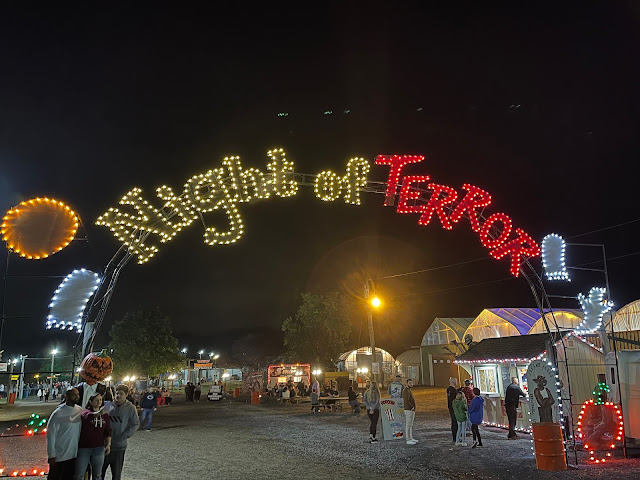 Welcome back everyone to another edition of HH365.com! Tonight our travels led us to Mullica Hill, New Jersey and Night of Terror at Creamy Acres Farm. Night of Terror, we believe they are in their 26th year according to a sign inside one of the Attractions. Night of Terror was one of my first Haunts that I have visited. This year we brought some fans with us as pictured below. 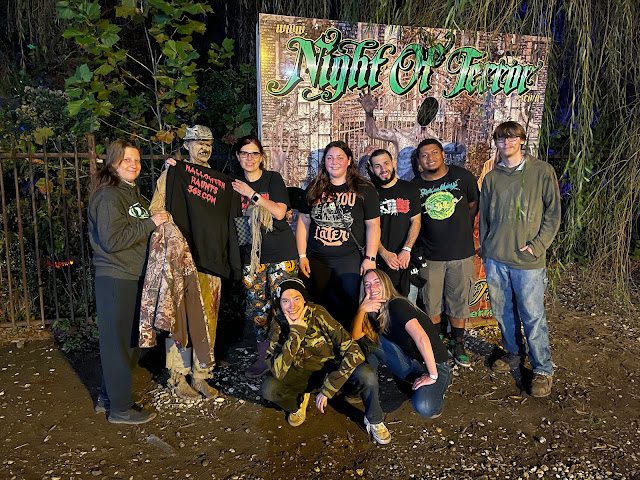 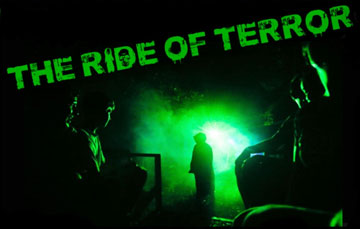 We hoped on the Hayride and we were instantly surprised. The first scene was brand new and pretty greatly detailed. Many more followed suit and the Actors were outstanding! This hayride was one of the longest shows we have been on this year. It felt never ending and we enjoyed that to the Max! There was a lot more scenes then most Haunted Hayrides with great lighting and animatronics. The did however miss an opportunity to put some of the electric crackers in a "Shocking" scene but other then that, this Hayride scored nicely. Here is the scoring of Ride of Terror.

After The Ride of Terror you enter into The Harvest 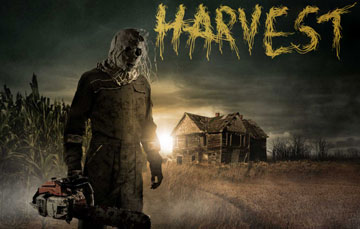 Harvest was once a Haunted Corn Maze that must have been hell on output because I would be trapped in there for at least 30 minutes each time. Harvest is one hell of an Improvement from that crazy corn maze! Harvest had the entire group jumping out of their shoes as the scares are hard to see. Then it turns into more intense scenery. Harvest was great mix of the old Corn field and a Haunted Walk through. I am upset we missed the bubble machine though as telling by the residue and mud. That had to be a shit ton of bubbles! Let us get to the scoring!

Next up for the night was The Playground. 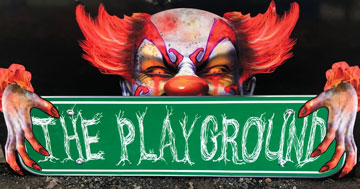 The Playground was probably my favorite Attraction of the evening. This 3-D Clown Playhouse is beautiful done and has some of the coolest effects of the night. From chainsaws in colors that we have never seen to high quality props and great Actors, The Playground came to play! It followed the them of Night of Terror as you are inside the playhouse for a great amount of time. There is so much to see with the 3-D glasses you almost have to go back to catch it all. Here is our scoring for The Playhouse in 2021.

a Four Bloodsplat you ask? This Attraction was basically a 4.9. It was right on the border of a 5.0. But we felt we needed one or two more jump scares to give it that 5 Blood Splat rating. We still LOVED this Attraction.
After The Playground, you are sent into Dark Dreams. Which has by far the best Façade at Night of Terror. I really wish I remembered to pull our the camcorder for footage for our evolving You Tube intro! Oh Well. Dark Dreams is a lot like what the title says. You are surrounded by some of your worst nightmares. It was a nice long walk through with many different rooms, including something for you Christmas weirdos out there. Dark Dreams did a great job with bringing some really creepy dreams to life! Let us get to the scoring of Dark Dreams.

That wraps up the Attractions at Night of Terror for 2021. These Attractions are very long and worth the wait and money. It feels like you are in there longer then you are with so much to look at and run from. They will entertain the biggest Haunt Fans and the Newcomers. With the Attractions, there is a nice "Fairground" outside of the Attractions to grab food and drink along with a lot of Photo Ops along the way. Sadly, we did not get to try the Brisket at the stand as we arrived too late. Let us put up the overall ranking for Night of Terror 2021.

There was one full 5 blood splat Attraction being the hayride. A couple were very close to 5 blood splats as well. We will look forward to see what 2022 brings for Night of Terror. Make sure you check out the video below of our Video Review of Night of Terror 2021 on You Tube. That is all we have for you today at Halloween Haunts 365.com. Also! All images of the Attractions are property of Night of Terror. We don not like using them but the signs did not really work for Photos and there was not really enough time to snap a pic as we were lucky enough to keep going and not wait in line!