Tuesday With The Movie Vlog 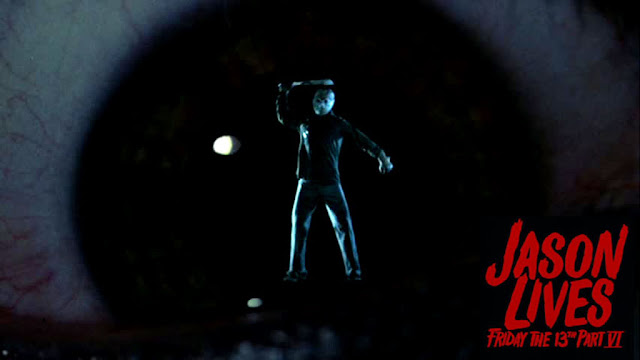 Story: "Tommy Jarvis goes to the graveyard to get rid of Jason Voorhees' body once and for all, but inadvertently brings him back to life instead. The newly revived killer once again seeks revenge, and Tommy may be the only one who can defeat him."
They open the film with an all new adult Tommy Jarvis, this time played by Thom Matthews. Tommy and his friend are going to the graveyard where Jason Voorhees is buried, because he needs to see with his own eyes that Jason is really dead. As soon as Tommy sees the body, he starts having flashbacks to the night that he killed Jason. He takes a metal fence post and stabs Jason repeatedly in the chest. Before he gets the chance to set Jason on fire, the fence post is struck by lightening. This wakes up Jason, and Tommy has to make a quick getaway.
Tommy goes straight to the police station to warn them about Jason. They do not believe him and instantly throw him in jail. Meanwhile, Jason is making his way back to Camp Crystal Lake and upping his body count as he goes.
Soon we are introduced to Megan (our new final girl), who is the sheriff's daughter. She takes a liking to Tommy immediately. They work together to break him out of jail, prove his telling the truth, and stop Jason once and for all.

Acting: I'll keep this short and sweet. I like all of the acting in this film. Thom Matthews is a horror treasure at this point, and I love everything he does. This is also my 2nd favorite Jason, played this time by C.J. Graham. I think all of the supporting characters are played well too. I love the daughter and father dynamic between Jennifer Cooke (Megan) and David Kagen (Sheriff Garris). It just all really works for me.

Fear Factor: I like this version of Jason a whole lot. I think he is super brutal and even harder to kill now, because he is undead. CJ Graham makes a very menacing Jason and that's why this version of him works so well. I don't think I'm alone feeling this way. I know a lot of people that think this is the best Friday film and the best Jason.

Originality: Once again, we have the same formula. Jason Voorhees kills a group of teens int he woods... EXCEPT THIS TIME HE IS A ZOMBIE. This is also the first time that they have actual children at the camp. It definitely raises the stakes for the third act of the film. I do need to point out that this sequel had a bigger budget that the previous three films. Maybe that's why this movie feels so much bigger. There are way more people in this movie, and they flip over an entire RV. Also, the third act of this movie has a lot more action than previous films. It really makes for an exciting entry.
One more thing that I love is Tommy and Megan as a duo. Tommy is brave and wants to take down Jason, unlike in part 5 where he spent most of the film crying. Megan is witty, also brave, and hilarious. She's one of my favorite final girls in the series.

Overall: If it isn't totally obvious, I love Friday the 13th part 6. I think it's super exciting, has fantastic characters, and they made their villain even tougher to beat. I love the humor that this film has. It works in the movie, unlike the one before it. The casting was perfect all around, and if you ever have the chance to meet CJ Graham, do not hesitate to meet him. He is one of the nicest guys, ever. Until the next review, don't go poking around in any graveyards kids.

This was my favorite entry to date. She Nailed it and I love this movie. Really made the Jason we all think of. Until next time. Keep it here every day!
Posted by Halloween Haunts 365 at 7:16 AM