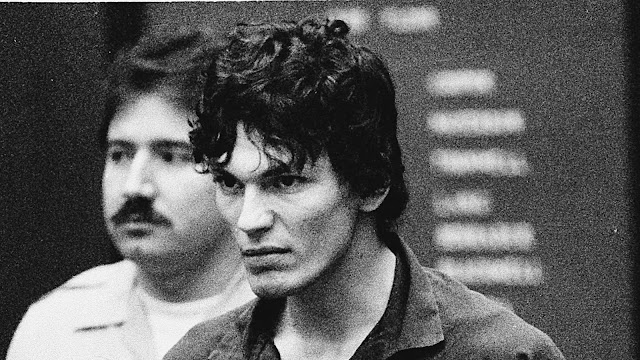 Welcome back to another episode of HH365! Today we continue our True Horror segment. Today we tackle "The Night Stalker" Richard Ramirez. Netflix put out on hell of a Documentary about Richard Ramirez recently and we recommend you watch it. Do not be surprised if you finish all of the episodes in one sitting as it really grabs you. Let us get to "The Night Stalker" and the lives that he changed.

Richard Ramirez, byname Night Stalker, (born February 29, 1960, El Paso, Texas, U.S.—died June 7, 2013, Greenbrae, California), American serial killer, rapist, and burglar who murdered at least 13 people in California in 1984–85. He was convicted and sentenced to death but died while in prison.

Ramirez grew up in El Paso, Texas, the youngest of five children born to Mexican immigrants. According to reports, when he was 12 years old, a cousin who was a Vietnam War veteran showed him pictures of Vietnamese women he had allegedly raped, tortured, and killed. The following year Ramirez was a witness to his cousin’s fatal shooting of his wife. Around this time, Ramirez began breaking into homes. After dropping out of high school, he moved to Los Angeles. He continued to commit crimes and was briefly imprisoned for stealing a car.

In June 1984 Ramirez committed his first known murder, raping and stabbing a 79-year-old widow. (In 2009 he was implicated in the April 1984 murder of a nine-year-old girl after his DNA was determined to be at the crime scene; however, Ramirez was not charged with the crime.) He then apparently waited some eight months before resuming his killings. Most of the deaths occurred in the Los Angeles area and took place during home invasions. Ramirez’s victims—some of whom survived—were often sexually assaulted and beaten, and Satanic symbols were found at many of the crime scenes. The “Night Stalker,” as the killer became known, created a panic that saw a surge in gun sales. Eventually a fingerprint was discovered that led to Ramirez’s identification. On August 30, 1985—six days after his last known murder—Ramirez’s name and photograph were released to the public, and the following day a man in East Los Angeles saw him and notified police. A chase ensued, and as Ramirez tried to steal a car, he was surrounded by a crowd and beaten until police arrived.

A self-described Satanist, Ramirez made various references to Satan during his legal proceedings; he notably drew a pentagram on his palm. His trial began in early 1989, and in September he was convicted of 13 murders and a variety of other crimes. Nearly two months later he was sentenced to death, with the judge stating that his crimes showed “cruelty, callousness and viciousness beyond any human understanding.” Ramirez never expressed remorse, and, after receiving his sentence, he stated, “Big deal. Death always went with the territory.” He was believed to have committed other murders and rapes but was never charged for any additional crimes. While on death row at San Quentin State Prison, Ramirez was diagnosed with cancer. He died in 2013.

Thank you to Brittanica.com for that look into this Horrible Demon. Let us hear from his Victims by posting their Identity so if one person can remember the name of one victim then it is worth the post. Again, there is no Glorifying here. These are Horrors and Atrocities that need to be remembered for the Hundreds of Thousands of people touched by people like this.

Jennie Vincow – The 79-year-old was killed by Ramirez on 27 June, 1984, when he also burgled her home in Glassell Park LA.

Dale Okazasi – On 17 March, 1985, Ramirez shot and killed 34-year-old Okazasi at her home in Rosemead, California, after also attacking her housemate Maria Hernandez, 20, who survived.

Maxine Zazzara – The 44-year-old was killed as part of the same attack as her husband Vincent Zazzara on 27 March, 1985.

Mary Louise Cannon – The 77-year-old widow was killed at her home in Arcadia, California, on 2 July 1985.

Joyce Lucille Nelson -The 61-year-old was beaten to death on 7 July, 1985, by Ramirez, who also burgled her home in Monterey Park.

Lela Kneiding – The 66-year-old wife of Max Kneiding was also killed on the same day (20 July, 1985) after Ramirez broke into the couple’s home in Glendale, California, which he also robbed.

Chainarong Khovananth – The 32-year-old was shot and killed while asleep in his home in Sun Valley in 20 July, 1985.

Elyas Abowath – Ramirez shot and killed the 31-year-old on 8 August, 1985 in Diamond Bar, California, during a burglary of the family home.

That is what we have for you today at HH365! Where Every Day Is Haunt Season!