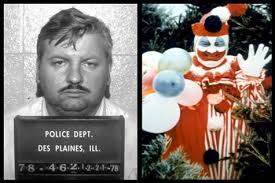 Welcome back to another edition of HH365! Today we continue our True Horror Segment with one mean son of a bitch John Wayne Gacy. This guy makes everyone's skin crawl and makes you want to take a shower. Let us get into one of the most Notorious Evils of this Century.

John Wayne Gacy, (born March 17, 1942, Chicago, Illinois, U.S.—died May 10, 1994, Statesville, Illinois), American serial killer whose murders of 33 boys and young men in the 1970s received international media attention and shocked his suburban Chicago community, where he was known for his sociability and his performance as a clown at charitable events and childrens’ parties.

Gacy was born into a blue-collar family and seems to have had a fairly ordinary childhood. But he exhibited a growing tendency toward sadism, which resulted in several encounters with the law in the 1960s. In 1968, after his conviction for sexually assaulting a teenage boy, he was confined in the Iowa State Men’s Reformatory (Anamosa State Penitentiary) and forced to undergo psychological evaluation. After his release in 1970 and while still on parole, he was again arrested for sexual assault, but the charges were later dropped. Gacy then became a fairly successful independent contractor and bought a house in suburban Chicago.

In 1978, after one of Gacy’s victims, Robert Piest, was reported missing, police learned that Gacy was the last person known to have seen him. After obtaining a search warrant, police discovered the bodies of 29 boys and young men in or near Gacy’s house; four other bodies were found in the nearby Des Plaines River. Indeed, the area of the house had emitted a foul stench for years, but Gacy had told his houseguests and his wife that the smell was the result of moisture buildup. At his trial Gacy’s plea of innocent by reason of insanity was supported by the testimony of several psychologists, who diagnosed him as schizophrenic, but was rejected by the jury, which found him guilty of all 33 murders of which he was accused; he was executed by lethal injection in 1994.

Thank you to Brittanica.com for their great info and bringing so much light quickly to this subject. Now, we like to shine a bright light onto the list of the Families effected by this Criminal.

Gacy told investigators his first murder victim was a teenage boy he picked up outside Chicago’s Greyhound Bus Station in the winter of 1972. Unlike his later victims, who were strangled, Gacy said he stabbed the boy in the chest. He was also the first of his victims to be buried in the crawl space beneath his house. In 1986, dental records identified him as 15-year-old McCoy, who had been traveling for the holidays, and had a bus layover in Chicago.

Gacy said he next murdered in 1974, and it is assumed his second victim was an unidentified white male, whose body was found buried in his backyard. The victim was between 14 and 18 years of age and it’s estimated he died between 1972 and 1975.

Butkovitch, 17, was one of several employees of Gacy’s construction company, PDM Contractors, who fell victim to his boss’ bloodthirsty desires. He went missing after going to Gacy’s to pick up a paycheck, and his remains were later found underneath the concrete floor of his garage.

In March 1976, Gacy’s divorce from his second wife, Carole Hoff, was finalized. With the house all to himself, his murderous impulses were unchecked. Sampson, 18, was the first victim of this two year blood-run. His body was later found buried underneath the dining room of Gacy’s house.

Reffett, 15, was last seen walking home from school. His body was later found in Gacy’s crawl space, dead from asphyxiation.

Gacy’s second victim in a single day, Sam Stapleton was just 14 when he disappeared on the way home from his sister’s apartment. He was buried with Randall Reffett in Gacy’s crawl space.

Bonnin, 17, was found buried in the crawl space with the ligature that was used to strangle him still around his neck.

Known to his friends as “Billy,” the 16-year-old was found buried in Gacy’s crawl space.

It’s assumed this victim was murdered between June and August 1976 due to his burial location in the crawl space. He was a white male between 23 and 30 years of age, who was missing his top two front teeth and wore a removable denture.

Long one of Gacy’s unknown victims, 16-year-old “Jimmy” Haakenson was identified in July 2017 thanks to DNA evidence. He had run away from his home in St. Paul, Minnesota, in the summer of 1976, but called them on August 5 of that year to tell them he was in Chicago. It was the last they would ever hear from him.

Johnston, 17, was last seen going to a rock concert at Chicago’s Aragon Ballroom. Afterwards, he was supposed to call his mother for a ride home, but she never heard from him. His dead body was found in a stack with Haakenson and another unidentified victim.

This unknown victim was between 18 to 22 years old and had dental problems at the time of his death.

this unidentified white male was between 15 to 24 years old at the time of his death.

Friends Parker, 16, and Marino, 14, were last seen hanging out together on Chicago’s North Side, and they were reported missing by their parents the following day. They were strangled and buried together and later identified by their dental records. In 2014, Sherry Marino, Michael’s mother, had both bodies exhumed and claims DNA tests show that the remains given to her are not her sons, who she believes is still alive. Meanwhile, the Cook County Sheriff’s Office and medical examiner stand by their findings.

Bundy, 19, occasionally worked for PDM Contractors and went missing one night after telling his family he was going to a party. Though his family had always suspected he was one of the victims found in Gacy’s crawl space, his remains weren’t identified until 2011 when his surviving siblings provided DNA samples to police.

Godzick, 17, had only worked for PDM for a short time before he went missing after dropping a girl off from a date. His wallet was found during a search of Gacy’s home, and it was later confirmed that his remains were among those found in the crawl space.

Known as “Johnny” to his friends and family, the 19-year-old was another PDM employee who went missing and whose remains were later found in the crawl space.

This unknown white male was between 22 to 33 years of age and was found in possession of a key fob with the name “Greg” on it.

Michigan native Prestidge was visiting friends in Chicago when he had the misfortune of crossing paths with Gacy. The 20-year-old's body was later found in the crawl space.

At some point before his death, this unknown white male had his left clavicle broken and was between 17 and 21 years old.

Bowman, 19, was found in Gacy’s crawl space with the rope used to strangle him still wrapped around his neck.

Gilroy, 18, was the son of a sergeant on the Chicago Police Department, who lived four blocks away from Gacy at the time of his disappearance.

Mowery was a 19-year-old US Marine who was studying to become an accountant. According to CBS Chicago, he had gone to Gacy’s house to inquire about work and never returned.

A 22-year-old University of Minnesota architecture student, Nelson traveled to Chicago with a friend, and he was last seen at a dance club when he went missing. His remains were later found in the crawl space.

Originally from Kalamazoo, Michigan, Winch was just 16 years old when he was murdered. His remains were later found in the crawl space.

A 20-year-old father of one, Boling was found in Gacy’s crawl space, dead from strangulation.

Like John Mowery, Talsma was a 19-year-old US Marine. He was identified on what would have been his 21st birthday.

Kindred was 19 years old and was the last of Gacy’s victims buried in the crawl space beneath his house.

Only 20 years old at the time of his death, O’Rourke was the first of four victims Gacy dumped from a bridge into Illinois’ Des Plains River, after his crawl space had become too crowded with dead bodies.

Landingin’s body was discovered in the Des Plaines River. The Washington Post reported a pair of underwear had been stuffed in the 19-year-old's mouth, and investigators determined he had died from strangulation, not drowning.

Mazzara was 20 years old when he went missing on Thanksgiving Day 1978. He was later found in the Des Plaines River, and evidence found in Gacy’s home tied him to the crime, according to The New York Times.

Gacy’s final victim was 15-year-old Robert Piest. Prior to his disappearance, he had been seen in the pharmacy where he worked talking to Gacy about a summer job at PDM. Police began investigating Gacy after learning about his history of sexual abuse, leading to the search of his home and the discovery of 29 of his 33 victims. Piest, however, was not among those found. His body was eventually pulled from the Illinois River on April 9, 1979.

Well, That is a lot of names. Simply Horrifying. That is what we have for you today at Halloween Haunts 365.com. Where Every Day Is Haunt Season!