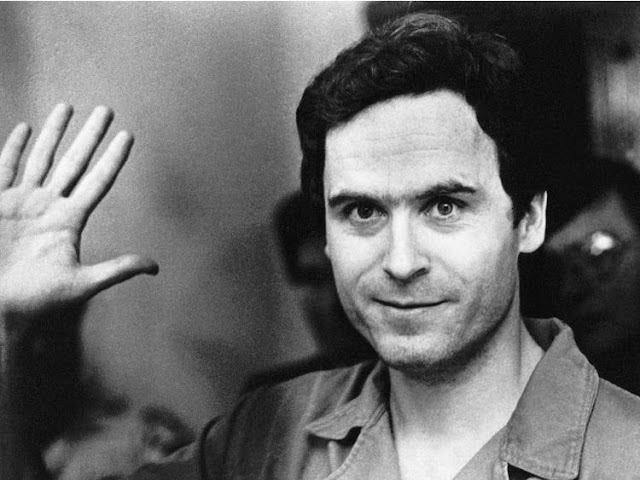 Welcome back to another edition of HH365! Today we begin our new feature, True Horror. We understand that Horror exists in a form out side of Movies, Books, Haunts and Music. Some Horror hits home and changes peoples lives forever. We find it important for the families of victims to speak about the Atrocities some of the most Evil people in America have done. These families and their stories should never be forgotten. I am against the glorification of these pieces of trash. This is more about another angle of Horror and to remember the lost. Not all Horror is good Horror and this segment will show that. We will be covering some of the most well known and some unknown Evil personalities that have walked the earth and changed peoples lives forever. We will also cover True Hauntings and possible Frauds in the Horror and Haunting communities. Let us get to today's topic.

Today, with the help of the Internet, We will take a shallow dive into Ted Bundy. The Charismatic Killer.

Bundy had a difficult childhood; he had a strained relationship with his stepfather, and his shyness made him a frequent target of bullying. Later, however, his intelligence and social skills enabled him to enjoy a successful college career, and he developed a series of apparently normal emotional relationships with women. Despite this apparent stability, he sexually assaulted and killed several young women in Washington, Oregon, Colorado, Utah, and Florida between 1974 and 1978. Although he would ultimately confess to 28 murders, some estimated that he was responsible for hundreds of deaths. Following a well-publicized trial, he was sentenced to death in 1979 for the murder of two college students. In the following year he again was sentenced to death, this time for the rape and murder of a 12-year-old girl. Bundy was executed in Florida’s electric chair in 1989.

Despite the appalling nature of his crimes, Bundy became something of a celebrity, particularly following his escape from custody in Colorado in 1977. During his trial his charm and intelligence drew significant public attention. His case inspired a series of popular novels and films devoted to serial murder. It also galvanized feminist criminologists, who contended that the popular media had transformed Bundy into a romantic figure.

The above was from Brittanica.com.

Here is a list of the Victims of Ted Bundy. May they always be remembered and become a tale of warning.

Ted Bundy will remain in Hell where he belongs. It hits differently when you can actually see the lives that were either ended or destroyed by such an Evil force of nature.

That is what we have for you today in our new segment True Horror. Keep it here to HH365! Where Every Day Is Haunt Season!