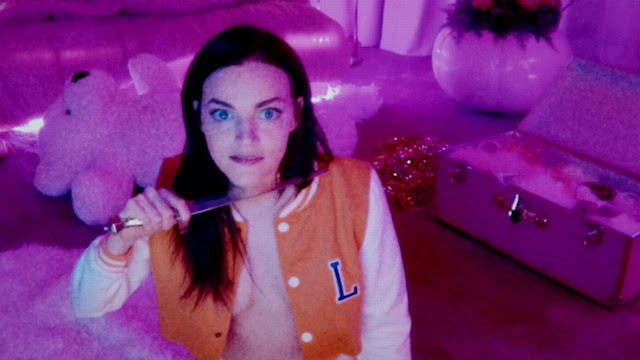 Welcome back to Halloween Haunts 365.com Today we will bring back our Movie Review Segments since we have a lot of Horror on its way as we get back to normal. I will confess. I highly doubt I will be able to match what our great friend was able to do about a year ago. Her reviews were detailed and full of facts and she will be missed. But! The show will go on! Today, We will take a look at a pretty interesting film "CAM".

Cam was released by Netflix on November 16th 2018. Directed by Daniel Goldhaber and Written by Isa Mazzei from a story by Goldhaber, Mazzei and Isabelle Link-Levy. The story is partially drawn from Writer Maazei's experience of working as a Cam-Girl. It is interesting to note that the Horror Magnate in recent years, Blumhouse has a finger or two in the production process.

Cam is a story about a young woman named Alice Ackerman who works as a Cam-Girl on a fictional website that ranks all the Women against each other. Alice aka @Lola_Lola is on a mission to break into the top 50 as the film opens. There is no end in sight for what Alice will do to achieve the Top 50 and more all while keeping it a secret from her Mother. From fake suicides to riding am extreme vibrator fully nude that is controlled by the chat in the website, Alice will stop at nothing to become the Top Girl. The day after her biggest show, she notices that her site has been taken over by someone that looks exactly like her. Even her most loyal fans do not notice that it is not the real Lola_Lola. At the same time Alice is fully locked out of her account and basically erased from the website. That is when the mystery begins and to find out more you must watch the movie. No Spoilers at HH365!

I will be doing "No Holds Barred" Reviews. You may not agree with me on most things and that is great! Feel free to reach out to us to let us know what you think. All of our Contact info is just to the right of this text! Let us get to our thoughts on Cam.

The cast we really enjoyed. Madeline Brewer played Lola/Alice and did a phenomenal job. She kept me tuned in and really put on a show with the range she has. From a spoiled brat to a warrior. The change she makes on screen kept me watching even though I hated how the movie ended and what really happened. I was really hoping for more sinister ending but we did not receive. She made the film watchable and entertaining.

The writing was also great again up into the end. In the world of Twitch and Onlyfans, this risk is always there and can really happen. But with this movie listed as a Horror, I wanted some Horror. Maybe a shapeshifter, I don't know. Something!

With the good story and great performance, I really wish this movie did not fall on its self with the weird outcome. Even with the Gory ending, It still fell flat in our head. But! I still consider it worth the time to watch! May even watch it again to see if I missed anything that could have added to it. Let us get to the scoring.

Our Overall Ranking. The Actress saved it and made it rewatchable. One Hell of a Casting!

That is our Movie Review of Netflix's Cam. Watch it for yourself and see if you ended up where we did!
That is all we have for you today at Halloween Haunts 365! Where Every Day Is Haunt Season!