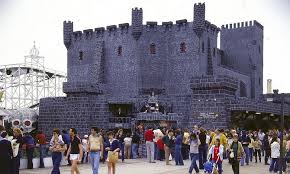 Welcome back to another edition of Halloween Haunts 365.com. Today we go back into the past and dig up a relic of the Jersey Shore and the Haunted Attraction Community. Castle Dracula. We have covered other historic Haunts such as the ill-fated Brigantine Castle and the Horrible past of Six Flags Haunted Castle. Let us continue with another New Jersey staple with a sad ending. The picture was not us and we take zero credit for it even though we wish we could go and shoot it for you.

In my favorite Shore Town Wildwood, NJ stood an epic representation of the past and doors to the future. Castle Dracula or Dracula's Castle as some called it was a walk through dark ride on the Wildwood boardwalk. The Nickles Family built Castle Dracula in 1977. It was a combination of walk through and Dark boat ride. It was built on top of a pre existing old mill ride which was constructed in 1919. This ride became the Dungeon Boat Ride and the top level became Castle Dracula. Although the Castle was two stories tall, only the bottom half was used for the Attraction. The above level was used for storage and maybe one day to expand the Haunt.

Unfortunately, Castle Dracula met its drastic death on January 16th 2002. The Nickles had planned on rebuilding the majestic Castle but from what we can see there were a ton of obstacles in their way with permits and so on. Sadly, Castle Dracula is gone forever.

The cause of the fire was Arson. It was claimed to be an accident as the two charged were Teenagers who broke in to the Attraction and used rags and aerosol cans to try and see around the Attraction. The building went up and the 5 Alarm fire started. It took out the building and part of the boardwalk.

All that stands there now are a bunch of little huts housing Retail and food. Directly across is Mariner's Landing also known as Morey's Pier since they own all three piers now. Another sad tale from New Jersey and Haunted Attractions.

That is all we have for you today at HH365! Where Every Day Is Haunt Season!