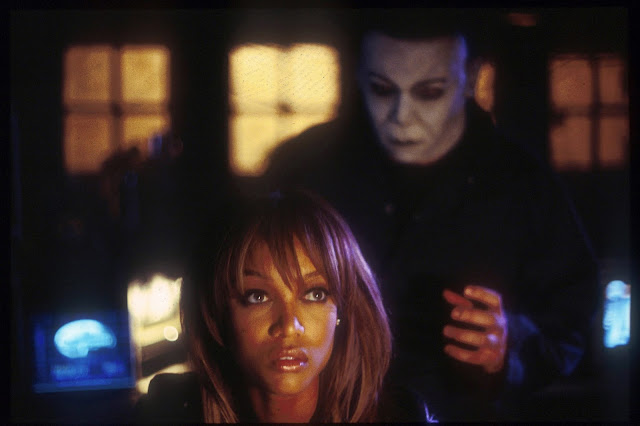 Welcome back to another edition of Halloween Haunts 365.com. Today we take a comical look at a terrible movie but a movie apart of a Franchise so we must do some Fun facts about it! Halloween Resurrection. We can go on and on for years about the problems with this movie so we are just going to hop right into some entertaining facts about it! Lets go!

1.Was first named "Halloween: The Homecoming", but producers wanted a title that said Michael Myers is alive so in February 2002, the film was officially named Halloween: Resurrection (2002).

2. John Carpenter has stated that the movie made him cringe.

3. Several new endings were written during production and the cast was never sure how the film was actually going to end. Four different endings were filmed, and the director wanted the studio to ship a different ending to each theater, a technique used before during the theatrical release of Clue (1985). However, the studio disagreed and the endings now appear on the DVD and Blu-ray.

4. Bianca Kajlich cannot scream and her screams had to be dubbed in post production.

5. Actors Brent Chapman and Kyle Labine, who have small roles in this movie, went on to appear in Freddy vs. Jason (2003). This makes them the only two people to be in a Michael, Jason, and Freddy film.

6. The name of the psychology professor at Haddonfield University is Dr. Mixter. This was also the name of the doctor in Halloween II (1981) that treated Laurie Strode (Jamie Lee Curtis) and was killed by Michael Myers with a needle in the eye.

10. Michael's use of a spiked leg of a tripod as a weapon is an homage to Michael Powell's Peeping Tom (1960).

Well. Thank you to the internet for some interesting facts about what some call a ridiculous Movie. Well, We move onto Rob Zombie's Halloween and I cannot wait!

That is all we have for you today but keep it here to Halloween Haunts 365.com! Where Every Day Is Haunt Season!