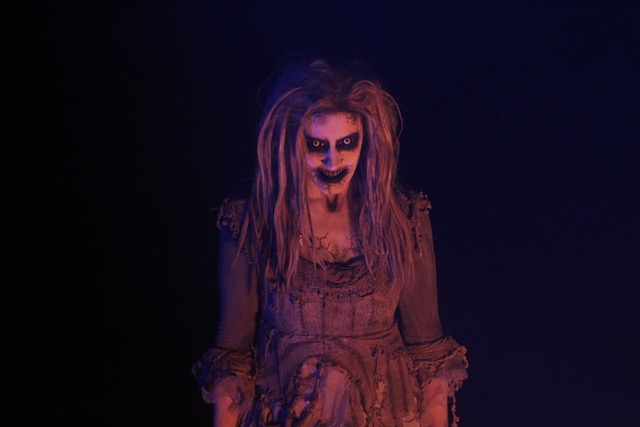 Welcome back to another edition of HH365! Today we continue with another interview from across the pond in Ireland. Today we meet The White Witch. Let us begin the interview!

1. How long have you been Haunting for?


2. What brings you back to haunting year after year?

I’m a horror nerd underneath it all. I have always been the weird girl who collected dead things and made weird stuff at school. Now I do it for a living, the acting is just the cherry on the cake for me.  Getting into costume to me can be very therapeutic, you can do a lot of good in releasing stress and physically moving in a way that not only helps bring the character to life but also helps you through some heavy stuff in one month that no therapist will do in 10 years. It’s given me confidence in who I am as a person by pushing me out of my comfort zone year on year, I’ve met my best friends and found my niche. Ask any haunter, its challenging in every way but at the end of the day its so rewarding.


3. Where did you start Haunting?

I’ve been a little creep since I was a child but professionally I’m proud to say I’ve been haunting with the same haunt since 2011, The Nightmare Realm in Dublin, Ireland. They’ve been voted Europe's Best Independent Haunt Attraction this year which was a really proud moment for everyone involved.


4. What is your favorite part of a night in the Haunt?

Opening hour. The buzz and atmosphere is deadly, the customers are lined up waiting to go into the first haunt and all want to get photos with me and (another scare actor) Molly as we’re the haunts ‘icons’ they see us the most. We have free reign of the haunt spaces indoor and outdoor so we’re literally everywhere. You can’t get away from us. Sometimes it feels like the other way around though, some people are serious fans :)


5. What is the worst part of working in a Haunt?

The verbal sexual comments from not only men who should know better but children who don’t understand what they’re saying.  It just really highlights whats wrong with society in my opinion.


6. What is your all-time favorite scare onto a customer?

I actually don’t have a specific one. A whole bunch come to mind over the years. The most satisfying scares are when I don’t try too hard and the tough boys still get freaked. Last year a teenager squared up to me aggressively showing off in the queue to his friends, I wasn’t even trying to prove myself to him so I just growled suddenly after a long while of simply staring at him. He actually jumped so hard that he fell on to his ass from standing. Everyone saw, the security guards broke their shite laughing and I gave him the knowing ‘that is not how you treat haunters’ look and walked away to the crowd cheering. It was satisfying to say the least.


7. What is your Favorite Haunted Attraction outside of your Haunt?

I haven’t been to any other haunts in Ireland because I’m always working in October! but there is some really cool haunts in England I’ve been to over the years, Thorpe Park have Fright Nights and Alton Towers have some great mini haunts. I’ve been to Halloween Horror Nights as well which I loved for the perfect sets and setting.

8. What is your favorite Theme in a Haunt Attraction?

Anything witch-y, set in the woods, Blair witch or Outlast style. I love the pagan ritual vibes, nasty gritty and grimy. Chainsaws, cornfields and clowns just don’t do it for me.


9. Do you have further plans with the Haunted Attraction Industry?

I’d love to work in American haunts as a travelling guest act. Maybe one day!


10. Where does your inspiration for your Character come from?

My character is only known as the White Witch, originally because the costume being all one colour - off white. Which now over the years has turned pretty grey.. She doesn’t have a first name, doesn’t blink or speak. She’s not nice, she’s actually pretty gross and nasty. She spits and dribbles black gunge from her mouth, she’s a crawling, demonic, contortion bending, growling, staring entity. She’s not a typical witch, shes more of a possessed rabid zombie. Her loose backstory is that she was released from a Ouija board by accident and has been here to stay ever since.  I say ‘she’ because I’m female but the character itself has never specified the gender, I’m always getting called a man when im scaring which I find hilarious, so I’ve never confirmed or denied if the witch is female. People also think the witch is in some form of relationship with Molly Mayhem, which neither of us have confirmed or denied adding to the drama.

Just getting back into my character full time and growing the online audience around her. The witch has always been the realms ‘scariest’ character and people always want a photo but don’t want to stay close for too long. Last year Molly pushed the witch to be more social, she got instagram for the first time. So this year im looking forward to navigating that side of things, letting the audience see my character on screen was always something I was interested in but never wanted to do because of online hate. People are really verbal about my character in real life so I didn’t fancy getting that online either. People will still be scared of the character because she’s nasty but hopefully with an online platform they will appreciate the character more. So far people have been really lovely!

12. Do you expect Haunt Season 2020 to be vastly different than other seasons?

Hard to know. In some ways I know the irish are mad to get back to having a schedule and some form of normalcy, with events being closed all summer I feel like we could be really busy when we are open in October. Our audience is mad to get out and do something, we would be the first event open this year. That is a scary thought! In other ways then there is definitely a fear of a 2nd wave of Covid so there is always that risk.


13. How long does your make up setup take per night?

As an icon of the haunt I have a specific look that requires the same artist every night, Icons are in the seats first because we have to be ready for the public first. I sit for airbrushing for 10-15 minutes getting contour and white out and after that I spend 30 minutes adding in finer details like veining myself then the wig goes on. So around 45 minutes. We have a lot of actors so I’ve had to learn how to do 75% of the makeup myself to save time for our artists.


14. How often do you work on your Character?

Because the character is owned by the business and not my own original creation, outside of October I usually jump into costume for sponsored work events, photo and video shoots. With the boom in TikTok and now the witch having instagram I’m in costume for work a lot more than haunt season!

15. What do you do for a living outside of haunting?

I work in the building industry creating props, sets, costume and masks predominately for the haunt I work for as well as other companies. I also work in media marketing specializing in social media.


Thanks for the interview!

Wow Another great interview from our favorite people in the Haunt Industry, Make sure you keep it here to HH365! Where Every Day Is Haunt Season!
Posted by Halloween Haunts 365 at 8:07 AM