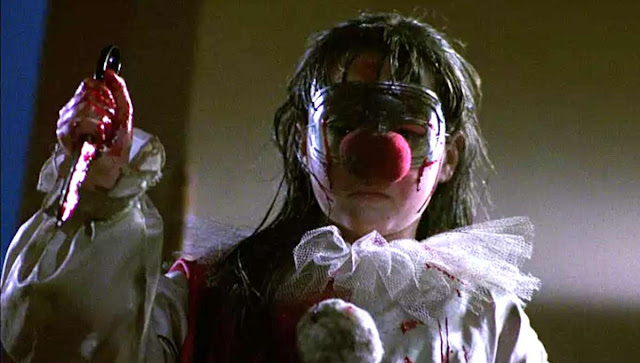 Welcome back to another edition of HH365! As you can see we skipped Halloween III because it really does not with the Franchise theme of Halloween but let us get started with 10 fun facts around Halloween IV The Return Of Michael Myers.

1. Danielle Harris sold the clown costume to a fan. I would have loved to have that hanging on the wall.

2. The girl Lindsey who drove Rachel and Jamie to the discount mart was going to be revealed as Lindsey Wallace from Halloween (1978) and have a larger part in the film as Rachel's friend and helping her babysit Jamie, but that was cut for budget reasons. The third boy hanging out with Brady and Wade in the drug store was meant to be Tommy Doyle from the original film.

3. Jamie's name in the original script was Brittan "Britti" Lloyd but was changed in honor to Jamie Lee Curtis.

5. The Vincent Drug Store that Jamie goes to buy a costume from is seen five years later in The Sandlot (1993) when Smalls is on his way to the "Sandlot" for the first time.

6. This film is the first time Michael Myers was credited with a name other than "The Shape", the credit given in parts 1, 2, and 6.

7. Melissa Joan Hart auditioned for the role of Jamie Lloyd, but didn't get it. Carmen Filpi, who played Reverend Jackson P. Sayer in this film, later went on to guest star in an episode of Hart's sitcom, Sabrina the Teenage Witch.

8. George P. Wilbur (Michael Myers) has said in an interview that his favorite kill in the movie is when he kills Kelly by pinning her to the wall with the shotgun.

9. The body count for this film was an impressive 19 including a pet.

10. The original ending had Rachel go upstairs to take a shower and replace the dirty, blood-stained clothes she was wearing only to have Jamie sneak up behind her and stab her to death.

Wow so those are some pretty cool facts that I did not know about the Franchise! Keep it here for more every Friday! Only at HH365! Where Every Day Is Haunt Season!
Posted by Halloween Haunts 365 at 8:06 AM