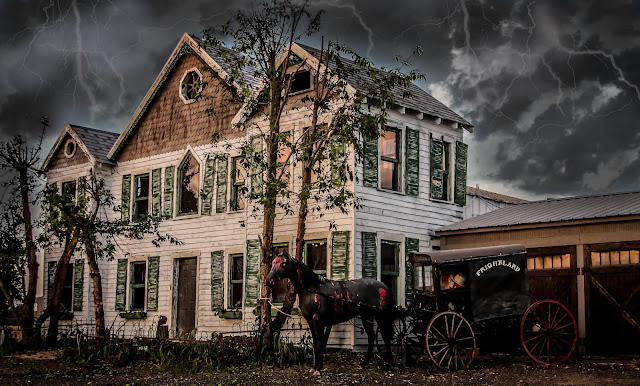 Welcome back to another episode of HH365! Today we will take a look at some of the advantages and disadvantages of both Indoor and Outdoor Haunts. The picture above belongs to Frightland and I love it so I borrowed it. I have one close but I am nowhere near a photographer. Speaking of, If you want to take pictures for us feel free to reach out at halloweenhaunts365@gmail.com. We would love to add more art to our site! Well, let's continue to our segment.

Everyone has their favorite Haunt Format. Some enjoy the hayrides that most outdoor Haunts offer and some love the indoor non stop action that indoor Haunts offer. Unfortunately, there are downfalls to both which make this an interesting conversation. Let us begin with Outdoor Haunts.

When you look at Outdoor Haunts, a lot of them offer a Hayride. Something Indoor Haunts cannot offer. They can also have indoor attractions when they are outdoors. But a lot have open ceilings due to fire code and not being able to equip the proper fire code which can take away from the theme of an Attraction. Outdoor attractions usually also have more room to expand and change their Attractions. The biggest downfall that Outdoor Haunts have to deal with is the weather. Sure, with some roofed attractions out doors and can open some of the Attractions, weather can really hit a Haunt big time especially ones that offer a Hayride. We have seen the weather destroy and entire Haunt and its season. A few bad showers and so little days open can devastate an Outdoor Haunt.

Indoor Haunts usually seem a little less popular. From the Haunts we have been to their Outdoor out number the Indoor by a ton. One of our favorites is an Indoor haunt and all the rest are outdoor. The downfall to indoor haunting is space. Its easier to manage a sprinkler system then outdoor Haunts but they can be very limited in space which can be hard to add or manage your Haunt. They do not have to worry about the weather as much but have to add extra tom their Attraction to bring the butts into the queue line. I have seen more indoor Haunts fail due to not being able to change and not being able to claim the repeat customer. Each kind of haunt has its perks and its problems.

Just a HH365 look into the different kind of Haunts that we have visited and reviewed. There is a lot of room in the Haunt Community in both so make sure you visit them all, Indoor and Outdoor. Keep it here to HH365! Where Every Day Is Haunt Season.
Posted by Halloween Haunts 365 at 11:40 AM