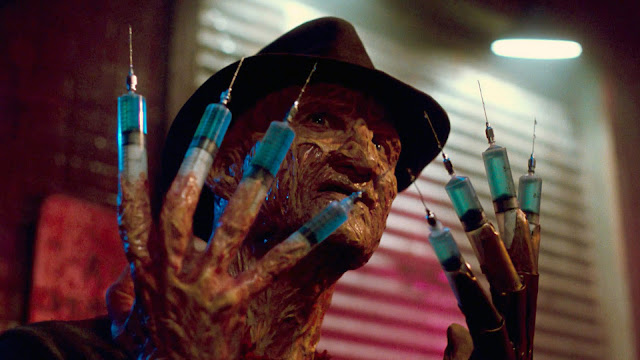 Welcome back to HH365 for another episode of Fun Facts Friday. Today we will go over ten fun facts of A Nightmare On Elm Street 3, The Dream Warriors. Easily one of the best movies of all time and of the franchise. Let us get to the fun! Here we go, Number 1!

#1. This was the film debut of Patricia Arquette who played Kristen.

#2. In the original script. One of the Dream Warriors dreamed about a giant Transformers like robot to fight Freddy. The sequence even made it into the storyboards stage, but budgetary constraints made filming that scene impossible.

#3. Wes Craven had nothing to do with A Nightmare on Elm Street 2, Freddy's Revenge because he did not believe it could be come a Franchise. After Nightmare 2 grossed more then the original he changed his mind and came in to write the story for Dream Warriors.

#4. This is the first movie to use the name Freddy for Fred Krueger. All previous movies called him Fred. Starting the legacy that became Freddy.

#5. Karen's Head was written to explode after Freddy injected her with the needle glove, but the prop looked terrible so they went another direction.

#6. The Fire Department always had to be on set when shooting the Boiler Room scenes as the gas and smoke was so thick it would constantly make the Cast sick.

#7. One of the Freddy gloves stolen from this set ended up in another film. It was hanging up in the wall of the shed from Evil Dead II. It was an on going rivalry between Wes Craven and Sam Raimi.

#8. The original premise for this film was completely different, it was turned down by the studio. Wes Craven ended up using it for A New Nightmare in 1994.

#9. Winona Ryder originally auditioned for the role of Kristen. Director Chuck Russel felt she was too young for the role.

#10. When Phillip is sent out of the clock tower to his death with the menacing Krueger in the background. You can clearly make out the yellow airbag in the bottom right of the screen.

That is what we have for you this week on Fun Facts Friday. Make sure you keep checking back! We are getting close to Haunt Season and will have some news coming out of your favorite attractions. So keep it here to HH365! Where Every Day Is Haunt Season!
Posted by Halloween Haunts 365 at 10:22 AM