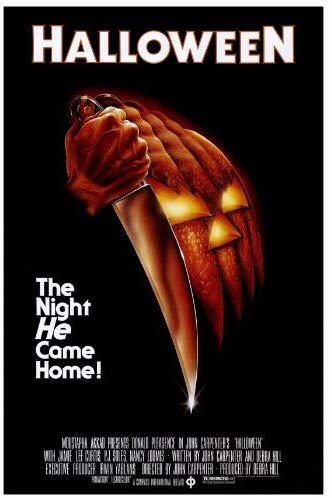 Welcome back to another installment of HH365! Today we take a look at ten fun facts from Halloween (1978), one of the original slasher movies of our time. It was an interesting film for its time so I am sure we can find facts that not a lot of people know. Let's get started.

1. The famous mask was actually a Captain Kirk mask designed after William Shatner. The mask was purchased for one dollar and was painted white and had some of the features removed like eyebrows and sideburns.

2. Michael Myers was named after a British film promoter who helped John Carpenter with his last film.

3. The original script for the film was named "The Babysitters Murders". But with lack of budget, the movie all had to take place on one night.

5. After a Critic claimed that Halloween was not very scary, John Carpenter decided to compose the entire score in just three days.

6. The overall darkness of the film was not intended but because the crew could not afford more lighting.

7. Myers is called "The Shape". This was a reference to The Salem Witch Trial Judges who referred to spirits who harm other "Shapes"

8. The knife sound effect was produced by stabbing a water melon with a knife.

11. Because the film was filmed in the spring time, leaves were hard to come by. The crew would paint paper leaves and spread them around for shots. Once shots were completed, the crew would pick them up and re use them for other scenes.