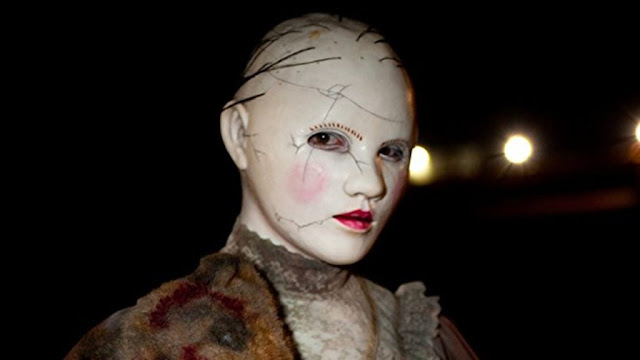 Welcome Back Everyone to another edition of  HH365! Today we will take a quick break from Haunt Reviews as we are waiting for some more to clear from across the country. Lets see what Tuesday's With TheMovieVlog is up to? Today she will cover.

Story:
"Five friends are stalked by a group of mysterious and disturbed individuals while on a road trip looking for the ultimate haunted house attraction."
During the opening credits, we are shown several interviews of guests and employees of haunts in different locations. They discuss how guests want the haunts to be as real as possible, without actually killing anyone. However, that doesn't mean that real death or real harm can't come to the guests. They talk about how one girl was hung in a haunt, and the people passing by just assumed it was all apart of the attraction. They also discuss how real criminals get jobs in haunts as well, just adding to the scare factor.
After these interviews, we are introduced to the five main characters. Zach, Jeff, Mikey, Bobby and Brandy are on the quest to find the scariest, most extreme haunts in America. They hit the road in their RV, and the horror begins!
The more haunts they visit, the more they realize that they keep seeing familiar faces at each haunt. Specifically a girl in a broken doll mask seems to be almost every where that they travel to. After four or five haunts, the crew is getting a little bored. When they catch wind of an extreme haunt in Louisiana, called "Blue Skeleton", they decide to check it out. Will this be the extreme haunt they have been searching for? Or is it all an elaborate plan to get our main characters alone and kill them? Let's watch and find out.

Acting:
I really love the chemistry between the actors. You truly feel like they are all real friends. The way they conversate and joke with each other really makes their relationships seem authentic. I didn't look up to see if these people really are close friends, or not, but it's still convincing onscreen. They just seem like they are having a blast making this movie. Even when things turn scary, they are all quick to have each others backs and it just seems very real.

Fear Factor:
It is so fun watching them do the haunts. I won't lie, I even jumped with Brandy a few times. The scariest parts to me would have to be the "real" danger that they seem to put themselves in. During one scene, all of the guys leave Brandy to go to the restroom on her own. A few hillbillies come into the women's restroom and tell her that they want to "make their own movie". Terrified, she runs from the bathroom. The guys say they will not leave her alone again. That's scarier to me than any of the fake haunts they have entered.

I hate to say it, but this movie has quite a few boring scenes. They happen in between the haunts, when they are just sitting on the RV and talking. I get why these scenes are there, but there are just too many of them. It doesn't add to the story, so it felt unnecessary.

Sadly, the final haunt isn't all it's built up to be. It's super underwhelming. I understand how it could be horrifying to the characters. As a viewer, I couldn't help but feel bored. They take almost an hour and fifteen minutes building up the Blue Skeleton haunt, but the payoff wasn't worth it. It almost feels over before it even begins.

Overall:
I think The Houses October Built is a decently fun watch for October. It gives you that eerie Halloween feeling, and has a couple good jump scares. I can't say it's a favorite of mine though. I find myself getting bored too often. I did like the characters and all of the practical make up on the employees of the haunts. I just wouldn't call this film ground breaking by any means.

Next week, I'm going to be reviewing the sequel called "The Houses October Built 2" (2017). "Recovering from the trauma of being kidnapped last Halloween by the Blue Skeleton - a group who take "extreme haunt" to another level - five friends decide they must face their fears in order to move on. Heading back out on the road to visit more haunted house attractions, signs of the Blue Skeleton start appearing again and a new terror begins." Check it out this week and join me next Tuesday for the review!

Thank you for the review! We will have a ton more Haunt Reviews coming down the pipeline so keep it here at HH365! Where Every Day Is Haunt Season!