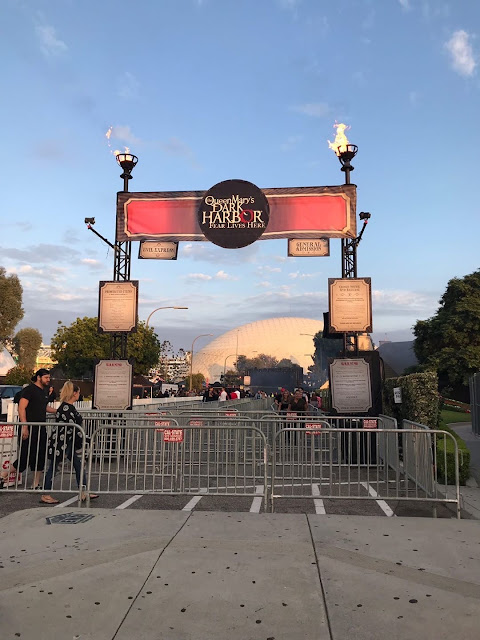 Welcome back to another episode of HH365! Today we will cross the continental United States and head over to Los Angeles, California for our first cross country review here at HH365! We want to take the time to thank Dark Harbor and their tremendous hospitality during their Media Night event. We were able to send a great friend of HH365 to head up this review for us. Let us get right to her review now and make sure you check out her website too!

The Queen Mary's Dark Harbor celebrated it's 10th anniversary with a vivid opening night, which was nothing short of amazing! The energy of the evening was filled to the brim with excitement and curiosity. The famed haunt has had everything from celebrity appearances, famous musical guests, and even now houses the actual swing ride from Michael Jackson's "Neverland Ranch."

It was the first time I had ever attended Dark Harbor, so I had absolutely zero clue what to expect which I greatly liked. Coming in with a fresh mindset for the scares to come, only heightened the experience.

Upon entry, there was a red carpet with some of the highlighted and seasoned charters from Dark Harbor. These characters have been masterfully woven into the theme of the haunt and continued story-line for each of the Dark Harbor mazes. Some of these characters include: Scary Mary, The Captain, and The Ringmaster. Photo ops were taken and it was fantastic seeing how impeccable the makeup and costume design was for these standout characters.

The entryway catered a fantastic happy hour with delicious drinks and a welcoming ceremony hosted by the charming characters to add to the experience.

The mazes all varied in size, location, and "newness." I decided to try the newest maze first called, "Rogue." 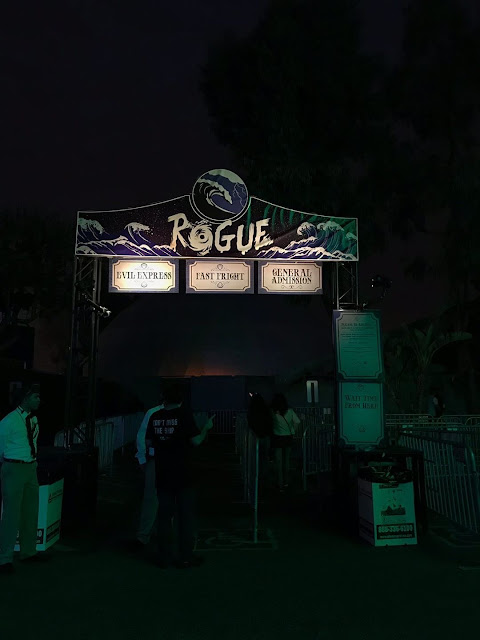 This maze was supposedly themed to tell the tale of "The Captain's" ill-fated experience. While there some fun animatronics involved, the jump-scares were minimal, as well as the overall feeling of the maze was very rushed. For being the latest and freshest maze, I felt as though it lacked the excitement and creativity that I encountered in mazes I went through afterwards. By the end of the evening, I would even consider it my least favorite maze, due to the fact that it felt dull and cumbersome. The immersive foam party at the very end was the best part of the maze, but far from scary.

The second maze I explored was my absolute favorite and was called the B340. 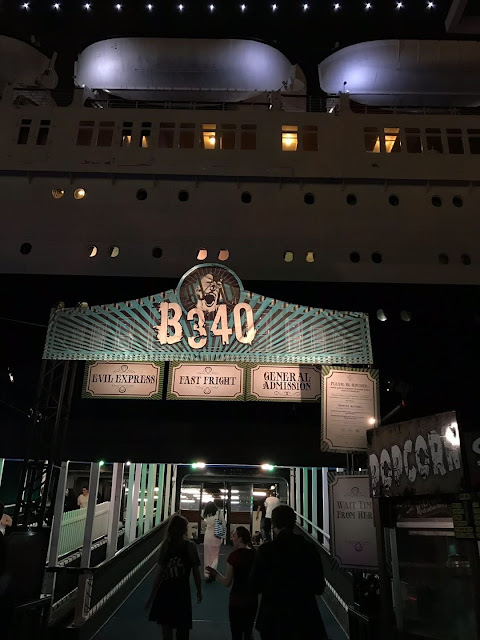 Not only did this maze allow you onto the ship, but the immersive experience of being thrown into dark areas of the ship (that are knowingly haunted), was incredible. I also found the animatronics and actors throughout the maze were most impressive. Hinging on themes like The Exorcist and Poltergeist, most of the visuals were incredibly creepy and well executed. I was even told to crawl on the floor into a tunnel, unknowingly where I was headed, which was scary and immersive. The other factor of this maze was the music. I can't express how much the music involved made the maze that much more fun, intense, and creepy. It was like a dark dance party met up with a haunted horror movie and had a baby.

The Lullaby Maze was the third maze and what I would consider to be my fourth favorite. 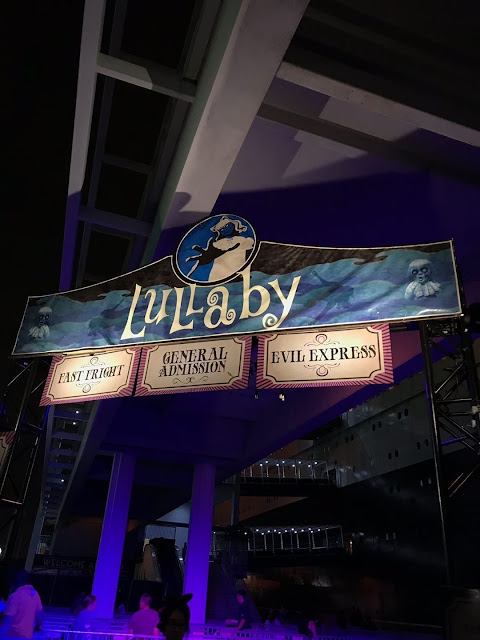 There was a scene that involved the ceiling and the color blue that will forever stick in my mind. The use of lighting and visuals was incredible throughout the entire maze. While Scary Mary made her appearance in the maze, I wouldn't consider it necessarily frightening, but more entertaining and visually stimulating. What I also enjoyed about the mazes that were on ship, such as this one, was that they seemed particularly longer, which made it that much more fun to explore and feel as though you're fully wrapped up in the experience.

The Feast was the fourth maze experience and quickly became one of my favorites! 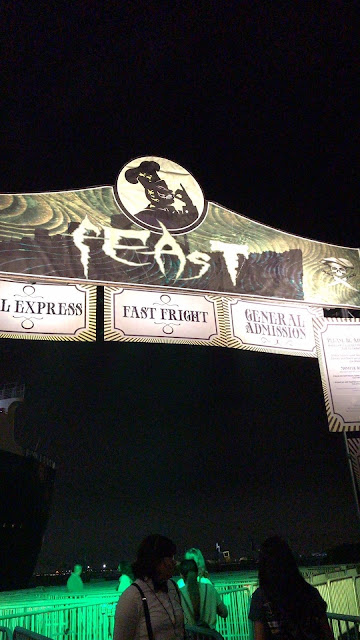 What stuck out to me most about the Feast maze was that it actually led you on the ship and through my favorite part of The Queen Mary, down in the Engine Room, which is legitimately haunted. I had wished there was more time to explore on my own down there, but the line had to keep moving and there wasn't an area to truly stop to explore. Despite that fact, it was incredible to be so immersed in the ship itself and to know that the scares that were happening in the haunt were both carried out by actors and an actual fear of walking through a world-renowned haunted ship.

Circus was the second to last maze and could only be described as fun and stimulating. 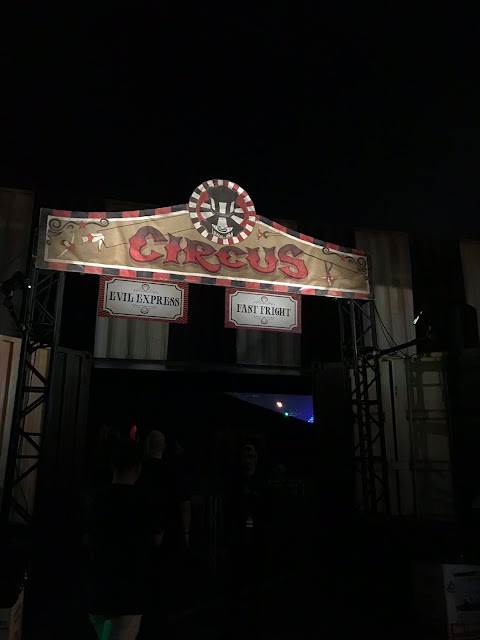 Nothing particularly scary about this maze, but more of an exploratory trip into the chaos of a freak-filled circus. The circus and rag-time theme was quirky to explore and there were some carnival and fun-house elements that definitely added to the laughs of the maze. Even if there weren't any major jump scares, I really enjoyed this one, because of how well on theme it was.

Last, but not least was the Intrepid maze. 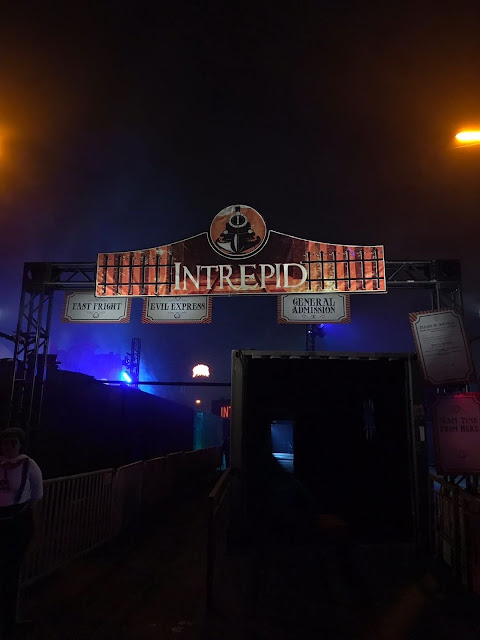 This maze would be considered my second favorite of them all. The overall vibe and aesthetic of the maze was the right amount of creepy. There were scenes in the maze that looked like they could have been pulled from classic horror films and even something like a giallo film or just as dark and creepy. There were two parts of this maze that I almost wish I could have lived in, because they were so perfectly constructed and had just the right amount of eerie beauty that could have been framed and placed up on a wall as a work of art. Without giving away too much, one involved a cemetery scene and the other a vintage church. Both were incredibly dark and sinister, yet had an essence of charming beauty. Even though this maze wasn't on the ship or even very long, those two scenes stood out so much to me, that it immediately became one of my favorite maze experiences ever.

Overall Score For Dark Harbor At The Queen Mary:

That wraps up Our Review Of Dark Harbor At The Queen Mary in Los Angeles, Ca. Thank you so much to our friends in LA for making it happen and check out her website at www.creepyst.com

Make sure you keep it here as we have a ton more content coming! Keep It At HH365! Where Every Day Is Haunt Season!