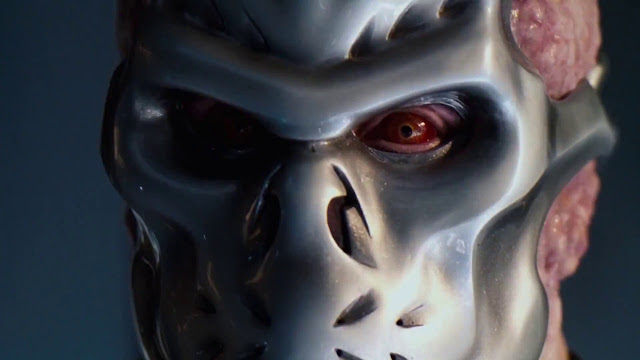 "Oh, this sucks on so many levels!"

Story:
"Jason Voorhees returns with a new look, a new machete, and his same murderous attitude as he is awakened on a spaceship in the 25th century."
During the opening credits,  we see a surgeon working on Jason. I'm assuming this is to bring him back to life. I don't know why anyone would want to do this, but it's done. We learn that it is the year 2010. We see a man (Dr. Wimmer) and our new final girl (Rowan) arguing over what to do with Jason. He wants to transport him across country to run tests on him, and she wants to freeze him. It doesn't really matter what either of them want because Jason escapes from the chains that he was bound in. He kills Dr. Wimmer and his entire team. Rowan leads Jason into the cyro chamber, and traps him inside it. He stabs her through the door of the chamber, which causes her to also freeze too.
Next, the film times jumps almost 500 years to the year 2455. We see a new group of people enter the cryo chamber. After finding Jason and Rowan, they take both of their bodies onto their spaceship and decide to thaw out Rowan. Jason, on the other hand, is presumed very dead and is sent to the lab for testing. They successfully wake Rowan up. Professor Lowe (the man in charge of all of the students on the ship) discovers who Jason Voorhees is, and that he could potentially be worth a lot of money. Rowan tries to persuade him to dump Jason's body off of the ship, but Lowe refuses. Meanwhile, one of Lowe's students is running tests on Jason when he wakes up. Immediately he begins killing once again, and no one is safe!

Acting:
Even though this movie is completely stupid, I do feel like everyone in the film took it seriously. I really don't have many criticisms for the acting in this entry. The stand out will have to go to Lisa Ryder, who plays Kay-Em 14. I think she did a great job, mainly because she is playing an android that wants to be like a real human girl. Her stiff acting plays well in this role, rather it was intentional or not. Kane Hodder did a great job in this movie. This is probably his most brutal portrayal of Jason, and it works for this futuristic approach to the character.

Fear Factor:
Let's be honest. This movie isn't in the least bit frightening. I will give credit to the practical effects though. When they use real make up for the kills, they look great. This entry has one of the best kills in the entire series (the one involving a head being smashed). I also enjoy a couple of the other kills. I won't give away the details in case any of you haven't seen this movie yet (even though you probably have by this point). The CGI is pure shit. It looks like a horrible space cartoon. They should have stuck to only showing the inside of the ship if they couldn't afford the effects to show the outside of it. It pulls you out of the film completely. Jason is seriously brutal with his kills, which I appreciate. Everything else, I can live without.

Originality:
Okay... it's in space... in the future! Stated the obvious there. When you boil it down though, the formula is the same. Jason Voorhees is awaken and kills a bunch of people. This time, he has access to new things, which is pretty cool sometimes. Sometimes, it's not. I just can't believe someone read this script, and said, "Yeah! That's a great idea!"

Overall:
I will admit this film has some nostalgic value for me, but I will also admit that I know it's total garbage. I enjoy the kills and Kane's performance, but that is about it. It's great for a "bad movie night", because it is a fun flick. That's it, though. Nothing more.
Next week I'll see you all on Elm Street!

Thank you for coming back to HH365. I have to agree with our movie reviewer on most of her points except the acting. Sure, the robot was good and I did not hate the 500 year old woman but the rest was so bad it really would have brought it down to a 2 for me. This movie does however hold one of the coolest kills in any slasher movie. Of course I am talking about the frozen head smash into a ton frozen pieces. That right there keeps this a playable entry if you are running a Friday the 13th Marathon.