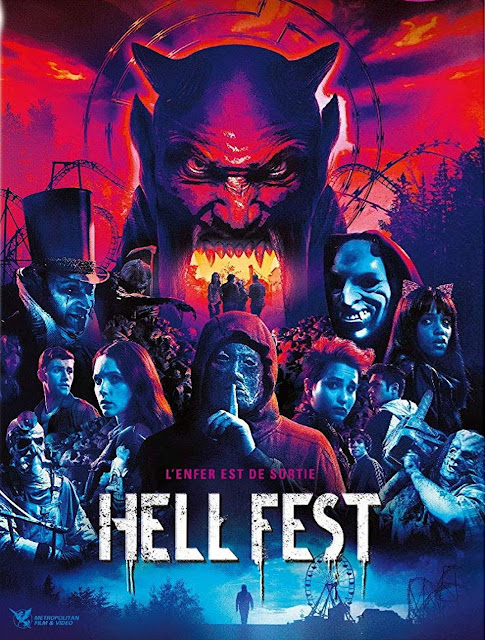 Welcome back to HH365! Today our Movie Review Specialist will start Haunt themed movie review! The season is now in full swing so let us get in the spirit with Hell Fest!

"That same guy has been following us the entire night!"

Story:
"A masked serial killer turns a horror-themed amusement park into his own personal playground, terrorizing a group of friends while the rest of the patrons believe that it is all part of the show."
The film opens with three girls walking through a Haunted House attraction. We notice that someone is following them around the maze in a mask and cloak. When one of the girls gets separated from her friends, she sees this man in the mask. She makes a comment about him following her around all night. He grabs her, stabbing her and hangs her from the ceiling as if she was a prop in the haunt.
After the title card, we are introduced to our new main characters. Natalie is home from school to see her best friend, Brooke, and Brooke's roommate Taylor. Brooke tells Natalie that her crush, Gavin, has gotten them all VIP passes to Hell Night. The girls go and meet up with with Gavin and two of his friends. They start having fun at Hell Fest, and we start to see a familiar masked figure following Nat around. Will she have the same fate as the girls before her? Or will she be able to out smart him at his own game?

Acting:
I have to be honest. With this rewatch, I noticed how stiff the acting really is. The worst performances from the leads have to be Roby Attal (Gavin) and Matt Mercuio (Asher). They just seem so incredibly phony. I usually am a fan of Bex Taylor-Klaus (Taylor), and I guess she does an okay job in this movie. I just can't stand her character. She's so ignorant and over the top. Of course, the stand out for this film is Tony Todd. He isn't on screen for long, but when he is, he stills the show.

Fear Factor:
I like the premise of this film, a lot. Mainly because I have always been afraid of this myself. What if you go into a haunted house, and a real killer is stalking you in the shadows? What if you get grabbed and all of your friends think it's part of the joke? That's pretty terrifying. How does Hell Fest do portraying that fear? Pretty well. You genuinely feel scared for Natalie as she notices this creepy person following her around all night.
I do wish they had chosen a different mask for this killer. It is just very plain. At the end of the film, we get to see other masks that this man has used in his past. I'm sad they didn't use one of those. I do like this killer. He isn't afraid of getting caught. He literally kills people in plain sight without hesitation. I could easily see there being more Hell Fest films with this antagonist.
This film has very minimal gore. There was one scene that made me squirm in my seat, because it was uncomfortable to watch. Other then that, they are mostly just stabbing kills or quit cut away. This film is rated R so I find that it's extremely tame for what they could have done with this rating.

Originality:
There isn't a whole lot that is original about this movie, sadly. A killer stalks a group of teens, killing them off one by one. This time is takes place in a haunted attraction park, but it's not even the first film to do that.

Overall:
I do enjoy this movie. It's a fun and easy watch on a cool October evening. You will definitly get Halloween vibes from it, and the production value is very nice. It doesn't look overly cheesy or have the worst acting. I think most horror fans will at least like this movie, or something about it. I wouldn't mind if we got a sequel to see more of this killer, because I like the mystery behind him. I would say that I recommend it!

Next week, I'm going to be reviewing The Houses October Built (2014). "Looking for a good fright for Halloween, five friends set off on a road trip to discover the scariest underground haunts. As their trip seems to have reached a dead-end, strange things start to happen and it becomes clear that the haunt has come to them." Check it out this week and join me next Tuesday for the review!

Another Great Review From TheMovieVlog! We have two Haunts to cover this weekend so keep it here at HH365, Where Every Day Is Haunt Season!