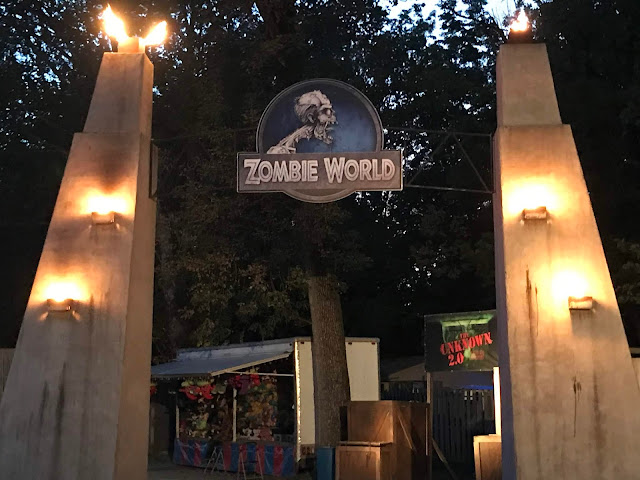 Welcome back to the next episode from HH365.com! Today we will have our second review of the season. Shocktoberfest. Located in Reading, PA. Shocktoberfest is a great Haunted Attraction with many things to do on top of the normal Haunts.

Shocktoberfest is comprised of a ton of different and unique events spanning from Hayrides to now even Massage Parlors with a hint of Horror. New for us this year was the scare zone set up like a Midway for a carnival filled to the brim with fog and actors ready to bring the fear as you had to make your way through other attractions. As you can tell, Shocktoberfest follows a "Lost World" motive through out its attractions and keeps the theme some what solid throughout. Let us begin!

As we arrived and got our tickets out of the way, we headed to The Unknown 2.0. Was a very good attraction the last time we had visited, so we were looking forward to seeing any major changes that have been done. We were told they were having technical difficulties and to visit the Hayride and Prison of the Dead since they were already open. No problem because Prison of the Dead was one of our favorite attractions the last time we were there.

We headed on over to the line for Prison of the Dead and we were glad to see they still use the prison bus to transport you to the Attraction. 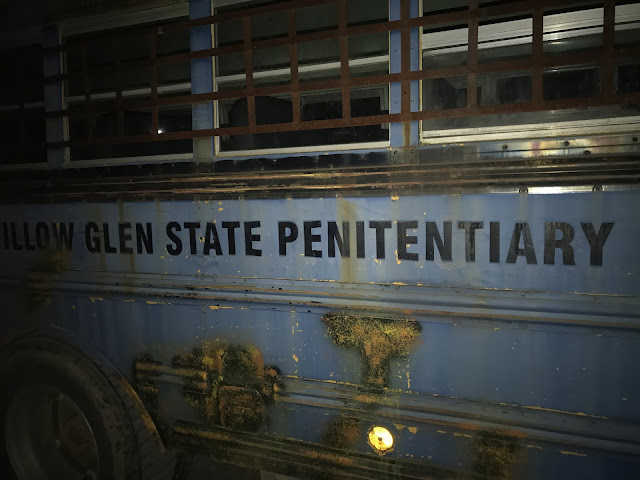 We are not sure if they were just having an off night because it was not very busy out there, but our line waited a good half hour to board this bus with only 18 people in line. Could have just been a slow start but it was an hour after Attractions were supposed to open. Anyway, we boarded the bus and got on our way to the Prison of the Dead. One aspect we were missing was the giant search light that you could used to see coming from the prison about two football fields away, it added an intimidating factor while you were sitting on the bus heading towards your sentencing. 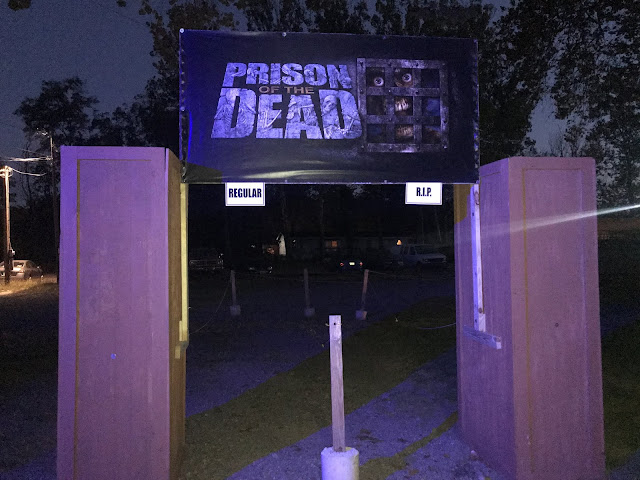 Prison of the Dead is easily the longest attraction we go through. It is an outstanding walk through as you are prisoners. starting from check in, to your cells and including your breakout. You bare witness to all aspects of trying to survive the zombie prison. This Attraction is always up for Attraction of the Year when we visit and this year was even better. Last visit had a lot of down time. They added a few more details and some more gifted actors to really get you to scream when you least expect it. Let us get to the scoring of Prison of the Dead.

Prison of the Dead is Hands Down a 5 Star or Bloodsplat Attraction.

As we walked back to the main area from the Prison, we headed over to the Hayride Line. Again we faced some very odd wait times for the amount of people in the park. It was a good half hour to forty five minute wait. As the wagon pulled up, we climbed the wood steps and got ready for the adventure. 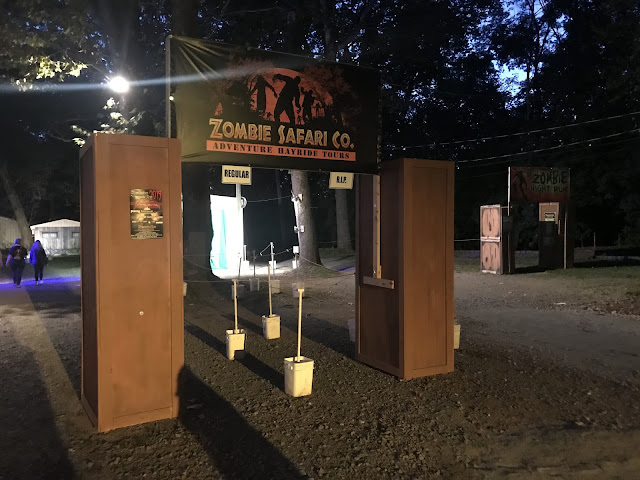 The Hayride begins with a film detailing what you are about to see and also a side mission that explains why the zombies are on the loose. Zombie Safari Adventure Hayride is well worth the money as it is one of the longest hayrides you will find in the area. Decently detailed scenes corresponding with the Zombie World theme and some others added that did not quite make sense. This was a good hayride but it left us wanting more. We all talked about it and could not really put a finger on what it was lacking but still a great time! Lets get to the scoring!

Overall, this was a good hayride but by no means great. Here is our voted Overall

After dismounting our wagon, we headed to grab a burger and a beer from the food stands set up in the park. The burger was good and the beer was nice as a lot of Haunts, you cannot buy a beer and relax. This was a nice change. We headed back through the fog filled midway. 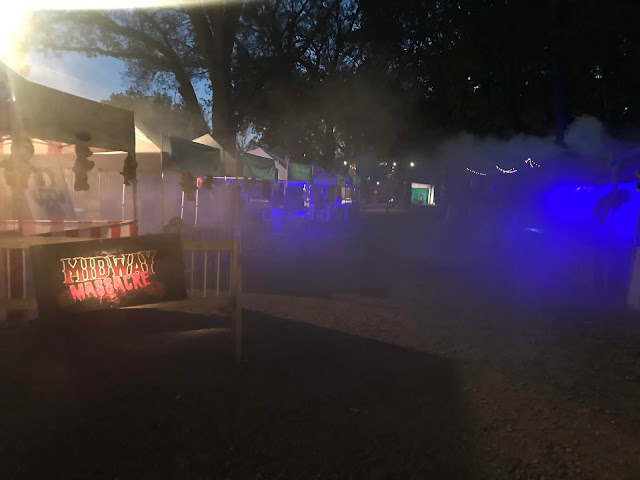 This was a cool design for a simple Scare Area. Great use of fog and lights kept the actors well hidden until the unsuspecting human could be attacked by the lurking Carnival Zombie. It was very reminiscent of HHN and the zones you can cross through even when it was time to relax and not sit in lines. We loved this addition. On to Ground Assault. 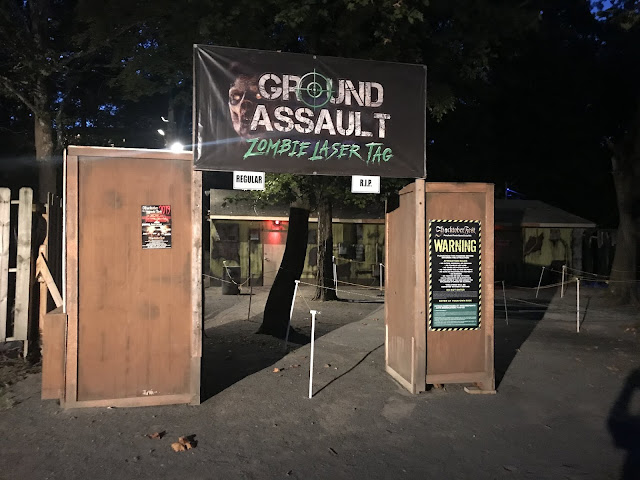 Ground Assault Zombie Laser Tag is kind of a different type of attraction. You are given a headpiece and a laser rifle and sent into a field with blockades to try and kill as many zombies as you can. We sucked very much at this as only two people in our five person group were the only ones to pull off kills. This was not much of an attraction but more of a game that we really enjoyed and through it was worth the price point. It did last a solid amount of time and you really got your workout in. It was a fun addition to the night but we will not be scoring as it was not a Haunted Attraction but will tell you to check it out because we had a lot of fun!

After running around and being shot by zombies. We headed over to the Unknown 2.0. 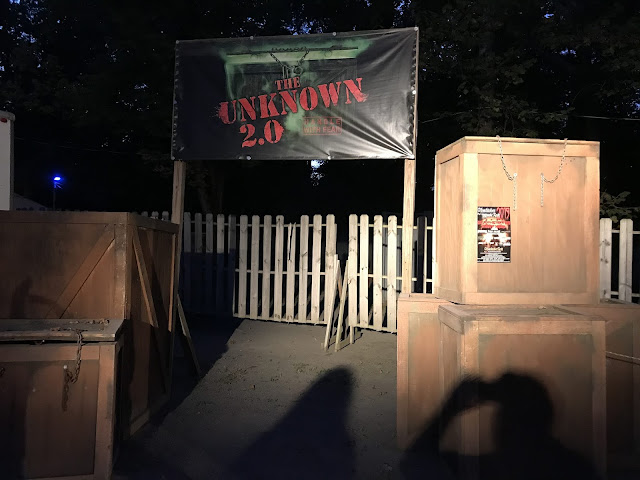 The Unknown 2.0 is a unique attraction that many have tried and most have failed at. This attraction is targeted at all of the fears that most people have. Clutter, Bees, Electricity and being run over. This attraction used to have a video explaining the point of the attraction as you were test subjects to see how you react to certain fears. This was not part of the attraction this time, whether it was from technical difficulties or they removed it all together. The issue with not having the video is that there are constant voices coming over top of you that you do not understand without the video. Let us get to the scoring of this really cool attraction. This Attraction caused a slew of screaming out of our team screamer so that was added points!

We enjoyed this attraction a lot and it was hard to deduct points because of the lack of video because the attraction was very scary. This is also in the running for Attraction of the Year!

Now it is time to look at Shocktoberfest as a whole. They are gifted Haunters that put a lot of work into their craft. We thank them for the hospitality because everyone was really nice and the food was great. This was a fun night out and worth the trip! Our overall score for Shocktoberfest 2019.

We voted to give Shocktoberfest a 4 bloodsplat for 2019. It is a great set up and a great park themed Haunt. There is plenty of other things to do there as well as Haunted Attractions. So if you are in that Halloween spirit, head on over, it is worth the trip and the amount of other attractions really can fill up your night. Thank you for reading. Keep it hear as we have a lot more reviews to do for the 2019 season! Next week will bring us to a brand new Haunt for us. Reapers Revenge. Until next time, This is HH365, Where Every Day Is Haunt Season.