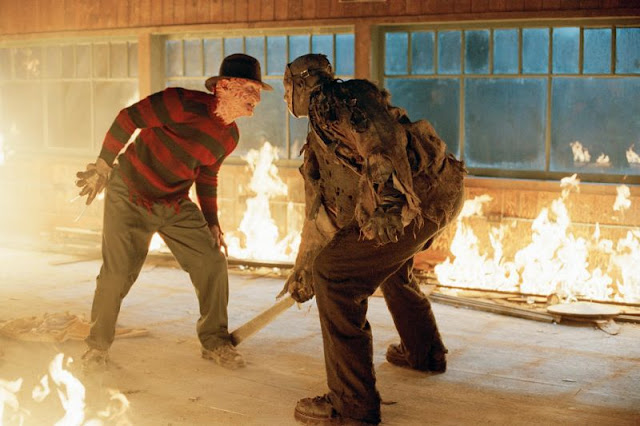 Welcome back to the next installment of HH365, Today we will continue our Movie Review segment, Tuesdays With TheMovieVlog. Lets go!

"Welcome to my world, bitch!"

Story:
"Freddy Krueger and Jason Voorhees return to terrorize the teenage population. Except this time, they're out to get each other, too."
This film opens with Freddy Krueger narrating about how the children of Elm street always gave him power. The fear they had of him gave him the strength to haunt them in their dreams, and in real life. Once everyone forgot about Freddy, he was powerless. So, Freddy searches Hell and finds Jason Voorhees. Freddy wakes Jason to start reeking havoc on Elm street once more so that the kids will remember him and be afraid again. Once Jason starts having all the fun, Freddy gets pissed off. This leads to one of the biggest show downs in horror history. Does it live up to the hype? Continue reading to find out!

Acting:
I really like most of the acting in this movie. Robert Englund shines as Freddy Krueger, which isn't a surprise. We will discuss Freddy more in the future when I cover the Nightmare franchise, but I like his performance so much in this installment. Ken Kirzinger was a good Jason. I didn't like him as much a few of the other men who have played Jason, but he definitely did a good job. I think Monica Keena (who plays final girl, Lori) was excellent. I just love when an actress can actually cry on screen and also prove to be a strong female character. She also totally beautiful, which doesn't have anything to do with her performance, but I needed to still point that out. I liked all of the actors in this installment, and was happy to see quite a few familiar faces.

Fear Factor:
Is Freddy vs Jason scary? No. Not to me. Let's start with a few positives though. Freddy was awesome. I loved how dark his make up was, along with all of the practical things done in this film. I loved the bed kill at the start of the movie (it's one of my favorites in the whole franchise). I thought the premise of this film was super interesting too.
Now, the negatives. They used entirely too much CGI. There are a few effects that are just pure garbage. Two scenes that stand out to me are the "I got your nose" scene and the Freddy worm scene. It's just totally awful effects. Also, it's super not scary when Freddy pinballs a cartoon Jason around the boiler room. They literally put in pinball machine sound effects. *insert eye rolling*
Let's talk about Jason for a minute. I didn't love his look. He almost looks like a Jason cosplayer at a horror convention. I know they wanted to hire Kirzinger instead of Hodder because they wanted a taller actor, but why couldn't they do make up like the beginning of Jason Goes To Hell. Jason looked gnarly and beefed up in that entry (when he is actually on screen) and I wish they would have used that look.
Compared to how awesome Freddy looked, Jason just didn't look the best in this entry.

Originality: Like I mentioned above, I loved the premise of this entry. I also love how it links back to Jason Goes to Hell (because Freddy says he found Jason in hell). Jason X could just be lifted right out of the series, and it wouldn't even matter. I think they successfully brought the two worlds together, and it works. I like how Freddy gets to play with Jason in the dream world, and then Jason gets to play with Freddy at Crystal Lake. It makes it seem like an even playing field.
I do have one little gripe with this story. Why is Jason suddenly afraid of water? He has never been afraid of it before. I think this was a weird decision for the writers to go with. It just doesn't make sense.

Overall:
I like Freddy vs Jason. Yes, I have a couple issues with it, but it's nothing that I can't look over. The film is just so fun, and it's great during a Nightmare or Friday marathon. If you're a fan of either series, I don't see how you can't enjoy this entry. It's a fangirl (or fanboy)'s dream come true.
Next week, we will take a look at the remake!

That wraps up our coverage of the Friday The 13th Collection. Wonder where we head next week as Haunt Season will be in Full Tilt! Cannot wait to bring you all the coverage here at HH365! Where Every Day Is Haunt Season!