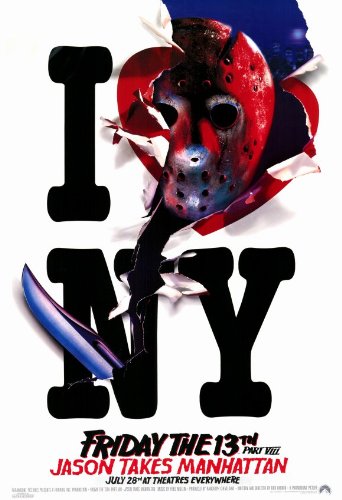 "You're all gonna die. You're the last ones. He's come back for you."

Story: "A boat full of graduating high school students headed to Manhattan accidentally pull Jason Voorhees along for the ride."
The film opens with a boy and girl making out on a boat. We hear over the radio station that the DJ dedicated the song playing to all of the Lakeview seniors that are graduating. The girl says, "Hey! That's us!" So now, the audience knows that they are graduates. The boy randomly tells his girlfriend that they are near the lake where "that young boy drowned". He then tells us the back story of Jason. As he is telling this story, the anchor on his boat hangs on a power line and lights up Jason like the fourth of July. The couple resumes making love as Jason comes back from the dead once more. He makes his way onto the ship, killing both of the love birds.
We cut to a girl (our new final girl, Rennie) boarding a cruise ship with a bunch of her class mates. The Lakeview seniors are taking a cruise from Crystal Lake to New York City for their graduation trip. We are introduced to a few of the new main cast members, including Mr. McCulloch. He is Rennie's uncle and also in charge of all the students on the cruise. We see Jason climb up the anchor and onto the ship. Before we know it, Jason is picking off the students one by one on their way to Manhattan.

Acting: I'll keep it short and sweet. The acting is just awful in this movie. All of the actors come off so incredibly cheesy, and it's very distracting. I like Kane Hodder as Jason, but even he isn't given enough to do here. He isn't nearly as threatening as the previous film, and comes off pretty stiff and boring. Jensen Daggett, who plays final girl Rennie Wickham, is just super stale. This makes Rennie one of the most forgettable final girls of the whole franchise.

Fear Factor: Jason Voorhees is just so dull in this entry. All of the kills are so generic and plain. He does a lot of slow stabbing and off screen kills. The only kill worth mentioning is one where the guy loses in a boxing match (you know the one). Also, what the hell is up with Rennie seeing little boy ghost Jason? It just doesn't make sense to the story or the series as a whole. Why would you see the ghost of someone who isn't truly dead? I know Jason is a zombie, but this whole plot point is just stupid.

Originality: Yeah, I'll point out the obvious. This is the first entry that doesn't take place at or near Crystal Lake. It barely takes place in Manhattan though! You are on the cruise ship for an hour and five minutes of the hour and forty minute run time. Other than location, this film is just a version of greater films that came before it.

Overall: So, picture this... What if they named this movie something different? Like... what if they called it, "Friday the 13th Part 8: Jason On A Boat", or something less stupid. Then! Then, they could have let the whole Manhattan ending be a surprise to the audience. That would have been a WAY better approach to this. I understand that the budget got in the way for the film makers, but I think this whole script and title needed a rewrite. I do not like this entry, and I always skip it during a marathon. Jason and all the other characters are so forgettable, and I can't say I recommend this one at all.
Next week, I'll see you guys in... Hell?

Another review from TheMovieVlog that I am having a hard time arguing with. She hit this installment right on the head. I however, never skip this entry because it has a campy entertainment value that reminds me of being little when watching it. No way means that it is close to a good movie.

That is all we have for you today, come back soon where every day is Haunt Season!