Movies VS Reality Part 3. The True Story That Brought on LeatherFace, Hannibal Lecter and Norman Bates 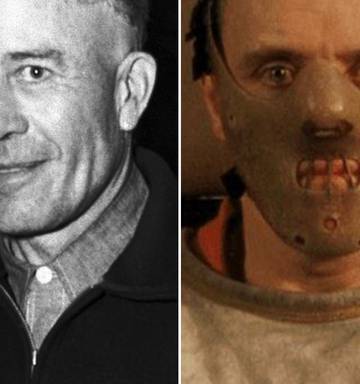 Welcome back to HH365! Today we will continue our Movies VS Reality segment from Halloween Haunts 365. Today we will take a look at Ed Gein. The Serial Killer that became the inspiration behind some of our Favorite Horror Movie Icons.

Edward Theodore Gein, "The Butcher of Plainfield" was born in Plainfield, Wisconsin on August 27th 1906. Ed was one of America's first Prolific Serial Killers. Ed Gein had some serious Mental issues and a ton of Mommy issues when he started committing his crimes. Before being arrested after police found a murder that Gein had no doubt committed, he held different odd jobs here and there and owned the farm that his family previously owned before he took over. Gein was reportedly well liked in the area. Some would consider him just a harmless odd ball going about his business. What people didn't know about ol Gein was that back at the family farm he had actually boarded up all of the rooms that his mother had used and kept them museum quality pristine. Gein had moved him self into a tiny room offset of the kitchen even though he had owned the entire house. This was about the time he started reading magazines about Cannibalism and Nazi Science performed at the Holocaust.

On the morning of November 16th 1957, Plainfield Hardware store owner Bernice Worden disappeared. A local resident reported that the Hardware store's truck had been driven out from behind the building at about 9:30 am. The hardware store was closed all day which had not been very suspicious as it was hunting season and Worden would often join in the festivities. At about 5:00 pm, Warden's Son, Deputy Sheriff Frank Worden entered the store to find that the cash register was open and that there were very noticeable blood stains on the floor. Frank Worden told investigators that Ed Gein has been in the store the night before his Mother went missing and that he would return the next morning to pick up some Anti-Freeze. A sales slip for a gallon of Anti-Freeze was the last receipt written by Bernice before her disappearance.

On the evening of the same day, Gein was arrested at the local grocery store. During his arrest, The Waushara County Sheriff's Department would search the Gein farm. This is when all of our movies became thoughts. A deputy from the Sheriff's department found Bernice Worden's decapitated body in a shed on the Gein property, hung upside down from her legs with a crossbar at her ankles and ropes at her wrists. The Torso was ripped open and "Dressed like a deer". She had been shot by a .22 caliber rifle and the mutations were done after her death. This, unfortunately for the world was not the only thing found at the Gein Farm.

The Sheriffs Department also found the following:
Whole Human bones and fragments.
A wastebasket made of human skin.
Human skin covering multiple chairs.
Skulls on his bedposts.
Female Skulls, some with the tops sawed off.
Bowls made from Human Skin
A Corset made from a human torso.
Leggings made from human leg skin.
Masks made from female human skins.
Mary Hogan's face mask in a paper bag.
Mary Hogan's head in a box.
Bernice Worden's entire head in a burlap sack.
Bernice Wordens's Heart in a plastic bag by the stove.
9 Vulvas in a box
A young girls dress and two vulvas from women under the age of 15.
A belt made from human female nipples.
Four noses.
A pair of lips on a window shade string.
A lampshade made from a human face
Fingernails from human female fingers.

The collecting of human skin to create clothing and masks directly connects to Leatherface from The Texas Chainsaw Massacre franchise. Also, brings us to Hannibal Lecter with the Cannibalism. Also from The Silence of the Lambs, Buffalo Bill. How he would dress up as women from body parts taken from his victims.

Now that brings us to the inspiration behind Norman Bates and the classic Psycho from Alfred Hitchcock. One of the darkest movies of its time and broke the mold on horror and what would be possible out of human beings. Ed Gein was trying to dress like his Mother with all of the woman parts taken from his victims. Also, the way Norman Bates kept his mothers body all of those years later was reflective of everything that Ed Gein had boarded up to protect.

Ed Gein in is Horrors inspired some younger film directors to stardom and set the Horror Genre on fire. Even after seeing all of the movies this disgusting person inspired, it is still very hard to understand what those police went through that day!

HH365! Where everyday is Halloween! Come back soon!

We used the amazing Wikipedia for most the research. Thank you!
Posted by Halloween Haunts 365 at 7:37 AM