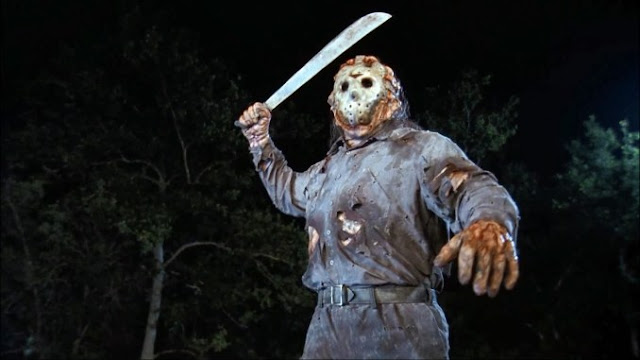 "My professional opinion: this guy's deader than shit. Hahahahaha. Um, strike that last comment from the record."

Story:
"After being blown away by a team of FBI agents, Jason Voorhees needs to find a way to overcome certain death. When his bloodied remains are sent to the morgue, his heart, still intact, is able to hypnotize a coroner and take over his body. After brutally dispatching a couple of FBI agents, he heads back to his favorite stomping grounds: Crystal Lake. Jason commences another teen massacre while a bounty hunter discovers the only way to kill him."
The movie opens with a girl driving to Crystal Lake all alone. She goes up to a cabin, and starts making herself at home. After quickly fixing a light bulb, she decides to take a shower. Jason's boobie senses must have tingled, because he comes out of no where to attack this girl. She takes off running through the woods into an open field. She tucks and rolls over some men hiding in the bushes. The men spring out and open fire on Jason. They shoot him about 100 times (confirmed later) and then decide to blow him up. (Why they didn't do this to begin with?) Jason is blown to pieces and we see his heart stop beating.
After the title card, a coroner (Phil) takes Jason's body into the morgue. Phil goes over all the damage that had been done to Jason's body. He examines Jason's heart next and it starts beating again. For some reason, he scoops it up and takes a big bite of it. This causes some yellow beams to go out of Jason's corpse to go into Phil's body, and also makes him roar like a lion. Shortly after this, Phil leaves the morgue on a killing spree.
Now we are introduced to Creighton Duke, a bounty hunter. For some reason (it's never explained) he knows about Jason's whole family history and his ability to body swap with anyone. Creighton goes to a small diner in "Jason's home town" where we are introduced to a waitress named Diana. Creighton says he needs to help to take down Jason once and for all, but he ends up getting put in jail. Not sure why he had to be arrested, but he was. Meanwhile, Jason's spirit is hopping around from body to body in search of something more permanent.
Eventually, we find out that Diana is Jason's sister. After she is killed, the only one that can defeat Jason is her daughter, Jessica. So will she defeat him, or will he take over her body and become himself once more?

Acting: Honestly, I didn't have a problem with the acting in this entry. The only actress that I couldn't stand was Kari Keegan, who played Jessica. She was just awful. The stand out for me was John D LeMay, who played Jessica's boyfriend, Steven. He carried the film. I can't really comment on Kane's performance on this one, because he is barely behind the mask.

Fear Factor: I do not find this movie scary at all, but something that I do love about it is the practical effects. The kills in this movie are the best part about it. Other then that, I find this film to be extremely cheesy. Not in a good way, either. I found myself rolling my eyes constantly and being annoyed by character choices.

Originality: This entry is 100% different than any other one in the series. In this case, is that a good thing? No. It's not. I'll start with the only positive note I have for this movie. This is the most story driven out of probably the whole series. There are a lot of characters and you get to know them pretty well. Now, the negative. This movie makes no sense. All of a sudden Jason Voorhee's has a sister? What? Where the hell has she been this whole time? It's just a dumb detail to put in the ninth movie in a franchise. Who is Creighton Duke and why does it feel like they should have given him more screen time? Whenever he came on screen, I was like, "Oh yeah. He's in this". The film just has so many issues. I get that they were trying to do something different, but it just didn't work.

Overall: Jason Goes To Hell is a horrible Friday the 13th film. Maybe if it had been a different supernatural slasher, it might be a cult classic by now. Who knows? All I know is that it doesn't work for a Friday film. I did love the kills very much, and the character development that we did get was good (excluding Creighton). Steven was a great final guy who really fought until the very end. The best part of this movie was the last shot of the film when Jason actually got taken to Hell, and we get a nice little cameo of someone we all love.
Next week, I'll see you in the future... and space?

That is our weekly chime in from our Movie Reviewer. I think i enjoyed this movie a little more then she did. I enjoyed the backstory because at least it added a little Myth to the Legend that is Jason Voorhees. Sure, it is a bit campy but at least they made an effort to try an explain this Maniac. Well! that is all we have for you today, come back tomorrow for more HH365.com! Where Everyday Is Haunt Season!
Posted by Halloween Haunts 365 at 6:32 AM