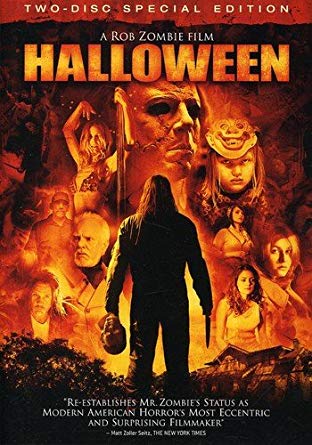 Welcome back everyone to the next installment of HH365! As you can see from the headline photo of one of the greatest horror movies ever made, we will take this post to talk about the entire Halloween Franchise.

Everyone knows about Michael Myers chasing Laurie Strode. Most people have seen most of the movies. But lets take a look and see how some of it really does not make any sense. The first movie is about Myers killing his sister after making love to her boyfriend and then coming back to his old house 15 years later, sees Laurie and follows and attacks her and her friends later that night on Halloween while being followed by his old shrink Dr. Loomis. OK, awesome. The second movie takes place right after the first movie with the same cast and same idea, only that they add that Laurie is actually Michael Myers' Sister. How did he find her? How did he know about her? We shall continue because it gets weirder

The third movie leaves the Michael Myers story completely. This is one of the reasons that I own it, but still haven't watched it. No interest.

The fourth movie has Michael chasing down his niece. Laurie's niece that was adopted after her mother and father died in a car crash. So Michael again escapes a mental institution to go after another family member that he has never seen or heard of until he is in the ambulance being transported. The niece wins the battle as the police show up and shoot Michael to hell. Jamie Lloyd then touches her uncles hand and soon afterwards tries to kill her adopted mother.

The fifth installment has Jamie in a children's clinic who cant speak. So Michael, with the help of a guy that lives on some creek and nurses him back to health is now linked to his niece on a telepathic level. Michael then again goes after his Niece and again like always, the incredible Dr. Loomis. '

The sixth installment brings back a name from the past in Tommy Doyle. Tommy was the little boy that Laurie was babysitting in the first movie and set up shop next door to the old Myers' house because he knows he will be back. Well, Jamie is finally captured by Thorn, or Michael. Kind of the same thing now as we find out that in the Pagan days, Thorn was a curse on the family where one member needed to kill innocence to keep the crops growing or something. Jamie is also pregnant at the time of capture. Not sure how according to our math , a 13 year old girl now looks 29 and pregnant but we will carry on. Michael kills his niece but now is tracking Jamie's baby that Tommy now has picked up from a bus station locker room because he was lucky enough to be listening to the radio as this was going on. Tommy Doyle with the help of some of the strode family finally take down Michael with the help of Dr. Loomis, who else? This was actually Donald Pleasence's last film as he died during production. The movie ends with Dr. Loomis going back into the sanitarium and lets out a giant scream as Tommy and the gang drive off. So a movie killed off a character that was played by an actor that died. Good thinking, unlike Star Wars. Hmmmm. Continuing!

The seventh installment now brings us back to Jamie Lee Curtis as Laurie Strode or Keri Tate because she faked her death 20 years earlier to escape Michael. Not sure if  H20 acknowledged the existence of her daughter Jamie but we will carry on because now she has s son John Tate and is running a fancy school in California. Michael finds the nurse from the original Halloween and loots and pillages her house and some kids that live on the block until he finds the Laurie Strode folder. Then Michael makes his way to California and kills everyone but Mother and son. Laurie ends up decapitating Myers, or does she?

The eighth movie ends the Laurie strode story for now. Michael hunts down Laurie in a mental hospital after the dismembered the wrong man thinking she had killed Michael. Michael then eliminates Laurie within the first ten minutes of the movie and heads to his old house to kill a bunch of annoying kids shooting some web investigative show. Then karate fights Busta Rhymes and died in a fire in the end.

Rob Zombie created his own Michael Myers story line and it was far better, even though I am still really on the fence with the Zombie sequel. It still follows the plot and doesn't make up family members along the way.

Now, Forget everything that has happened since The Original Halloween. Because Halloween 2018 is going to take a shit on it. Fast forward 40 years from the initial babysitter attacks. Michael was locked up for 40 years and then comes after Laurie but she is ready for him. So now we are making sequels that cancel out all of the other sequels? Even the sequel that John Carpenter helped create? Why do we have to ruin everything? This timeline was not confusing enough, now you make a movie that you have to advertise that the existing sequels do not matter. What in the hell is going on? Friday the 13th maybe super campy but at least it follows a generic timeline. I am not sure what happened to Halloween. But it is all over the place. We literally just finished them all and I still had to think about about this messed up timeline and family members.

Then we continue this with two more sequels coming to Halloween 2018, even after stating that they hate sequels and wanted a fresh start? Great job Hollywood!

That is all we have for you today at HH365.com Where Every Day Is Haunt Season!