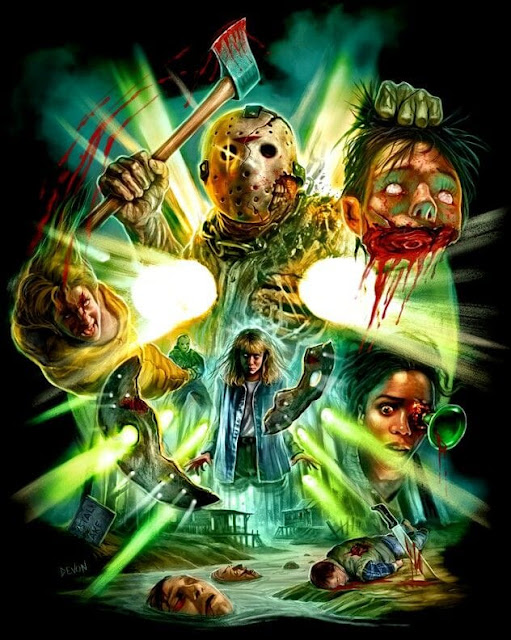 Welcome back everyone! Today we will continue our Tuesday's With TheMovieVlog Segment and Her reviews of the Friday the 13th Franchise. Lets get to it!

"Hey, Tina. This how they wear their jackets back at the mental hospital?"

Story: "Years after Tommy Jarvis chained him underwater at Camp Crystal Lake, the dormant Jason Voorhees is accidentally released from his prison by a telekinetic teenager. Now, only she can stop him."
This movie opens with a quick recap of the last film, showing us that Jason is still chained to the bottom of Crystal Lake. After this, we see a young Tina Shepard over hearing her mother and father argue. When she hears him hit her mother, she takes off for the lake. Her parents quickly follow her out of their cabin as she climbs into a small boat and floats out into the water. Her father pleas for her to return to shore, but she wishes he was dead. The dock that he is standing on collapses, and he dies.
We time jump ten years into the future, and see that Tina is now a teenager. Tina, her mother and her doctor have returned to the house on Crystal Lake so that Tina can begin her "healing". During a session with the doctor, we quickly learn that Tina is telekinetic. It is because of her powers that Jason is resurrected and broken free from his chains on the bottom of the lake.
Tina knows that she saw a man come from the lake, but her mother and doctor do not believe her. They just think she is having delusions. Nick, the neighbor boy, comes over to Tina's house and invites her to a party he is throwing with his friends. It doesn't take long for Jason to start up a killing spree once more.

Acting: I go back and forth with the acting in this one. I think Kane Hodder is an excellent choice for Jason Voorhees (and it makes sense why he is Jason in the next 3 films after this one). Kane was meant for this role, and it's probably why he is usually the fan favorite. I also really love Lar Park Lincoln. I've always thought that she acted her pants off as Tina. She has to cry through the majority of this film. I try not to be biased though, because I have had the chance to hang out with Lar (during a film festival in my home state), and she was an absolute doll. I loved her long before I met her, but it definitely makes me love Tina even more.
Other than Kane and Lar, the rest are just... meh. The supporting cast are just bottom of the barrel actors that just aren't that convincing.

Fear Factor: The New Blood wastes zero time getting to the kills. There are a ton of kills in this installment, and they're all pretty awesome. I wish we could get a release with the footage that the MPAA made them cut from the kill scenes in this movie, because they cut out quite a bit of gore. I think Kane is an amazing Jason. By now, you all know that Richard Brooker and CJ Graham are my two favorite Jason's, but there is no denying that Kane is an unstoppable force behind the hockey mask. He is probably one of the most creative Jason's to date. He uses literally anything that he can get his hands on to kill with. I have to also mention Jason's make up in this film. Holy shit, it's my favorite Jason look out of the whole entire series. I love that he is really decaying, and just gross. I love his backbone sticking out, even through his clothes. Whoever came up with this design needs an extra pat on the back. Job well done.

Originality: Although we have seen characters in this series that have come from mental institutions, we have never had a character like Tina in this series. I adore that they made Tina telekinetic. It puts her on more of an even playing field with Jason, and makes for an even more exciting show down. The third act in this installment doesn't disappoint.

Overall: I think this film is way better than the seventh installment in a horror franchise has any right to be. It's exciting, it's different, and our final girl puts up one hell of an exhausting fight. This sequel has always been one of my favorites in the series, and it's not given enough love in the horror community.
Next week, I'll see you all in Manhattan!

Great job again from TheMovieVlog. I will have to disagree with the overall as I believe the story to be around a 3 bloodsplat and Fear factor coming in around a 3 blood splat as well. Making this movie around a 3 Overall for me. But with that being said, she has reviewed a hell of a lot more movies then I have. Very interested to see what comes when Jason Takes Manhattan.  Until next time everyone, Keep it here for everything Scary!
Posted by Halloween Haunts 365 at 8:26 AM