Whats Next For Haunted Attractions... 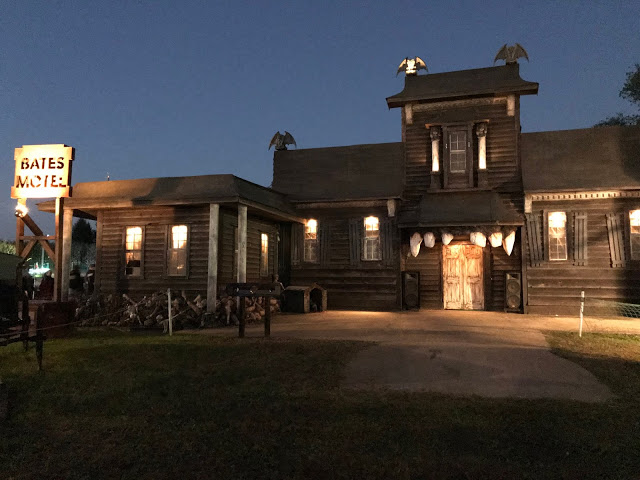 Welcome back everyone! Hope your enjoying your day. Today we will take a look into whats next for our favorite Halloween past time, Haunts. And really where we see the industry moving, good and bad.

We have all seen the new digital effects in some our favorite haunts. You see pictures on the wall and you see a guy wielding a chainsaw that is getting closer to you. Before you know it you see the chainsaw come through the "door" and you get splashed with a little spray of water to make it feel like you were just sprayed in a poor victims blood. We see these everywhere and they are pretty cool for opening "holding" rooms but for use in the actual walk through I can say I am not a fan. The real fear comes from actual Haunt Actors. Scares come from great timed hidden animatronics. Shit, one of the biggest jumps I have had was when half a car came after me in an inside walk through. Came right for my ankles and damn right I leaped out of the way. This is what makes Haunt effective.

Another fad, I really hope is a fad is Virtual Reality. Right now, they are mainly used as side attractions but every 10 years VR always tries to make a come back. Virtual Reality will never look right for me. It didn't in the 80's It didn't in the 90's or now. It always looks like a crumby video game. This is not what I want for my hard earned money. I want fog in my lungs, the fear of something behind me, skilled actors at every turn and awesome special effects through out.

How do you Virtual Reality a Hayride? The chill in the air? The explosions that you feel the heat off of. No, I really hope that VR stays in the video game sector and they ruin whatever they try. VR has never been fun and it will continue to just always be a gimmick.

We need more Haunts to make it a great night out. There are many Haunts we get to spend the night out at. There are quite a few that need more of an experience. There are some amazing Haunts that we drive hours for but your really done in 20 minutes and that is it. More food, games, hell some have rides. A lot of Attractions are missing the boat with this. This is added income. Make it a night out and people will return over and over again.

We love our Haunts. I want them to stay how they are. The advancements in animatronics has really taken off in the past couple years. From skyscraper skeletons that breathe fire to anything you can imagine. Animatronics haven't looked as good as they do now. Keep up the great work Engineers and we look forward to see what you have in store for us this year!

One of the greatest advancements is the electrical controllers. You can control and program an entire scene to work flawlessly. This, in my belief has been the strongest addition to our Haunts ever. Billions of possible commands so you can even keep the show more lively and alot easier to change effects.

Just a couple thoughts I've had while sitting on a ton of airplanes. Until Tomorrow! Keep it here! at HH365.com!
Posted by Halloween Haunts 365 at 9:32 PM