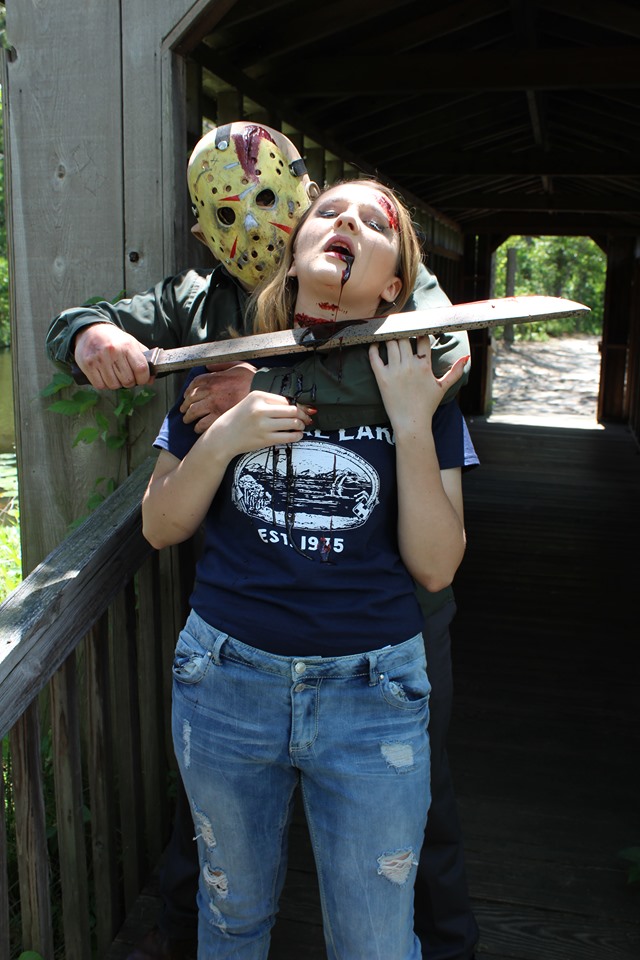 Welcome back everyone. Today we are going to introduce our new friend of HH365, Brian. As you can see in the picture above he cosplays as Jason Voorhees. He also runs southjerseyjason.com. Click the link and check it out! We will also have a spot over to the right so you can always get to his site. Lets get to our interview with Brian and dive right in to the world of Cosplay.


What got you into cosplaying?
I started attending horror conventions in 2012.  I was amazed at all of the cosplayers and how detailed their costumes were.  A year after my wife and I moved into our house, I started dressing up for Halloween to hand out candy.  I would stand at the corner of our street in costume and I would get the cars honking at me.  The cars would than turn around and follow me to my house and we would take pictures with them or their kids.  After the first year, I would get repeat trick or treater’s and adults coming to my home to take pictures with me.  My first time participating in an event was in October of 2017.  My friends Penelope, Justin and Frank own Farpoint Toys and Collectibles in Mays Landing, NJ.  They partake in the annual Halloween Parade and asked me to be a part of their group.  The kids in the crowd love my costume especially when I would remove the hockey mask to reveal Jason’s face.  The younger kids have no fear; it’s the teenagers that get scared and one actually took off like a bat out of hell when I creeped up on him.  I continue to participate in the Mays Landing Halloween Parade with Farpoint.  The other event I was a part of was Halloween Comic Fest at the Hamilton Mall.  My friends Sean and Gregg own Level Up Entertainment and my friend Scott who is the manager asked me if I would be a guest judge in their costume contest.  That was when I created the South Jersey Jason Facebook page to promote the event.

Why Jason Voorhees?
Horror is my favorite movie genre and when I was younger I would go camping often.  In the woods at night, it would get silent and you often would wonder is there someone lurking in the woods?  When I was a counselor at a Boy Scout camp, I would use my horror knowledge to create stories during the campfires than pull pranks on the campers.  Friday the 13th is my favorite of the franchises as the original was filmed 3 hours away from me n Blairstown, NJ.  So the fact that the franchise has a Jersey connection is awesome.  Jason always intrigued me as he has a back story of drowning when he was a boy and the original movie was never intended to spawn sequels.  What I like about his character is that you do not know anything about him growing up, how did he survive all these years without being noticed?  What did he do all that time from 1957-1985?  Out of the franchise, Part 1-4 are my favorite as he is “human”.  It was not until part 6 they made him supernatural.  Of the supernatural Jason, my favorite is part 6 but I love the look of him in part 7.  I just purchased a great new part 7 costume from J3 Jason Costumes.  I plan on wearing it at NJ Horror Con in Atlantic City, NJ in October.

Best part of Cosplaying?
I remember watching an interview Gary Busey did for the 40th anniversary of Buddy Holly’s death.  He was discussing the Buddy Holly movie that he starred in.  He stated that when he put the glasses on, he felt like Buddy Holly.  That is how I feel when I put on the hockey mask.  When I dress up, it’s an escape from reality and I enjoy scaring people, meeting fans of the franchise and taking pictures with them.

How long have you been dressing up as Jason?
I have been dressing up as Jason since 2017.  I started coming up with ideas for which incarnation I wanted to be as there are so many.  As you recall, my favorite movies are 1-4 and in 2-4 he displayed human characteristics and was scary as hell.  So I decided to go for the part 4 look as that is my favorite portrayal of him during the early movies.  I purchased the pants and shirt from Goodwill.  The undermaask came from Dark Side Studios and I purchased the hockey mask from Monsters for Hire.  I recently just purchased a part 7 costume from J3 Jason Costumes.  James Ingram did a great job with completing the compression suit with the exposed bones on the legs, back and arms/hands.  He also weathered the shirt and pants and put together the broken chain necklace.  He ordered me a blank hood in which he painted to match the exposed bones on the compression suit.  During the whole progress he kept me updated with pictures of his progression. James Ingram was recently spotlighted on Return to Camp Blood podcast.  If you are a fan of the franchise or want to hear more about what he makes, give it a listen.   I ordered the part 7 hockey mask from James Rand.
Where do you want cosplay to take you?
I am hoping just to get my name out there and get more page likes on my Facebook page and views on my website SouthJerseyJason.com.  I would also like to be booked for events, whether it’s at a con or a Halloween Attraction.  As I had stated, I enjoy interacting with fans of the franchise.  I recently started a collaboration with the Blairstown Museum.  Jeanette Iuratto is the curator of the museum.  I interviewed her back in May and one of the topics was an event that is coming up in September.  She has a killer lineup scheduled 9/12/19-9/14/19.  On Friday September 13th, she is opening a Friday the 13th Museum.  She currently has a small exhibit in her current museum but wanted to offer a bigger and better experience to the fans who make the trek to town.  I will appearing that Friday in costume taking pictures with fans.  I will also be selling 8x10 prints of me in costume for $13.  For every print that I sell, I will make a donation to the Blairstown Museum.  She also has another event planned in December in which I will also be a part of.  It’s still in the planning stages so I cannot discuss that just yet.  For more information about the Blairstown Museum and the Friday the 13th Museum, check out The Blairstown Museum on Facebook and BlairstownMuseum.com

Have you thought about  doing any other  characters?
Actually I have.  I have 2 versions of a Michael Myers costume-the 1978 and 2018 style. Before I got the Jason costume, I dressed as ’78 Myers for Halloween. When the new Halloween movie came out, I dressed as 2018 Myers from Halloween and dressed up as the character for the 2018 Mays Landing Halloween Parade.  You can only do so much with the Michael Myers look as it is very basic.  With Jason, there have been 12 movies each having a different look.  I like seeing other cosplayers taking their own twist on things.

What are your goals for the website?
When I interact with other businesses, I put a link on my site to promote their website.  I want to continue to help promote the independent retailers, the mom and pop stores, other pop culture or horror related websites etc.  I write blogs from my first experience watching the movie, my tour at Camp Crystal Lake and my favorite kills from each movie.

Do you enjoy going to Haunted Attractions?
I do.  I started going to Field of Screams at Creamy Acres in Mullica Hill back in 2009.  I pretty much attend that every year.  I have yet to try Bates Motel, Jason’s Wood’s or Eastern State Penitentiary.   I have toured ESP during the day and  if you love history, it’s a great tour.  My wife surprised me with a vacation to Orlando this upcoming October for my 40th birthday.  I am finally going to get to cros off one of the things on my bucket list.  She booked the trip so we can attend Universals Halloween Horror Nights.  I did attend Paranormal Cirque last October.  Its Cirque Du Soeil meets horror.  The whole show was fantastiifantastic.  From the tent, to the performers entertaining the crowd before the show, the show itself and then meeting the performers after.  Check them out at https://www.paranormalcirque.com/

What is your favorite Haunted Attraction?
Since I haven’t been to any other it is Creamy Acres.  Even though they change the line up every so many years, I kind of gotten used to the scares.  I would like to attend an attraction that makes my heart race.

If you could add something to Halloween Haunts 365.com, what would it be?
From what you have posted so far, you have pretty much targeted my interest, from the attractions you have visited, movie reviews and the story behind the movie (Amityville).  If one day you can add adventures to abandoned prisons/institutes or the roads less traveled.  Personally for me, since I enjoy the horror franchise, it would be reviews of horror movies or documentaries.