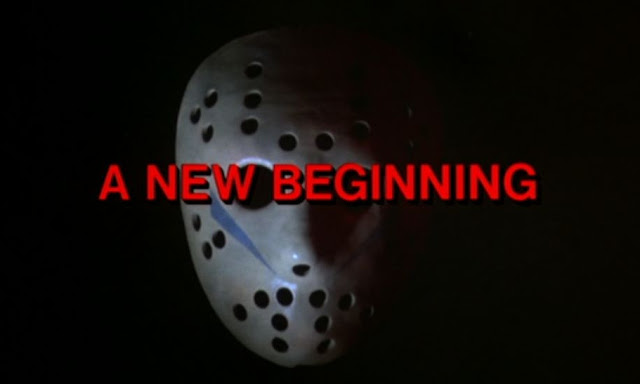 "Jason Voorhees? You're outta your fucking mind. You've been out in the sun too long. Jason Voorhees is dead!"

Story: "Still haunted by his past, Tommy Jarvis - who, as a child, killed Jason Voorhees - wonders if the serial killer is connected to a series of brutal murders occurring in and around the secluded halfway house where he now lives."
The film opens with little Tommy Jarvis (played once again by Corey Feldman) walking through the woods until he comes to a grave. The grave marker reads, "Jason Voorhees". Tommy catches two men trying to dig up Jason's body. Once they pry open the casket, Jason arises and immediately kills the two men. Tommy is frozen in fear as Jason walks over to him, raises his machete, and then... we cut to a grown man waking up from a horrible nightmare. Soon, we learn that this is our grown up  Tommy.
Tommy is getting taken to a new half way home called Pinehurst. There are several other residents at Pinehurst who are all pretty close to Tommy's age. Pam is introduced here. She is the assistant director of Pinehurst, and our new final girl. Almost immediately, another resident named Joey is axed to death right on the front lawn by one of his housemates.
Shortly after Joey is murdered, other locals start getting picked off one by one again. Jason's dead though... or is he?

Acting: The acting in this entry is pretty mediocre. I've definitely seen worse, but honestly, these performances are nothing to write home about. Even this version of Tommy Jarvis, played by John Shepherd, is my least favorite of the three actors who play that character. He is just so boring and brings nothing new to the character. Even Melanie McKinnaman (Pam) is a super forgettable final girl.

Fear Factor: This is the first Friday the 13th film to come off pretty silly, in my opinion. It isn't played straight horror like the first four films. Jason isn't as fierce or menacing anymore. I will give credit where it is due though. The kills are solid, done with pretty great practical effects. Other then that, I do not find this one to be scary at all.

Originality: I see a lot of similarities between this film and the original. It is a "who done it" type horror film, since we do not know if Jason is back from the grave or not. They don't show the killer until the 3rd act, just like the first film. They try to give this movie a plot twist and big reveal, but honestly, it's so stupid. I hate the reveal of the killer in this one. It makes this movie have plot holes so big that you could drive a truck through them. Besides the story taking place in a half way home, there really is nothing new here.

Overall: So, I won't lie. I'm not a big fan of this entry. This was actually the first time I've seen it in years, because I usually skip it during a marathon. The plot holes are almost too much to handle. I will admit I had fun with this viewing. My husband found it to have many funny moments, and so did I. I like the crazy characters like Ethel and Junior, the comical Demon and his girlfriend, and (of course) Reggie the Reckless. Regardless, this isn't a sequel that I ever crave to watch like the films before it. I'm just glad that they dismiss the end of this one for the next film.

I have to fully agree with her on this entry. Reggie The Reckless was awesome but not even close to save this shithole. I really don't know what in the hell they were thinking with this one. Great job again for Tuesdays With TheMovieInsta!