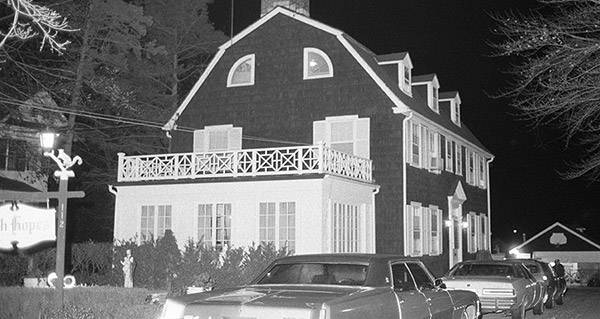 Welcome back everyone! Tonight we will take a look at really happened the night that sent the pictured house into fame! This Iconic picture is not our property but we love it so we used it!

Everyone pretty much knows the Story. In November of 1974, Ronald Defeo woke up around 3:15 am and decided to kill his entire family in their house at 112 Ocean ave Amityville NY. Defeo killed 6 members of his family with .35 caliber Rifle. All lay dead in their bed. Killed violently in their sleep. Maybe in an attempt to get out of the hardest charges, Defeo pleaded that the Spirits that Haunted the house at 112 Ocean ave have been bothering him for months and finally were his reason for committing the Mass Murder.

Now lets take a quick look into one creepy fact. You can do your research and see some conflicting stories on whether or not the youngest sibling was found in her bed or in the closet. Either way, A .35 caliber rifle blasts in the night and no one wakes up?  Boom, Boom, Boom and not one soul wakes up after even hearing the first one? This has bothered me for years. Every body found as if they were sound asleep when the bullets ripped through their flesh. How?

Did Ronnie Defeo actually act alone? Most people do not believe that he had any help. As there are some reports of neighbors hearing separate gunshots but I do not have any idea how far neighbors are as I have not been to this site yet. From the pictures, it looks like there is a neighbor pretty close to the left in that white house. Now sadly, 6 members of the family are dead.

The following year in December, The Lutz family moved into this location in Amityville. The family is said to have experienced some of the same things that Ronnie Defeo dealt with including waking up at 3:15. Feeling cold all the time and growing increasingly irritable towards his Wife and kids.
There is not a ton of proof that anything like this happened to the Lutz family. Ed and Lorraine Warren did visit the house after the Lutz family moved out leaving all of their possessions behind. Lorraine did notice a Very Dark presence in the house that actually stayed with her for a very long time. But, in the same hand. There are many articles linking Ed and Lorraine Warren to the Lutz family writer for the book. Whether they were helping out or taking money for a story is really up in the air.

Many families have moved in and out of the 112 Ocean ave Building. Not one has complained about the house or any spirits.

The house is back on the market again. I can not find out how many times it was sold at the moment but why would people keep leaving a lake side house in Long Island?

Growing up in a bad area, I know what gunshots sound like and they wake you up even blocks away. So, in my opinion. There is something in the Amityville House. There is no way you can stay asleep with a Rifle firing shot after shot. I don't know if it is everything George Lutz and Ronnie Defeo say there is, but something very very strange happened there that night. Believe what you will about the aftermath but the night Ronnie Defeo killed his entire family. There is no way you find all 6 bodies laying in their bed. It really bothers me that this did not bother any police officers at the time too.

Well! Make out what you will about this crazy night. Spiritual? Possession? Accomplices? You be the Judge and feel free to reach out and tell us what you personally think.