A Tragedy Occurred That Almost Ended It All. Lets Talk About The Six Flags Fire. 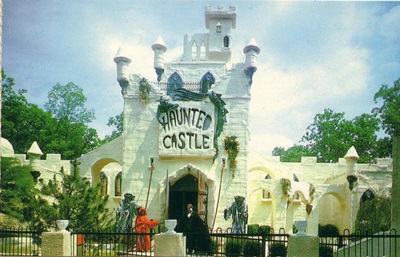 Today we will take a dive into one of the darker moments in Haunt History and one that happened in my home state. Picture courtesy of Wikipedia.com. Not mine.

Haunted Castle was a Haunted Attraction at the very popular Six Flags Great Adventure here in New Jersey built in 1979 as a test project for Great Adventure that really became one of their most popular venues in the park at that time. Little did Six Flags or the world know that their little Haunted House would become the outline for modern Haunt Fire Safety and Safety overall.

In 1979, Haunted Attractions were not what they were today. There were no defining safety measures to take. It was really a new concept. And we really learned the lesson in a hard way. We know that owners have a hard time with fire codes and safety codes and one of the biggest reasons it has become very difficult to start a new Attraction or even take over an existing one, but after you read what happened at this site, you will fully understand why.

On May 11, 1984, a fire began in the attraction, fanned by the buildings AC unit it spread rapidly due to the use of 1984 Haunt products that were highly flammable. At the time of the fire there was about 29 guests in the attraction. Fourteen people including guests and four actors managed to escape the blaze. Unfortunately, the story does not end there. A group of nine teenagers entered the attraction as a group. And only one made it out alive. The park and the world lost eight kids in this horrible accident. The lone survivor of the group was carried out by a park employee.

As interviews started, one guest inside the attraction stated that she saw flames coming from around the hunchback display, at first thinking the flames were part of the attraction was part of the shoe until their lungs filled with smoke and they went running for the exit. An exit that was too far and few. We lost 8 kids in this fire, my biggest peeve with this incident is that Six Flags really did everything to hide that it happened. 8 souls gone and there is not even a plaque or a flower or names anywhere in the park. This is classless. You could at least remember the names of the kids lost. Tasteless.

There really is still a ton of debate on how the fire actually started. also debates on whether or not there was emergency doors chained shut to stop the staff from smoking outside of the venue. there is not a lot of proof for any case today and were really not covering this for causes or the debate on causes. Either way it happened and we lost people.

This was a huge tragedy and taught the fire inspectors that Haunted Attractions needed to step their game up. Many attractions were closed due to this fire and the upcoming safety laws put into place. This event really could have ended the Haunt Industry overnight with the costly repairs and upgrades needed to every attraction. It is also the reason not everyone can go right out and start their own attraction.

The next time you are in a Haunted Attraction and notice that every so many feet there is an emergency exit, remember why. When you see all the rules listed for every attraction, read and follow them. It could mean your life or others.

Sorry for the dark post today, but the info is needed. Not sure what we will cover tomorrow but make sure you come back as I am sure it will be spooky.
Posted by Halloween Haunts 365 at 8:32 AM