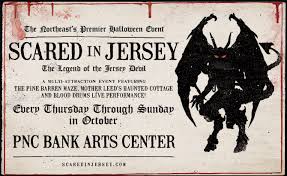 Tonight’s stop on our 2017 Haunt Tour brings the team up the Garden State Parkway to Central New Jersey and the Scared in Jersey Haunted Attraction. Located at the PNC Arts Center right off the parkway, Scared in Jersey is a first year Haunted Attraction based on the very old tale of Mrs. Leeds and the 13th child she gave birth to. That’s correct, The Infamous Jersey Devil.

Growing up so close to where the Jersey Devil was born in South Jersey, this story is one I have followed for a long time. So, to finally see a Haunted Attraction open based on the 300-year-old story, I was ecstatic. We could not find a contact fast enough. Thanks to some great people we were on our way up north.

When you arrive to the Haunt, there are a couple vendors set up and some people hanging out in this type of courtyard right before the Attractions start. Some food and drinks. We looked around and headed into the line for the Attraction.

After the line you head to a giant stage setup. The lights go dark and a very loud and piercing voice comes down from the top right of the huge stage. The actor started to warn you about the harms of heading into the pine barrens and started telling the story of the birth of the Jersey Devil. After his act, actors took the stage and you got to see the birth of the ageless icon. With great use of effects and sound it really came to life and we really enjoyed the opening act.

The rest of this Walk-Through Attraction was another story.

First Attraction up was The Pine Barren Maze

After about 3 to 4 mins after entering the first attraction we started to notice that there wasn’t a whole lot to this attraction. The scenes were set up with the odd corners for the scares to begin but they never came. Not one actor even attempted to jump out at us the entire time throughout the entire first attraction. The Haunt was set up like a first year Haunt is expected to look plus some but there were no scares. There were setups for the jump scares but no actors. This was a massive disappointment. The one actor that completely missed his mark was a random clown character. What is he doing in the Pine Barrens or what does he have to do with the Jersey Devil?  We have been in Home Haunts that had more jump scares. We really could not understand what was going on.

Here is the Scoring for The Pine Barren Maze

Next Attraction was Old Mother Leeds Cottage.  We are hoping this was just a very very off night for this New Attraction but just like The Pine Barrens maze, It was much of the same. The first miss was that you were not sure when the next attraction started because you just kept walking.  Good setups for jump scares that had nothing behind the hidden walk ways. The one part we enjoyed was the Leeds Family cemetery. This was a well-designed scene.  But right after that scene, we watched an actor lay on the floor. Perfect, here we go. She is going to jump up and scare the beginning of the group or the middle or come up behind. NOPE! She just laid there. We stopped and watched the group go by and then she jumps or gets up. No one was there, she missed the entire group. What was the point?

Here is the scoring for Old Mother Leeds Cabin.

We cannot exactly be sure of what happened. But this night did not go well. This is really the only time it really sucks to be a Haunt Review team. Scared in Jersey has a long way to go. This is our Overall Score for Scared in Jersey.

We want to thank our contacts at this brand new Haunted Attraction, we love meeting new people in the Industry every year. If you are interested in using consultants for next year’s show, feel free to reach out to us. We can get the scares moving for you.

All pictures seen above are property of Scared in Jersey. We won’t take photo credit.

Well we still have a whole season in front of us! Currently writing 2 more reviews after this one. They will be posted in order of visit. So, look forward to seeing our Frightland and Bloodshed Farms review.

Until Next time! Keep it here for All your Haunt needs and questions.
Posted by Halloween Haunts 365 at 7:41 PM