TERROR BEHIND THE WALLS REVIEW!!!!!!

Time for our second review of the season. Man time really is flying by now. October, the best month of the year is upon us. Halloween decorations are going up, all the haunts are starting up and firing away every weekend, some all week long. We have three consecutive haunts for this weekend. We could not be more excited. Every work day is taking forever because you know what the night will bring at the Haunted Attractions. Every Hour is taking days until you pull up into the big windy parking lot or hop on a school bus that takes you to the giant historic ruins of a prison in Philadelphia. 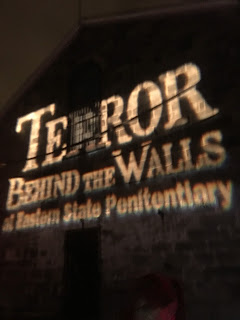 And that is where the latest journey has taken us. Deep into the old cell blocks, down the battered hallways and walking through the exercise yard that Al Capone himself walked down. Just like Al Capone, when visiting Eastern State Penitentiary brings a somber tone. Walking through the main entrance like the hundreds that never got to leave those walls, really puts a perspective in your head on this not just being a Haunted Attraction but a real walk through history. Legend has it that this prison is really haunted. To the point that our government has deemed it so. Cannot say from the two visits to Terror Behind The Walls that I felt anything weird or mystical and for lack of a better word spiritual. Guess you will all have to go out and see for yourself. This Haunt Definitely sits on Hallowed Ground. All the ingredients you would say are there for a Real Haunted Prison. Suffering, Death, Mean Spirits and the insane all lined these halls. At one time this prison held the worst of the worst. So we can tell where the Haunted idea comes from. Just cannot say we have seen or felt anything different. 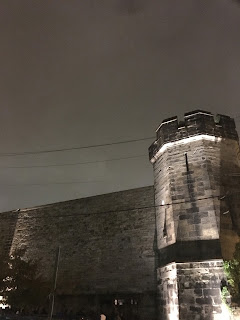 We also want to take the time to thank Nicole at Eastern State for working with us since early in the season and inviting us out to Terror Behind the Walls. Thank you so much! Greatly Appreciated.
Time to get into the attractions.

This year, Terror behind the walls started the HEX challenge. Which brings the whole Puzzle escape room to Eastern State. We did not participate in this program but from what we could hear from the crowd and bus folk is that it was challenging. Added some more depth to the night. And added a little more story depth to the theme of the haunt. Pretty neat idea that possibly next year we will dig deeper into.

Also, just like last year you can opt in for a more terrifying experience by wearing a glowstick necklace that identified you to the Scare Actors that you were willing for a more physical experience. With that being said we do have a couple bruises from being tossed around all night and being taken hostage and separated from the party. What I liked about with this separation feature at TBTW is you can get back to your group and enjoy the full attraction unlike some haunts that take you down a boring hallway that has nothing in it. To regroup with you friends when the attraction ends, missing half the cool stuff we go to see.

First attraction up for review was called Lockdown 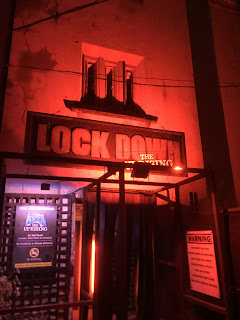 Lockdown was like advertised, all new! We were really impressed with this section of TBTW. The actors in this section were fully engaged. They did a lot of cool new things including a very weird, high pitched squeal that we are still not sure if it was them or a voice mod box but creepy none the less. Lockdown does what the title suggest. Gives you the feeling as being locked down as all the crazy zombie prisoners escape. This walk through was very long and in depth with many different scenes and images. Changing ideas at every turn. Basically this attraction changed itself every time you went thru a different room. Much less downtime as you walked through the cell blocks of the prison. This was much improved over last year and hands down our favorite attraction of the night. 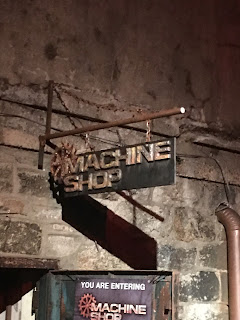 Just like the title suggests, here we walk through a broken down prison machine shop. Run by the crazy inmates. Very much industrial themed attraction that did a fantastic job with lighting, vision and really played with your mind. Since we opted in for the glowstick necklace. The actors fed on us like they should have. Great use of fog and spark effects where they should be. Not just a random exploding box where it doesn’t belong like we see in so many attractions. Our one regret from Machine shop was the lack of change. Not a whole lot different from the year before. With as many haunts as we visit we really remembered where the scare was. The arm burning in the foundry oven. We know that being in a historic landmark space is limited but change it up some. All in all though. Thanks to the dedicated actors in the Machine shop. It really saved this shorter attraction. 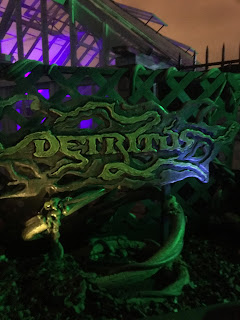 Detritus is a cool little walk through that also didn’t change much from last year. You get to walk through the haunted outdoor trail through what looks like it was once the garden or green area in the prison. Decent jump scares through this attraction due to the fact that the black camo covering hides so much. Really difficult to tell what is real and fake as you walk through the blond corners and dead end in TBTW version of the haunted trail. Not really much to this walk through and mainly actor driven. Again the Scare Actors saved this one from being a disaster. Great work with Ghillie suits as they were strategically placed in the black creepy camo netting that surrounds the entire attraction. We will throw in a bonus tip. Don’t forget to look up. Death is high off the ground. Detritus was a very short attraction but effective. As it was much shorter for the kids that bolted pass our group at about 50 miles per hour. 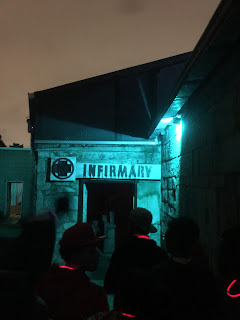 Just like the title suggest, you get to walk through a broken down hospital wing of a prison. This room did a fantastic job recreating an old-school prison hospital. From the dingy entrance to stretchers all over the place. Knocked down wheelchairs and using the actual prison walls to create a very disturbing look into what probably wasn’t the best medical care for the inmates. We rather enjoyed this short walk through. Anything you picture in a hospital scene was accounted for. From the crazy animatronic doctor office bed that shoots up on its own to a very talented scare actor waiting to rip out your teeth. We were fans of this attraction. Great use of lighting and props to create a disturbing image.

Now this is where the rollercoaster ride turned south for our group. We started this blog to give an accurate, educated look into these attractions. From knowledgeable haunt fans that really know what the show should look like. And what really brings the people in the doors. A True Haunt Rating for True Haunt Fans. Let us continue on our journey through Terror Behind the Walls. Next up…

We like to put a picture up for every attraction we go in. To help the audience get a better feel of the theme we are describing or what to look for when they get to attend for themselves but at this point at TBTW. We were moved so fast through the next attractions that time did not allow. No real time to enjoy the exits and see everything as we were mushed through like cattle. No chance to grab a drink, Relax and enjoy the night, just constantly pushed and pushed. Which is fine for some but needs work.

On to Quarantine 4-D.

This was your 3-D haunted attraction for TBTW. Throw on some 3D specs and enjoy the show. Great use of 3-D paint and blacklight effects throughout and awesome costume design by the design team. Hides the Scare Actors right in front of your eyes. But like I said, this where the haunt took a turn. 2 of the scare actors were too busy on their cellphone to keep the attraction alive. Yes, you read that correctly. Nothing kills the effect like an actor sitting on his cellphone out in the open with his head down instead of doing his job. This attraction is where we saw the lack of enthusiasm from the acting crew. Very short walk through followed by facebook statuses being more important that giving a scare really hit this attraction and overall haunt.

Finally on our road through Terror Behind the Walls.

We were rushed in to Breakout.

Breakout put you in the scene where all hell is supposedly breaking out and all the zombie inmates are escaping. We will say this was a pretty fun walkthrough. Very short like the rest of them after Lockdown. No real jumpscares anywhere but every actor did a really good job. The scene is something like an escape through a basement or storage room that runs you right out on to the concourse. Nice effect in the end and I will leave that at that.

After finishing the attractions there is a decent food truck set up with the Haunt essentials. Coffee, lemonade, Fried Oreos and pretzels. With a chicken finger meal and some nachos. Not a terrible ending to the show. Also if visiting make sure you check out the really cool souvenir stall that houses not only Terror Behind The Walls merch but also Eastern State Penitentiary souvenirs. Of course we had to pick up the collectable mug that was really nice. Fits the ever growing collection well.

This wraps up our coverage of Terror Behind The Walls 2016. We had a little bit of a hard time scoring the overall haunt. We were impressed with some and very disappointed in some. With everything being said and just being in a Government validated Haunted Prison with so much history we went with a…..Drumroll please………

This Keeps Field of Screams the Leader in the clubhouse...But a lot more haunts left!

That is our Coverage from Eastern State. Next upon the Chopping block…

Also adding two home haunts to our schedule this year so make sure you stay tuned for that an all the teams upcoming reviews.