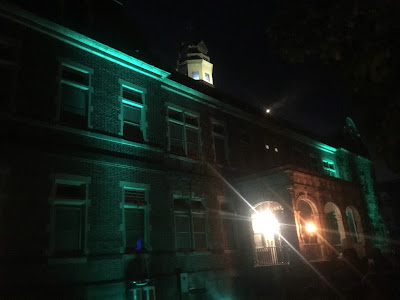 For the few that do not know, Pennhurst Asylum Haunted Attraction is actually located in Pennhurst State Institution and Hospital. Also known as the Eastern State Institution for the Feeble-Minded and Epileptic. Operating from 1908 to 1987, Pennhurst has seen its share of controversy. From unnecessary use of tranquilizers and psychotropic drugs, abuse of patients and even rape. Not to mention, the amount of deaths that happened on property. This is another government deemed Haunted Location. Where Eastern State was filled with prisoners, Pennhurst was filled with the insane. Or should I say, people that were considered insane in that time frame. One of the great things associated with this haunt, is the use of props that were left from operating years. Desks, Tables, Hospital beds, even a prosthetic leg for a child. Not to mention the countless other artifacts sprinkled all over the attractions.

Let us keep moving on with the review. The first attraction you walk through is Pennhurst Asylum. 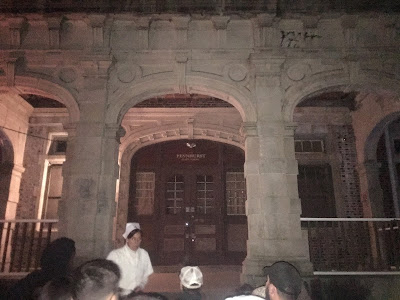 The Pennhurst Asylum attraction is a journey through the main building of Pennhurst. As we waited in line, we were entertained by crowd actors and flame twirlers. Added a nice touch while waiting to get in to the attraction. Pennhurst even added a nice coffee spot right in the middle of the line to keep you perked up. When the team was next up, you look up and see the original Pennhurst Hospital lit by a full moon. Excitement was rising within the group as we walked in the 108-year-old building. Once inside, you are greeted by an extremely bossy nurse that has to get you inline before entering the attraction. With amazing use of scare actors and original props, this was a must see attraction. The walk through takes you through two levels of the building. With different levels of hospital themed rooms, Pennhurst Asylum is a Haunt work of art. The actors for all attractions were on point all night. Every scene showed the commitment the scare actors put forth at Pennhurst. Our hat goes off to the job they did. These actors will be hard to top. After our journey through Pennhurst Asylum, this is the scores we voted upon.

Next up for the team was Dungeon of Lost Souls. This haunted attraction was located under the asylum. After walking down a few steps, you enter a big steel door where you are greeted by one of the creepiest scare actors we have found. This woman did an amazing job at making you feel uncomfortable. After the rules were given, you enter a walk through filled with even more props and great scenes. This attraction also gave your beloved writer his first jump. Yes, you read that correctly. I jumped a bit due to a great distraction actor and a very quick side actor in the Dungeon. The Dungeon also included one of the coolest lighting and fog effect we have seen this year. The only issue we noticed with this attraction was that the timing was off with the animatronics. The animatronic would trip before and after a group passed, missing the scare mark completely. Noticed this in three animatronics. With everything we saw in the Dungeon of Lost Souls, let’s go to the scoring.

On to the next stop, Tunnel Terror. This setting takes place in an old transport tunnel that was used to reach different parts of the campus. Legend states that nurses used the tunnel to transport patients around and removed the dead without upsetting the other patients. This walk through starts in the back of the main building. After you’re inside the black tiled tunnel, you are greeted by another wonderful scare actor. Rules are given and you are on your way. Tunnel Terror used light as a great distraction, using light to hide what is right in front of you. Also included in the attraction was great use of hidden scare tactics. Like the Dungeon of Lost Souls, we noticed some animatronics not working correctly. They were either off or timed incorrectly. The scare actors made this attraction what it was. Just like all of the attractions at Pennhurst, the actors do touch you. This always adds an extra touch to an attraction. Let us get to the scores.

The next stop on our tour through Pennhurst is very different from most Haunts. Pennhurst being an official actual haunted location according to our government, Pennhurst has an actual Ghost Hunt and Tour. Since this was not your normal attraction we will not be scoring Ghost Hunt. This tour starts off in a different building then the other attractions. After you enter the very old decrepit building, you get a tour of the little artifact exhibition set up with all kinds of different pictures showing you the past in Pennhurst. This provided you with a feel of what life was like during the operating days. After completing the museum, you get to wander around the first two floors of the abandoned building. With the ability to use your phone for light and try to catch a glimpse of ghosts. Now this is where we will add reader participation. We are going to post five pictures, taken two minutes apart from one another. We did not move the camera. Check it out and see if you find it odd. Look right in the center, towards the bottom of the pictures. Shows shading, "orbs" and only part of the photo not focused. 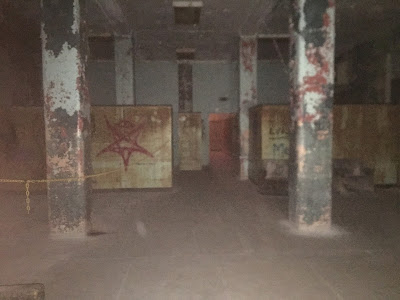 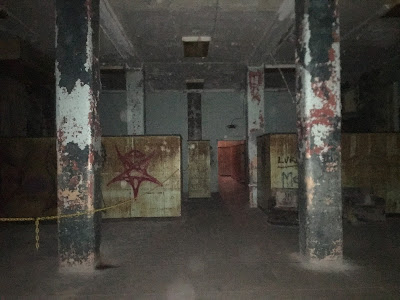 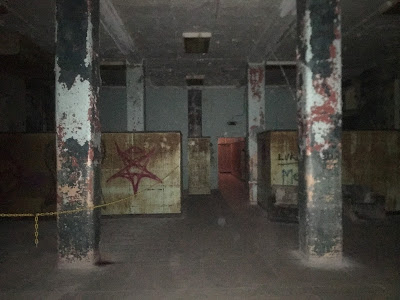 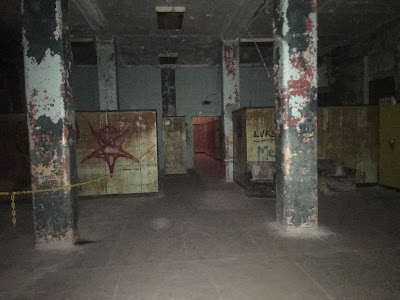 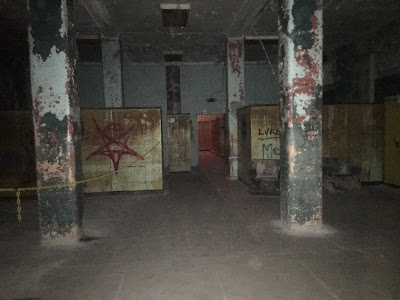 Now, we really don’t want to get into the theory of ghosts in this review. The pics show possibly proof of another existence or dust that does not move. You can be the judge.


After witnessing the museum and tour, we wished that we did that attraction first. We think it would have added to the overall creepiness of Pennhurst if the main attractions followed this tour. It adds the history to what was a very bad place in American History.


When all the attractions are completed you can head on in to the community area. Filled with a gift shop, coffin rides and a food stand that does NOT include Fried Oreos…Anyway, Nice setup with tables and music playing. Good place to warm up with coffee and talk about the attractions you just visited. Stop by the gift shop for some reasonably priced Pennhurst gear.

This wraps up our great journey through the Pennhurst Asylum. We guarantee that anyone that wants to check it out will not be disappointed. Hands down the best haunt from an actors’ perspective so far. This is the overall score for Pennhurst Asylum this year.

This gives HH365 a Three Way Tie for the lead. Who will take home the Halloween Haunts 365.com Award for 2016 Haunt Of The Year? Gotta Stay Tuned!!!!

This wraps up this episode of HH365. Until next time, Keep Haunting!