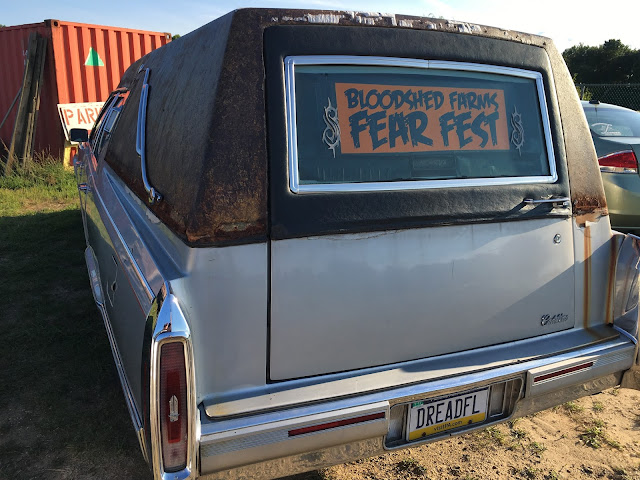 Before I begin the Preview I want to send out a HUGE THANK YOU!!!! to Owners Jim and Clark. The time you spent with us was so huge for us. We learned a lot and had so much fun! These guys were great people and Great Haunters. We will have the interview details later this week. Def stay tuned for that!

So arriving at Bloodshed Farms, We ran into Jim who was working on a pretty kick ass church scene. Where it goes??? We know but you have to go to find out. 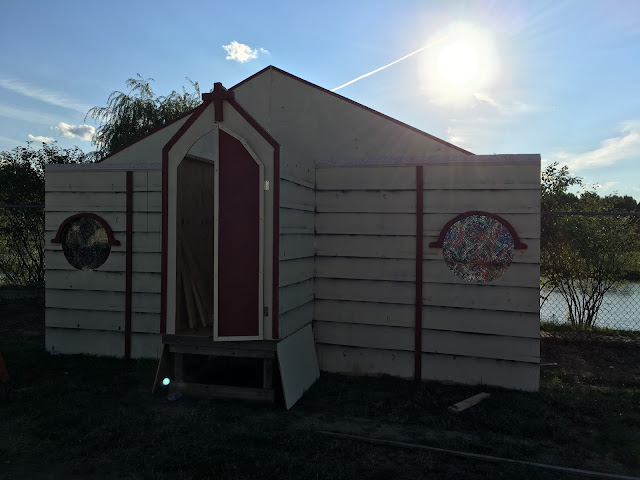 Still under construction but great detail! We really enjoyed this piece.

Well after talking to Jim for a couple minutes, we could feel his passion for this place and the Haunt Industry in general. So right then I knew our crew and Jim were going to have a great time!

After chatting for a few minutes he ran us through the New Hellsgate Asylum. Walking thru the new haunt attraction was so interesting hearing what we were going to see. Us coming from haunts our whole life could really see it. Filled to the brim with great ideas! Especially when in the holding area. Expect something Very Very Original that will add to the fear like we have not seen before.

About half way through, Clark met up with us. We could just feel the excitement of the owners right off of jump street. Going from room to room they really set every scene for us and what is expected. What we will see and experience. So many unique and very different ideas. Really expect to see a lot of new stuff that we have not scene.

After the Asylum, We walked across the Awesome Party area. Included are Games! Food! Fried Oreos! Along with the Games and meeting space where you can really just hangout and enjoy the night. We love this idea, starting to see it in more and more haunts and really it just improves the night. Your not just running through attractions and hopping in the car to leave. You can make it a night. Get a couple bites to eat, play some great games, Watch the other guests run for their lives.

Bloodshed Farms has basically completely re did their entire Haunt. They open October 1st. They will open with four amazing attractions.

"The Last Ride" The haunts very original Hayride that run about a mile long or longer. 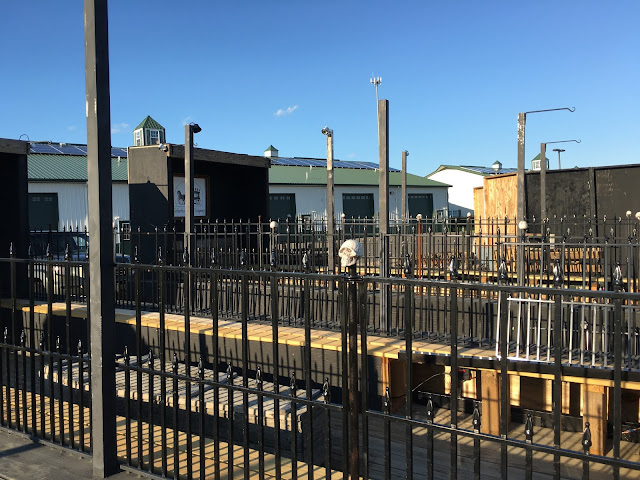 Here are the Carts you will ride to your death in. These took our breath away! Look at the Originality of these hayride carts. Sitting in the hay while your legs fall asleep are gone. Now we ride in style!
Instead of limping out of a beat up cart, the cart becomes part of the attraction! This is reason alone to stop reading and play with your calendar to make time. Go Now! were not going anywhere!

Ok. Now that you have marked a Friday or Saturday in October to go visit lets get back to the preview!

The new completely renovated Attractions also include Hellsgate Asylum. What we heard about this could equal up against any Haunted Attraction out there. Later this week we will add an interview we did with Haunt Actor Straight Jacket Sam. The asylum is his home. And he is ready for new souls to enter the asylum. Do you have the guts? You do. Just go do it.

Also added for 2016 is Clown O Phobia. A Crazy clowns funplace. This was still heavy under construction but what we saw and shown what the plan was OH MY GOD. We cannot wait for all the attractions but this one felt extremely special. Grin, Cheeks and Karnage are waiting to Terrify you. After our walkthru we were able to interview Grin and Cheeks. This interview will also be posted later on so you can learn about what it takes to do what they do, Where they came from and how delicious Fried Oreos are.

Also at Bloodshed Farms, Is the Trail of Terror. We will keep this attraction under wrap. If you want to find out more. Just get in the car. You wont be disappointed.

Then there is the BloodShed! WOW WOW WOW WOW. Really cannot put to words the premise of this completely original idea.  This is not for the faint of heart, Which in my opinion means EVERYONE needs to take a ride in the BloodShed. We have not seen anything really like this in our travels yet. Some close but not to this extreme. My hat goes off to Jim and Clark on this one of a kind Attraction.

Halloween Haunts 365 is very excited to see this show go live. They are open every Friday and Saturday in October starting October 1st. They added a Sunday show on October 9th. Plus a No Scare night October 30th. For what could be a pretty interesting family night to see what the youngins can handle.

After this preview, Halloween Haunts 365.com gives this a Must See New Jersey Haunt! With the owners working so hard and even alot of the actors working so hard every weekend go show your support. With a Goal of 10-15,000 visitors. Lets beat it. Just get out there. Located really close to both South and North Jersey, Very reachable from Philadelphia and Bensalem/Oxford Valley area.

Find all the information you need at
www.bloodshedfarms.com
Also the webpage is redone as well! Great work out of this Haunt! Keep up the good work!

Stay tuned tomorrow for our interview with Jim and Clark, Two men who love what we all love...getting that scare!

Til tomorrow   Thank you all so much!