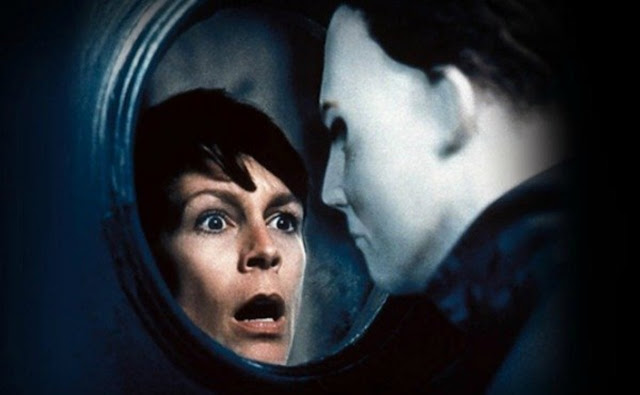 I really enjoyed this movie. It is close to the top of my favorite of the Franchise. Let us get to ten Fun Facts some may know but most will not about Halloween H20 Twenty Years Later.

1. During the scene where Norma is leaving, she stands in front of the car from Psycho (1960). The music playing in the background at this part is also from Psycho. Janet Leigh, who plays Norma, played Marion in Psycho. The license plate on the car is also the same as the second car Marion buys in Psycho, NFB 418, which are Norman Bates' initials.

3. LL Cool J had always been a fan of the Halloween movies. His mother took him to see the original when he was just nine years old.

4. During the credits in the prologue, Dr. Samuel J. Loomis' dialogue from the first film about Michael's incarceration is heard. The studio was unable to retrieve the unmixed audio from the original scene to reuse and were forced to tap voice actor Tom Kane to imitate Donald Pleasence, who played Dr. Loomis in the first six films.

5. P.J. Soles was originally approached for the role of Keri Tate's/Laurie Strode's secretary. Soles never gave a straight answer as to what she wanted to do, skeptical about returning to the series as someone completely different than her character Lynda, originally killed off in Halloween (1978). She eventually lost the role to Jamie Lee Curtis's mother, Janet Leigh, who was approached after not getting an answer from Soles.

8. According to Halloween: The Curse of Michael Myers (1995) writer Daniel Farrands, who wrote an early draft of the film, there was originally a scene scripted and supposedly filmed where a student in Laurie's class does a report on a book called "The Halloween Murders", in an effort to tie all the movies together. This was dropped however, when it was decided by the director and producers to ignore "H4-6" so as to concentrate more on the Laurie Strode aspect of the story.

9. In one draft of the script, Charlie was intended to be the killer, acting as Michael Myers copycat killer.

10. Molly and Sarah are shown watching Scream 2 (1997) when Will the guidance counselor checks in on them, a subtle nod to Scream (1996) when all the teens at the party watch the original Halloween (1978).

Well, there are ten Fun Facts we found about Halloween H20. That is all we have for you today at HH365! Where Every Day Is Haunt Season!