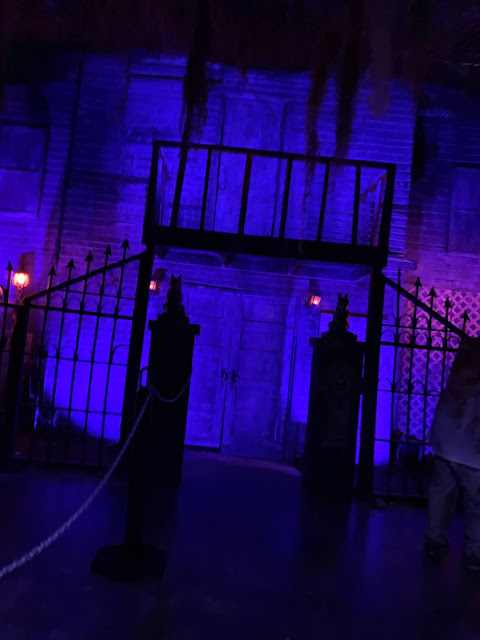 Welcome back to another edition of HH365! Today we take a look at a new Haunt for our website. Fright Haven. Fright Haven is the first Non Profit Haunt we have visited for a review. The scares give back to the community it is in which is Stratford, CT. Let us get to Johns review of Fright Haven.

Welcome back to my first review of the 2020 season. Today I’ll be reviewing Fright Haven in Connecticut. I previously visited here back in 2019 for their Saints Patrick’s day Event which gave me a general idea of what to expect from the normal season. Funny story about Fright Haven before I start the review, This haunt was actually the last haunted Attraction I went to because the day after I went, Corona happened and forced people to shut down, so I guess you can say I went out with a bang. Now let’s get into the review!

My friends and I pulled up to the parking lot around 9ish and I was impressed how how big the building is and how much room they had to play with. Tickets are pretty Reasonable, $27 for general admission, $40 vip, and $60 for front of line tickets. Fright Haven has one main attraction but it’s split up into three different Walkthroughs. I also want to give a shout-out to the staff over there because they have some of the best staff so that gives them extra credit in my books.

After scanning our tickets, getting our temperature checked, ETC we were finally able to start with the Attraction. The second we got in line they had about 4 line actors which were amazing and pretty creepy looking. The Clown wearing the swat armor was definitely one of the best actors working the lines tonight. We waited in line for about 20ish minutes which wasn’t bad especially since it’s their second week in operations for this season. The Scenes here are beautiful I remember waiting in line and looking up to see the first Facade and instantly fell in love. Now let’s get into the attractions:

The first part of the attraction was named PsychoWard 13:

Like I stated above the facade for this house was beautiful. So this is your basic asylum/hospital. Lighting was very well done here and the scenes were pretty well done, the one scene that sticks out to me is when your walking around the reception desk and one of the actors came sliding out under the desk and gave me a pretty good startle. Unfortunately though because of COVID I only counted 6 actors in the Psycho ward which is unfortunate cause you could definitely see where actors were going to be. Which some of the scares would’ve been pretty cool, I believe one scare would’ve involved beds. I love how they got the smells flowing through the house, You smelled poop, rotten food, and I believe vomit. This part of the attraction was pretty short I want to say we were in there for 7 minutes.  This attraction I rate.

The second part of the haunted attraction was WASTELAND. Now the way they do things at Fright Haven is it is one continuous attraction so I couldn’t take any pictures of The facade of this attraction and The 3D carnival. Wasteland was okay, they could’ve done a little better for this segment of the haunt. This segment reminded me a lot of Nocturnal Wasteland from Field of Screams. Now my two complaints from here on out is this the lack of actors get more noticeable which I can’t blame the haunt because you guys know COVID happened and the second complaint is that Wasteland and the 3D Carnival seem to be pretty short. Wasteland also reminded me a little bit of Mad Max for some odd reason, I guess it was because of the actors costumes. But where they were lacking in actors and length of the attraction once again I have to say that the scenes are the best things here besides the actors. Walking through run down buildings, houses, and it was either a farm or some sort of swampland but the actor in there was the best with his lines that performed. This attraction seemed like it was about 5 minutes at most. This attraction I rate:

Now the final segment of Fright Haven is 3D Carnival of Lost souls. This attraction was in my opinion the worst one because there was only 3 actors. Scenes were basic 3D painted clown faces on the walls like the walls at the fun house down in point pleasant beach funhouse. This was also the shortest out of all the segments here. We were in the carnival for 3 minutes. Now I do give credit where credit is due, the actors really held this segment together, the one actor that sticks out the most to me is the clown wearing a tank top cause he was pulling off a lot of unique scares coming from the littlest hole in the wall from the ceiling, he really was all over the place. I did have high expectations for this last part of the attraction since it is the grand finale but it was just a major let down. I give The 3D carnival of lost souls:

Fright Haven is a really good haunt and I did enjoy my time there but there is always room to improve especially in The Carnival. They also do Off-season events, and I believe a paranormal tour of the building after the haunt is closed down. So I give Fright Haven as a whole:

I definitely will be coming back probably next season to see what kinds of changes they made. I’ll see you guys in my next review, thank you guys for reading!
Well, that is what we have for you today, another review in the books, we have a ton more coverage coming your way for Haunt Season 2020, so make sure you keep it here to HH365! Where Every Day Is Haunt Season!
Posted by Halloween Haunts 365 at 9:50 AM