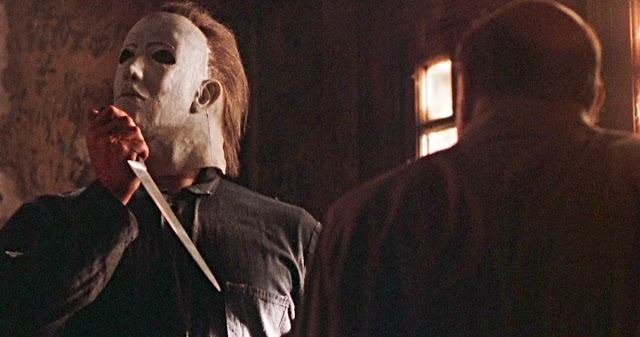 Welcome back to another Fun Facts Friday brought to you by HH365! Today we have the next Halloween franchise movie to see if there are any fun facts around. Not the best movie out of the Franchise but it is still Michael Myers! Let us take a look at the fun facts!

1. When Jamie starts sensing Michael near Billy, Dr. Loomis is walking in the hallway. The sign tattooed on Michael's wrist and the man in black can be seen on the wall behind Dr. Loomis.

2. The script added two bumbling cops, Deputies Nick and Tom, with their own "clown theme" in the background to homage a scene in Wes Craven's The Last House on the Left (1972).+

3. Donald Pleasence had disagreements with Akkad and Othenin-Girard citing that Jamie should have been portrayed as "all evil" after stabbing her stepmother, Akkad disagreed thinking that fans wanted to see more of The Shape. In an interview, Danielle Harris explained what she thought of the idea: "The way Halloween 4 ended I thought I was going to be the Killer, I thought it would have been fun to come back as the Killer or Michael's sidekick. Scary, but fun".

4. This is the first time Michael Myers is shown driving since the original Halloween (1978). While it's obvious he drives a tow truck in Halloween 4 (right after Loomis confronts him the the garage/diner), you never actually see him behind the wheel.

6. Unable to find a small Victorian house like the Myers House in Halloween (1978), the filmmakers chose a bigger, more mansion-like house because they needed a house that could provide wide rooms, hallways, an attic, a basement, and a laundry chute.

7. Danielle Harris and Don Shanks became good friends over the course of filming, reportedly spending a lot of time together while off set.

8. Don Shanks revealed that it was extremely difficult to breathe in the mask because it had no ventilation.

9. Lori Petty was a final contender for the role of Tina.

10. Moustapha Akkad has said that one of his biggest regrets about the film was killing off the character of Rachel Carruthers. In retrospect, he would've kept her alive, but she was killed in an attempt to show that no one, not even Rachel, was safe from Michael.

That is what we have for you today at HH365! Where Every Day Is Haunt Season!
Posted by Halloween Haunts 365 at 9:11 AM