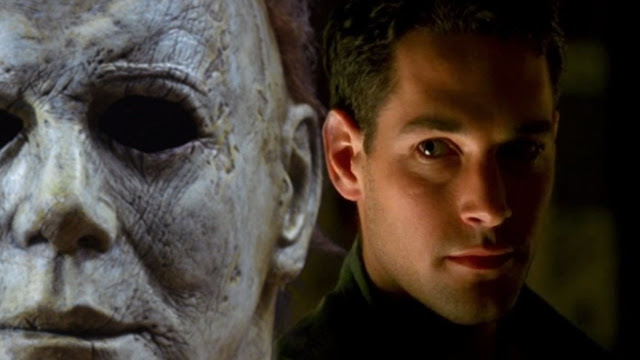 Welcome back to another day and another episode of Fun Facts Friday. Halloween The Curse of Michael Myers is one of my favorites. Sure, it is not the best film of the Franchise but it tries to add Depth and had some pretty cool Characters. Also, some really cool kills for the Franchise. But enough of me defending myself against liking this film, just deal with it! Let us get to some fun facts about it!

1. Of course, Paul Rudd made his Film Debut in this film playing Tommy Doyle, the young man that survived Myers in the first film.

2. The original title of the movie was "Halloween 666: The Origin of Michael Myers".

3. Only Halloween in the entire series to be filmed in the fall.

4.  It had the largest opening weekend out of the entire series until Halloween (2018)

5. In the original draft of the movie, when John came home from work, he turned on the TV and the scene of the boy dying from the mask in Halloween III: Season of the Witch (1982) was shown.

6. Debra and John Strode were named after John Carpenter and Debra Hill who produced the first three films of the series.

7. Dr. Loomis and Michael share no scenes together in the movie.

8. Only film in the series to have a male protagonist.

9. Howard Stern was originally offered the role as radio "shock jock" Barry Simms, but turned it down.

10. The room used in the sanitarium in which Kara is contained and escapes from is numbered 237, the same number as the infamous room from The Shining (1980).

Well, that wraps up today's Fun Facts Friday, Next up is H20 and I am sure that is filled with a ton of facts and Easter eggs through out it! So Keep It Here To HH365, Where Every Day Is Haunt Season!
Posted by Halloween Haunts 365 at 9:32 AM