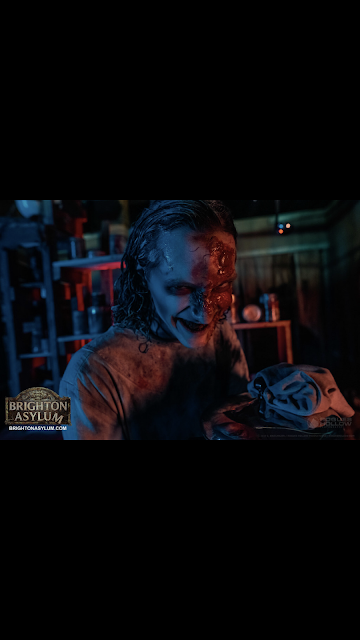 Welcome back to another episode of Halloween Haunts 365.com! Today we continue our Haunt Actor Interviews. If you are some of your staff would like to participate, just reach out to us over on the right on any Social Media platform and we will tell you how its done, it is very simple and easy to do and we want you guys to have the recognition you deserve! Now, let us meet Frankie!

1. How long have you been Haunting for?
As a child my family was pretty involved in Halloween and I would look forward to the season all year, but when I was around 13-17 years old (27 now) I volunteered at a few local haunts that would be taken down after the season giving me a real taste of raw Haunting. It wasn’t until 2015 that I found my home current Haunt Brighton Asylum which has taken all the aspects of what I love about Haunting and really taken things to the next level in terms of Atmosphere and performance!

2. What brings you back to haunting year after year?
I crave the creative stimulation performing provides and Haunting is something where you don’t have to hold back with ideas.  I love interacting with thousands of guests while being able to set a tone and make them feel immersed. I love to be in character and entertain people.  Also, I love Fall smells like the crisp Autumn air and those Halloween Yankee Candle specials......

3. Where did you start Haunting?
First experience Haunting ever in my life would have been at my Catholic School Halloween dance. My Mom and Dad along with a bunch of other parents dressed up and decorated behind the stage of a gymnasium. I can remember sticking my head out from behind the curtains with a mask on and seeing all the other kids at my school freak out.

4. What is your favorite part of a night in the Haunt?
My favorite part is when my fellow actors and I are able to feed off of each other while we are outside on Queue because it creates a lot more depth to a Haunt in general. I love ambiance and setting the tone for different scenarios throughout each performance.

5. What is the worst part of working in a Haunt?
I lack sleep because of my fulltime job and the Haunting schedule.

6. What is your all-time favorite scare onto a customer?
The scare that breaks the tough guy act and makes them genuinely creeped out. The one where they don’t know if it's real or fake anymore. The one that makes them question.

7. What is your Favorite Haunted Attraction outside of your Haunt?
I was fortunate enough to win a trip to Halloween Horror Nights through Brighton Asylum and I was really impressed by the sets, themes, and makeup. The overall vibe of Universal Studios during Halloween Season really did it for me.

10. Where does your inspiration for your Character come from?
My inspiration comes from various places but for the most part the dry blueprint of my character “Frankie” was supposed to be my personality but with aggressive tendencies and selfish almost narcissistic. I like to pull inspiration from darker music mostly the metal genres Deathcore and Hardcore to help me use my diaphragm so I can create distortion and weird unsettling tones when I'm talking or yelling. I also pull some inspiration from RPG video games and how they put NPC characters to guide you during a playthrough. During a performance I'll see certain guests outside and then because I'm able to roam the entire Haunt this gives me the ability to meet them, follow them or ambush them. I will wait propped up against a wall with my hands crossed until the guests interact with me first. I guess that’s where I was going with the NPC character point!

12. Do you expect Haunt Season 2020 to be vastly different than other seasons?
Yes and No. I do expect there to be some changes on how things are run but for the most part I feel like people will be happy to be experiencing safe frights and laughs again.

13. How long does your make up setup take per night?
It usually takes our wonderful makeup artist who created the early stages of my look                     about an hour with final touches. I love the process but by then I'm usually so ready to be in full character that sitting in the makeup chair messes with me.

14. How often do you work on your Character?
I'm guilty of always thinking about what I can do to make my character better in any way. It’s a passion to bring to life a character that you feel is special. The customers are always trying to trip me up and ask me questions about my origin so it’s a blessing that I'm always thinking lol!

15. What do you do for a living outside of haunting?
I work for the state of NJ at the Palisades Interstate Park. When I'm not serving food at the café that overlooks the Hudson River, I'm either collecting the recycling around the other sites in the Park or telling people not to stand on the rock wall where there's a 480 ft drop and a sign that literally tells them not to do that.

That is Frankie, Make sure you go check him out at his Haunt! And That is what we have for you today at HH365! Where Every Day Is Haunt Season!