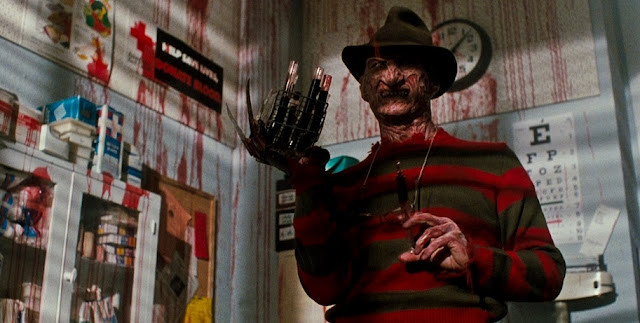 Welcome back to another edition of HH365! Today we continue Fun Facts Friday with A Nightmare on Elm Street 4 The Dream Master. This was a fun film and I always enjoy the re watch. Today we will go over 10 fun facts about this film you may have not known before! Before we explore the fun facts let us give photo credit to New Line Cinema for one of the best scenes in the Franchise! Let us get to the facts.

1. This was the highest grossing film in the franchise right behind Freddy VS Jason. A lot of that due to the epic success of Nightmare 3.

2. First Film that Robert Englund finally had the top billing in the film.

3. The Diner Alice works in is called the Crave-Inn, I really hope I do not have to explain that reference.

4. When they replaced Patricia Arquette with Tuesday Knight, it also helped provide the opening song that Tuesday Knight performed for the movie.

5. The success of this film gave producers the Idea of Freddy's Nightmares, The "Very Interesting" television show that Robert Englund hosted and sometimes played in.

6. This is the only film in the Franchise that shows the Elm Street House in Daylight.

8. Robert Englund's Favorite scene in this film was the time loop scene because he felt it it was like a never ending nightmare.

9. Kincaid has a poster up on his wall of The Hill Have Eyes (1977) A nod to Wes Craven who directed that film.

10. It was Robert Englunds Favorite Film in the Franchise.
Posted by Halloween Haunts 365 at 1:18 PM