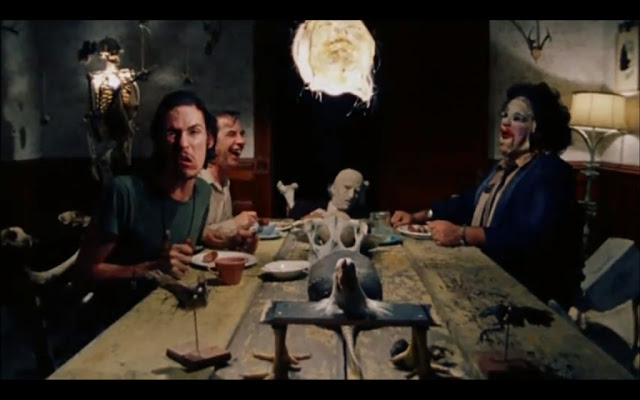 Welcome back to another Fun Facts Friday at Halloweenhaunts365.com. This Friday we will be bringing you 10 fun facts about the original Texas Chainsaw Massacre. This movie will always hold a special place in history as it was very close to the first of its kind. Let us get to the facts!

1. There are many inspirations behind this film. The most common is the Ed Gein story. The Wisconsin murderer who made clothes and other things out of his victim's skin. Another one was when Tobe Hooper had to sit in line waiting on Christmas Shopping and saw a stack of Chainsaws, He envisioned how to get to the front of the line real quick.

2. Leatherface is also inspired by a Doctor Toby Hooper knew. He told Tobe a story where when he was in Med School, they were using cadavers in class and after hours he snuck into the Morgue to make a Halloween mask using the Cadavers faces. That is why Leatherface has his skin mask.

3. The original script was called "Headcheese". Then it was later changed to "Leatherface". It was not until a week before shooting was set to begin that they changed the title to "The Texas Chainsaw Massacre".

4. The Narrator of the opening scenes was none other then a young John Larroquette.

5. Even though the teeth were removed for some shots. The Chainsaw used was 100% real.

6. It has an alleged connection to "The Mafia". The company that bought the distribution rights to the film was said to be owned by Joe and Lou Peranio who were members of the Colombo crime family.

7. You can have lunch at Leatherface's house. The property where the filming was shot was actually turned into a Diner where you can actually check out a lot of cool memorabilia from the film.

8. Ed Neil, The hitchhiker in the beginning of the film, would actually go to showings in theaters and wait for his scene to come on and then tap and unexpected patron on the shoulder and scare them to hell.

9. The scene where Sally's finger was cut to feed Grandpa took so many takes and so many failed special effect takes that Gunner Hansen took off the protective tape from the knife and cut the actress for real when no one was looking. Gunnar said that they were at 27 hours for that scene alone straight and he got frustrated and wanted to get it done. So Sally is bleeding for real in this scene.

10. The lack of on screen blood was for a reason. You would think with Chainsaw murders and a Cannibalistic family the film would have ton of red liquid. Nope, Hooper wanted to try for a PG rating to get to more viewers so there is really only a few ounces of real and fake blood present. Which really sucks because it got rated R and we could have seen some crazy gore coming out of the mind of Tobe Hooper.
Posted by Halloween Haunts 365 at 8:09 AM