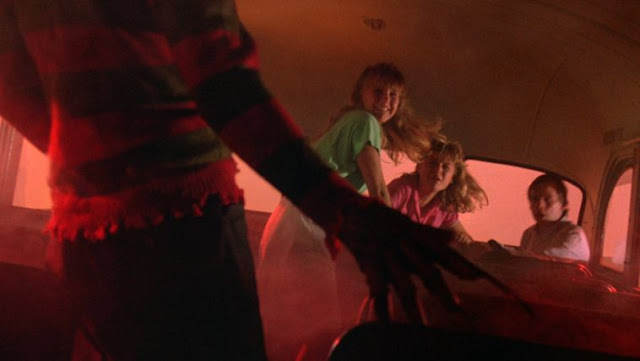 Welcome back to HH365 for Fun Facts Friday. Today we will learn some fun facts about in my opinion the Worst Nightmare movie in the franchise other then the remake. Let us get to the fun facts.
1. New Line Cinema originally refused to give Robert Englund a pay raise, and an extra was cast as Freddy at the start of the production. After two weeks of filming, Robert Shaye fixed what was almost the biggest mistake in New Line Cinemas life span and gave Robert the pay raise.

2. In the opening Dream Sequence, Robert Englund plays the bus driver that opens the door outside of make up.

3. Michael J Fox was considered for the role of Jesse Walsh. He has to back out due to scheduling with Back to The Future and Teen Wolf.

4. The only Nightmare film to have a Male Leading Actor.

5. It is not only my least favorite nightmare film, It is also Robert Englund'

6. It is the only film in the franchise where Freddy kills victims outside of their dreams.

7. Robert Rusler auditioned for the role of Grady on the last day of shooting Weird Science. Robert Downey Jr. drove him to the audition.

8. This is the only film in the series not to use Charles Bernstein's original theme or a variation of it.

9. Brad Pitt, John Stamos and Christian Slater all auditioned for the role of Jesse

10. Kim Myers was allegedly cast because of her resemblance to Meryl Streep.

Well, those are some interesting facts about a not so great film. That is all we have for you this week at HH365! Keep it here to HH365! Where Every Day Is Haunt Season!
Posted by Halloween Haunts 365 at 12:21 PM