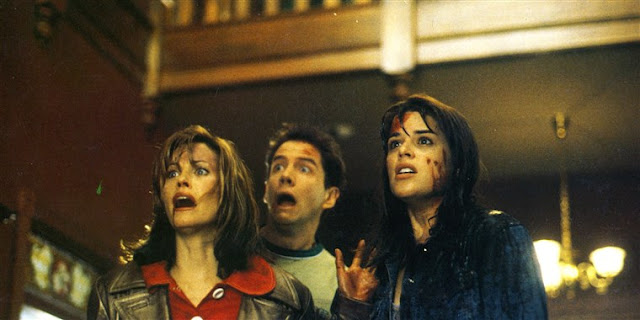 Welcome back to HH365 for Fun Facts Friday! A segment about all the fun facts about your favorite Horror Movies. This week we will cover Scream (1996). Let us get to the fun!

#1. The Original title of the film was "Scary Movie".

#3. Williamson's Script which only took him a weekend to write went into a gigantic bidding war. He then accepted Dimension's offer of $400,000 dollars. That is a nice weekend of work!

#4. The Weinstein brothers initially wanted either George Romero or Sam Raimi for the Director seat but both turned it down. Thankfully because it went to one of my hero's Wes Craven.

#5. The mask Ghostface wore was found while Wes was location scouting and it was in one of the houses they were scouting.

#6. Linda Blair has a Cameo as one of the news reporters outside of the school after the first murders.

#7. Wes Craven plays the Janitor "Fred", who is wearing a Kruger type fedora and sweater.

#8. The final scene at "Stu's" house took 27 straight nights to film. The Cast called it "The Longest Night In History".

#9. Drew Barrymore was supposed to play the role of Sydney Prescott, but was forced to a smaller role.

#10. Drew Barrymore asked that her wig be modeled after Michelle Pfeffer's Hair in "Scarface".

That is what we have for you on this Friday!   Make sure you keep it to HH365! Where Every Day Is Haunt Season!
Posted by Halloween Haunts 365 at 12:31 PM