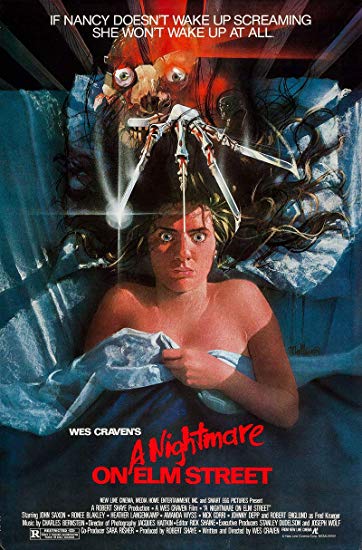 Welcome back to another Installment of HH365! Today we will start something new that many Horror fans and I find Interesting. We will start a new segment called, "FUN FACTS FRIDAY". It will cover some of the most well known Horror movies of our time and just give ten quick fun facts that some people may not know. Of course, Some of us diehards of the Franchises will probably know the lot. Where as some may not know many. But let us start with my Favorite Franchise. 10 Fun Facts About A Nightmare on Elm Street.

10. Freddy Krueger really was a bully. The Famed Villain was named after a Bully of Director Wes Craven growing up. You need to be careful of who you mess with.

9. That Pure Evil Ugly Sweater was not a mistake. It is scientifically designed to be scary. The colors Red and Green together do horrible things to your brain when see overlapping, causing you to already feel uneasy looking at his sweater.

8. Freddy Krueger's Face Design Is Delicious. The Art team met with Craven at a pizza shop to actually pitch the idea of the burn victim. The main artist started to form Freddy's face out of a pepperoni pizza. YUM!

7. The Infamous Fedora was a thing of Nightmares before Freddy was developed. Another inspiration for our famed Nightmare Crawler came when Wes was a young kid and awake looking out the window very late at night. A Stranger wearing a fedora stopped in the middle of walking and Wes fells like he could feel him staring at him. The Stranger looked up and his Fedora covered most of his eyes has he gave a scary scowl back up at Wes. Wes then heard the front door of the Apartment building open and he went running for his covers and that was one of the biggest inspirations for our man Krueger.

6. It is loosely based on a real life story. Wes Craven read about a Teenage Boy who died from his Nightmares. For weeks, the Child was doing everything he could from falling asleep from "Caffeine pills" to "Coffeemakers in his bedroom". Hmm Familiar. Once the child finally fell asleep. He did not wake up again.

5. One of the Original Gloves used in the Original nightmare On Elm Street was stolen and is still missing to this day. My money points to Robert England, It is Most definitely NOT at my house!

4. ANOES was Johnny Depp's first film. Turned into one hell of a career if you ask me.

3. We actually have Freddy Krueger to Thank for Luke Skywalker. Way back when Star Wars, A New Hope was casting. A young Robert England and Mark Hamill were roommates. Robert England did the casting call for Star Wars and when he returned home he talked Mark Hamill into giving it a shot. The rest is History in a Galaxy Far, Far Away.

2. Noone Wanted This Movie. Wes Craven and Bob Shaye basically had to Guerrilla Market this movie to theaters on their own to get this movie to play. This movie is the reason why New Line Cinema became so large of a movie company. A lot of hard work by Robert Shaye, An amazing piece of art by Wes Craven gave birth to one of the biggest names in movies in the 1980s and 1990s. It really was the house that Krueger built.

1. The Entire Movie, with the real time special effects with no CGI, Only took 32 days to complete shooting. So all of the crazy nightmare scenes from Tina flying around a room, Rod being hung, A phone trying to hook up with Nancy and my all time favorite kill in any horror movie, the juicing of Glen. All took just 32 days to shoot. Amazing considering they did not have the tools we do today, and besides that. It always looks better with practical effects.

That is our Ten Fun Facts about A nightmare On Elm Street. Keep it here to HH365! Where Every Day Is Haunt Season!
Posted by Halloween Haunts 365 at 8:37 AM