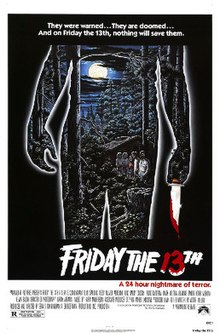 Welcome back to the next episode of HH365! Today is Friday so we will continue our segment of Fun Facts Friday! Today's edition will be around the borrowed picture above. Friday the 13th 1980. Let us get to the fun!

9. The Camp used for shooting is still in use. The camp called Camp No-Be-Bo-Sco, is a Boy Scouts of America camp located in the great state of New Jersey. Access was denied for a long time but they are starting to run tours and you can sometimes actually camp in the original camp Blood.

8. Betsy Palmer gave Pamela Voorhees her backstory. Without much direction from Cunningham, Mrs Palmer was more of a Method Actress, so she found it important that our beloved Murderer had a deeper story to play off of.

7. One of the Actors, Harry Crosby who played Bill, was temporarily blinded by fake blood. The Great Tom Savini used a chemical to help drench clothes in blood in this certain mixture that was pooled into Crosby's eye. Crosby was rushed to the hospital but ended up completely fine.

6. The main Score of the film was created from a line of dialogue. Ki KI MA MA. Came from Pamela Voorhees imitating her lost son Jason saying "Kill Her Mommy, Kill Her". This has really stood the test of time and kept us on our toes ever since.

5. Several Crew Members played the killer before Betsy Palmer signed on. With shooting already under way, they had to be imaginative will scenes from the killer with no actual killer on staff yet. A lot of the crew members actually hold the murder weapon through out the movie.

4. Kevin Bacon's Death scene was almost cut and not used because of the difficulty.of the special effect. Everyone remembers Kevin Bacon being done in by an arrow into his throat from underneath. That effect took hours to do correctly. Anything that could have gone wrong in this one take scene did. From Bacon having to sit uncomfortably on his knees for hours, Tom Savini and his crew member doing two separate effects that needed to be done at the same time and also the Director of Photography to hold down Bacon's head.

3. Jason Voorhees was supposed to be a regular boy who had drowned at Camp Crystal Lake. After a rewrite from a writer that the Financier brought in to add some things to the original draft by Victor Miller, Jason became the deformed child we know and love today.

2. The last scare where Jason jumps from the lake is not in the original screen play. There is no proof as to who added the final jump scare right before the hospital scene where they did not find any boy! Tom Savini wants to take full credit for it, and looking at that scene. I am willing to give it to him.

1. Friday the 13th was almost called something completely different. Sean Cunningham wanted to keep it holiday oriented so it could match the success from Halloween. The original title of this script was actually called "A Long Night At Camp Blood". Now we can nail down why it was called this heavily in part 2 and some of the other following movies.
Posted by Halloween Haunts 365 at 10:13 AM