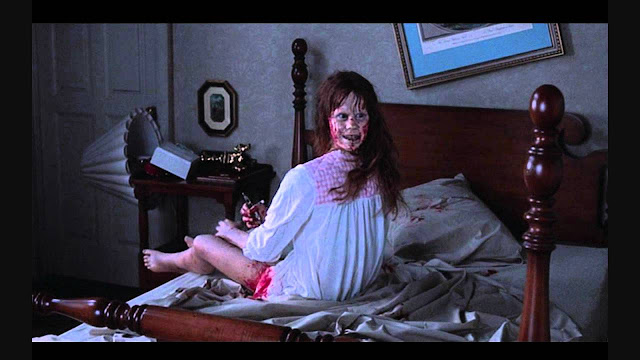 Welcome back to HH365 for another installment of Fun Facts Friday. Today we will find some fun facts about one of the classic Horror Movies, The Exorcist! Lets get started!

1. The scream that comes out of Reagan when the spirit is exiled from her body was made by recording squealing pigs being dragged to a slaughter house.

2. Ellen Burstyn, the actress that played Reagan's Mother actually suffered a permanent spinal injury during the stunt where she was thrown away from her possessed Daughter's body. A harness pulled her away from the body and as it pulled her, she slammed her coccyx into the wall and screamed out in pain.

3. If adjusted for Inflation. The Exorcist would be the top grossing Rated R film of all time.

4. The substance that Reagan spewed all over the Priests was specifically Anderson's pea soup. The crew tried Campbell's brand but the director did not like the consistency.

5. Linda Blair, Reagan, accidentally received her Best Supporting Actress Nomination because it was supposed to go to Mercedes McCambridge who had actually provided the voice for the demon. With the nomination not being able to be changed, the Academy made sure that she did not win her nomination.

6. Due to Death Threats against Linda Blair from crazy Religious zealots who believed that the film glorified Satan. Warner Bros. had bodyguards protecting Linda for six months after the release of the film.

7. At one point, William Friedkin had such a hard time casting for the role of Reagan that he was thinking about auditioning an Adult Dwarf Actors.

8. Linda Blair injured her back while being thrown around in bed when a piece of the rig broke and she was slammed harder then expected.

9. The sound effect of Reagan's head turning 360 degrees was actually a leather wallet being twisted in front of a microphone.

That is what we have for you on this Friday! Make sure you keep it here to HH365! Where Every Day Is Haunt Season!
Posted by Halloween Haunts 365 at 8:29 AM