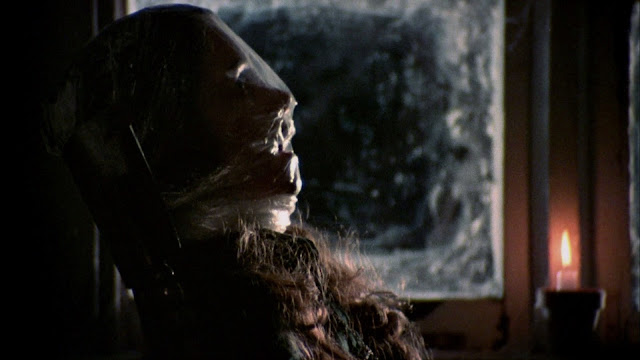 Welcome back everyone to another episode of HH365, Today we will have our Movie Review of the week. Black Christmas. Let us get to it. Christmas you say! Yes, we are a little backed up on movie reviews but this is still one of the original "Slasher" films so I decided to stick to it and post it! Lets get to it!

"Oh, why don't you go find a wall socket and stick your tongue in it. That'll give you a charge."

Story:
"During their Christmas break, a group of sorority girls are stalked by a stranger."
The film opens at a Sorority house during Christmas break. It's the last night before everyone goes home for the holidays. The girls all gather around the phone, because "The Moaner" has called them once again. They listen as the man on the phone goes on about some really unsettling things. Barb (Margot Kidder's character) tells him off, to which he replies, "I'm going to kill you." This story really isn't complex. We get to look into the lives of these sorority sisters as someone is killing them off one by one. The phone calls they receive add to the mystery. Who is this mysterious caller? Why does he want to hurt the girls in the house?

Acting:
These are all seasoned actors and actresses. Margot Kidder and Olivia Hussey are both horror favorites, and they pretty much carry the film. John Saxon also plays a cop in this one. Everyone would later know him as Nancy's dad in Nightmare on Elm Street (1984). I like how real these actors make this movie feel. They all seem like normal people and down to earth (unlike the way that sorority girls are now portrayed in film).

Fear Factor:
I've always found Black Christmas to be completely unsettling and just down right creepy. "The Moaner", or "Billy", is one of the scariest and mysterious killers in horror history. I love the twist that this film has to offer, and along with the fantastic way that the film is shot, it truly makes it one of a kind. This is the type of slow burn that I really enjoy. The phone calls are literally the stuff of nightmares. That has always been my favorite part of this horror classic.

Originality:
At the time, slasher films were not a thing. This was a very new format in the horror genre. Besides Texas Chainsaw Massacre (which released two months prior), nothing like this had really been done. Bob Clark has a complete horror masterpiece on his hands, and it's been that way since day one.

Overall:
I don't think it's a surprise to anyone that I completely adore this film. Everything from the story, to acting, to cinematography, to the kills, and just everything in between is just perfect film making. This is the kind of horror that just gets under your skin, and is very hard to come by. I couldn't recommend Black Christmas enough! "If this picture doesn't make your skin crawl, it's on too tight!"

Next week, I'll be reviewing the 2006 remake of "Black Christmas". If you haven't had the chance to watch it, please do! "On Christmas Eve, an escaped maniac returns to his childhood home, which is now a sorority house, and begins to murder the sorority sisters one by one."

Well, it is apparent that she loved this movie! I have not personally seen this one yet but it is on the list. Great Review!

Yes, With the holiday season the website has been a bit sporadic but we will have it back to new posts everyday soon! Thank you for stopping by and continue to check us out at HH365! Where Every Day Is Haunt Season.