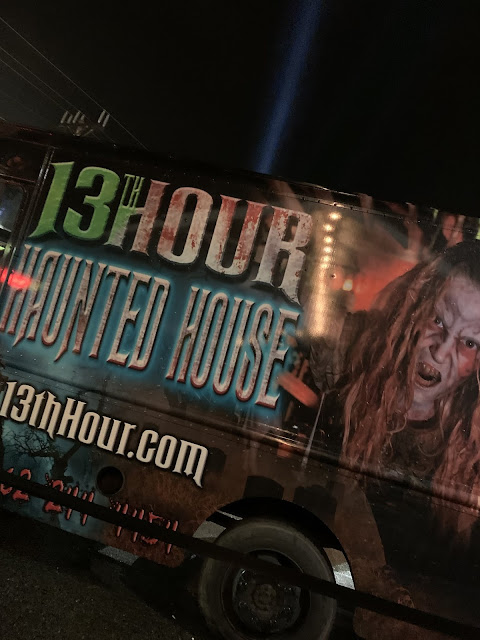 Welcome Back to another edition of HH365! Today we have another review from John, Our outside help who goes to even more Attractions then we get to go to. Let us get into John's Review of 13th Hour Haunted Attraction.

It was a late rainy Sunday night when two friends of mine and I were looking for a haunt that was open and we stumbled across 13th hour in Wharton NJ. It is tough to find Haunts open on Rainy nights as most of them have outside attractions.

Once we arrived we paid $33 bucks for a general admission ticket for the 3 attractions they had.

They did have multiple food trucks and a few games to try your luck at. They also had many photo oops to take your infamous selfies at. Also, they have four different escape rooms and a VR escape room. This was kind of new with the VR escape rooms, Many Haunts have added escape rooms to the night out but we have not seen many VR escape rooms in our travels.

The first attraction we did was the House of Nightmares.. This was a little interesting, the pre show was an actor who gave you a back story about what the 3 haunted houses are about and the Hayden  family that lived there. You then go through a time machine before the actual attraction begins.  This was a very typical haunt attraction. Creepy killer clowns, Chainsaws, dark hallways, and so on. The actors were okay at best in this part of the haunt but the props were pretty cool. Some of the scenes in this part were pretty fantastic too. It was truly beautiful at some parts. The Backstory to this house is what made it interesting. So pay attention to what the actor in the time machine is telling you because if you don’t pay attention you might miss some stuff. Lets get to the scoring.

Next up was The Attic!!

The attraction was short. It felt like we were in there for close to 5 minutes. This Attraction had very little actors. The story was that some of the family was hiding in the attic and killing people up there. It was just really really boring. We did not enjoy this Attraction at all. Let us get to the scoring.

The last attraction of the night was The Darkside of The Hayden House.

This attraction was a mistake. I know it sounds kind of rough, but just hear me out on this. Pitch black maze’s are not scary. They are annoying as can be. This attraction did not make my opinion on them better. The actors are annoying and even worse, they have little bug zappers that they make go off every second. Also, they give you these pearl glow necklaces for no reason. You could see anything. The props that you were able to see were pretty cool so I give them that. But honestly haunts should really stop doing pitch black houses and make a good attraction. Let us get to the scoring.

My time here at 13th hour started  off really good but as you can tell it just started going downhill really fast. I would come back here but only to see how their off season events are. I believe this Haunt needs to continue adding to keep people coming back. If I am only thinking of coming in the off season and not for the Main Show, you can see that it needs to keep building. Let us get to the overall rating for the 13th Hour.

There is a ton of room for this Haunt to grow. Let us hope they continue the charge and build on what they already have. That is all for HH365 today! keep coming back as we have so much more to get through! Keep it on HH365! Where Every Day Is Haunt Season!