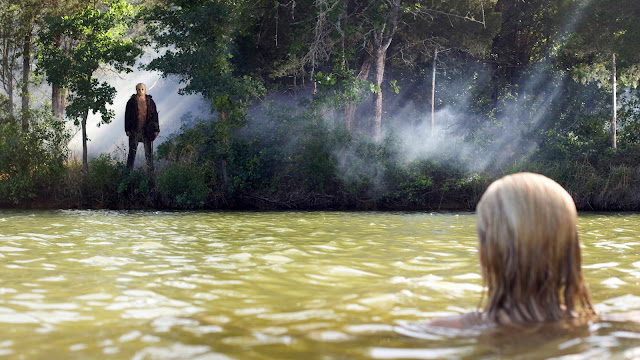 Welcome Back to another episode of HH365! We hope you enjoyed our coverage of Field of Screams 2019! They did a wonderful job! Now, lets continue our Movie Reviews with TheMovieVlog! The Friday the 13th Remake which i did actually enjoy. Very few remakes do I enjoy but this was easily one of them, Ill stop blabbing, let us get to the review.

"Oh, wow! Your tits are stupendous!"

Story:
"A group of young adults discover a boarded up Camp Crystal Lake, where they soon encounter Jason Voorhees and his deadly intentions."
The very beginning of this film shows a new Pamela Voorhees screaming at a young girl. We see a young disfigured boy watching them from the bushes. The girl quickly kills Mrs. Voorhees during the opening credits. We see young Jason go over to his decapitated mother, before it cuts to the next scene.
We are introduced to a group of "teens" who are camping near Crystal Lake in search of a bunch of marijuana plants that they know are in the area. Later that night, the group of kids are busy exploring the Camp and partying when Jason starts attacking them one by one. We see him viciously kill each teen, except for Whitney. We see him swing his machete at her, and then it cuts to the title card.
Once again, we cut to six weeks later and are introduced to another whole group of "teens". They are on their way to Crystal Lake to stay at Trent(one of the biggest asshole characters in horror history)'s house. We are introduced to Clay, played by Jared Palalecki, who is on the search for his missing sister. We see him handing out flyers with Whitney's picture on it.
While Clay is on the hunt for his sister and the new group of friends start their partying, Jason doesn't take long to start killing once more.

Acting:
Sure, a few of these characters are infuriating, but that's not the actors fault. I think everyone played their parts very well. There are a few stand outs in this entry for me. We can start with Derek Mears, who plays Jason Voorhees. I love his take on the character so very much. He is big, mean, quick, and intimidating. I would love if he could play Jason again, if they ever get the rights to the franchise figured out. Jared Padalecki (Clay) and Danielle Panabaker (Jenna) carry this film. They have great on screen chemistry. (Disclaimer, I do not watch Supernatural, so this is NOT a biased opinion. I genuinely liked Jared in this film.) I've been a fan of Danielle's forever, because I grew up watching her in different Disney films. Seeing her in a horror film was so new and exciting to me in 2009 and I'm still a fan to this day. I also really enjoyed Amanda Righetti as Whitney. Holy shit, that girl can scream. I loved it.

Fear Factor:
I will not lie, I was 15 in 2009 and pretty new to horror. This version of Jason scared me. He is just so massive, ruthless, and hasty. I also am so glad that they went back to mostly practical kills. Minimal CGI was used as far as I could tell, which is breath of fresh air compared to the last 2 films (I'm really looking at you Jason X). There we are a lot of kills in this entry, since there were two groups of people for Jason to run through.

Originality:
Honestly, besides Jason keeping someone alive, this movie is a pretty run of the mill Friday the 13th film. I am not complaining though. This is the first Friday the 13th film since Part 7 to actually feel like a real Friday the 13th movie. I loved all of the homages to the series as a whole, but I appreciate the new stuff that they did too. I loved that they basically made this a reboot of parts one, two and three into one. We get to see Pamela, sack head Jason, and how he gets his hockey mask in this one entry. I like how Whitney is a nice nod to Ginny (Friday the 13th Part 2's final girl), keeping her alive because she reminds him of his mother. I'd also like to point out that Jason isn't a complete idiot in this entry. There is a scene where Clay asks a redneck if he has seen Whitney. He says no, but someone has been stealing kerosene from his boss. Then later, we see Jason flip a switch turning on all of camps lights, with the help of a working generator. Hello good writing, I see you and I appreciate you.

Overall:
If it isn't totally obvious, I'm a huge fan of this entry. I always have been. I do not understand fans that don't at least like this film. It feels so much like the first seven movies in this series. It has the camp, the lake, Pamela, sack head Jason, the hockey mask, so many kills, well developed characters, and a solid story line that DOESN'T TAKE PLACE IN SPACE. What more could you want? I'm so glad I got to finish up this series on a positive note. Thank you Halloween Haunts 365 for letting me review this awesome series as my debut to this website.

I'm going to let you guys know that next week, I will be reviewing Hell Fest (2018) in case you wanted to watch it before my review comes out! "A masked serial killer turns a horror-themed amusement park into his own personal playground, terrorizing a group of friends while the rest of the patrons believe that it is all part of the show." It stars Tony Todd (Candyman) and Bex Taylor-Klaus (Scream the TV series). If you haven't seen it, check it out first, then tune in next week for my review of it!