What does John Wayne Gacy have to do with Haunted Attractions? 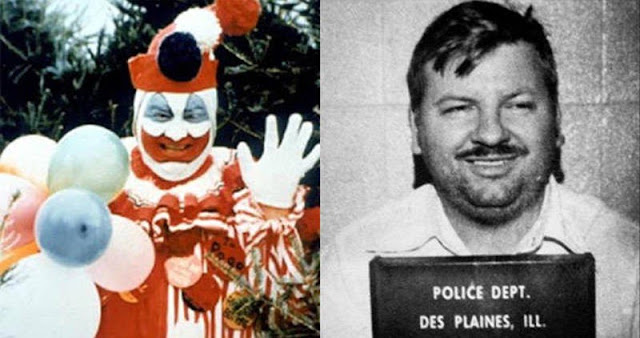 Welcome back everyone! We are so excited to see the growth of this site in just a few hard worked weeks. We hope you are enjoying the new website as we are bringing it to you day after day. Lets get to this pretty dark post.

John Wayne Gacy. Everyone knows who he is and what he did. "The Killer Clown" or "Pogo The Clown" was one of the most notorious Serial Killers the country has ever seen. With an estimated kill count of over 30 people, Gacy will forever be in the lure of the weird fascination of Serial Killers.

The first thing that comes to mind with the concept of this different kind of post, Gacy really enjoyed dressing up as a creepy clown. He did this he said to bring children joy. I really think it was the other way around. I believe he wore this outfit to scare the shit out of little kids in the area. Look at the picture, there is nothing fun about that clown. Looks like Ronald McDonald from hell. Gacy, I believe got his pleasure from horrifying kids and then later his victims. Much like what we do in Haunted Attractions. Oh! and look at that! Almost every single Haunt has a Clown scene and or clowns rummaging around the grounds. That is our first connection to Haunted Attraction and Pogo.

The second thing that just randomly blasted into my head. John Wayne Gacy was a very supportive member of the Jaycees. What most people that just enjoy Haunts do not understand is that the Jaycees are responsible for the type of Haunts we enjoy today. They built them all over and used them to fund-raise for the group. These were the first kind of Haunted Houses that were done year after year outside of the Haunted Mansion. It was one of their biggest fundraisers of the year. So, with that being said and as horrible as it may sound. There is a very good chance that "The Killer Klown" may have helped setup or design or worst of all, worked in one of these Haunted Attractions. It was the same time period and the same area. It is something to think about.

Sorry for the Dark post today, I was thinking about this while sitting in the airport because that is just what my mind does! Hope you may have learned something new!