The Greatest Location For a Haunted Attraction is for sale...Who is in? 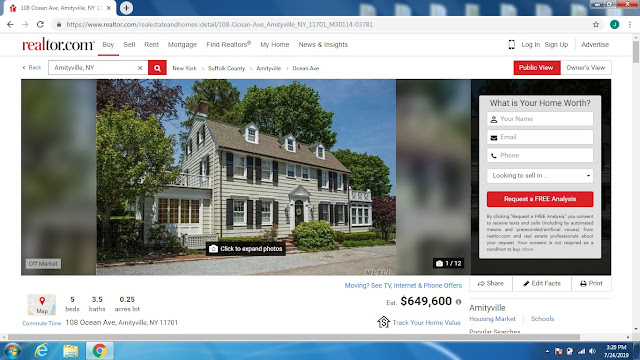 Welcome Back Everyone! Thanks to Realtor.com, we can see that the Amityville House is on the market....Again! At a 200 thousand dollar discount, 649k is a steal for a Long Island property on water. This property once sold for 1.2 million dollars. Then they were asking for 850K, now its all the way down to 650,000 dollars. That is very interesting to me. How come none of the other owners but the Lutz family have reported any issues with the house but yet a property worth well over a million dollars is coming close to dropping in half? We are talking 5 bedrooms and 3.5 baths on the water in Long Island.

I have believed for some time that there is something not really clear about this property, we have mentioned it recently in what really happened the night Ronnie Defeo killed his entire family and the Lutz family sent into a Infamous Status. Again, like for George Lutz. The Amityville home is a steal again.

This site would profit through the roof as an Haunted Attraction. You would bring people from all over the world every September, October and November every single year. This could open 7 days a week and you will fill it every time.

There are many Haunts set in Real Time Haunted locations but this would be the best ever. This house would do 5 times the amount of Eastern State, Waverly Hills, Pennhurst an d many more Haunted Haunted Attractions.

The house is huge. If you were to add Haunt panels, you could make a very long and detailed Haunt.

Thanks for stopping by to HH365. Keep it here for everything odd and creepy.  Thanks again.
Posted by Halloween Haunts 365 at 3:36 PM